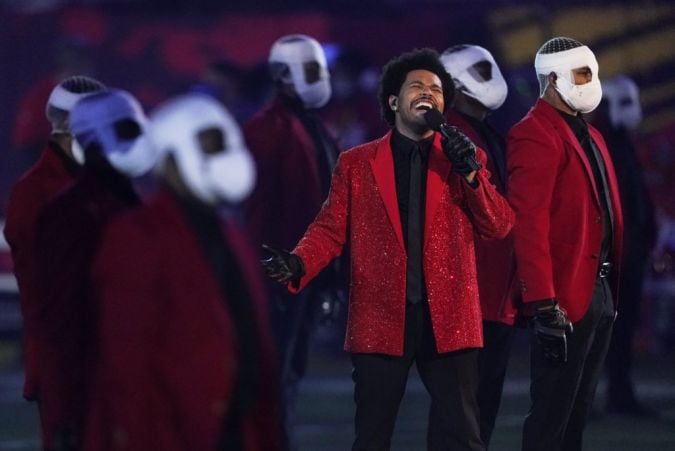 The Weeknd performs during the halftime show of the NFL Super Bowl 55 football game between the Kansas City Chiefs and Tampa Bay Buccaneers, Sunday, Feb. 7, 2021, in Tampa

The real winner of the Super Bowl was not, in fact, the Tampa Bay Buccaneers, but The Weeknd, who brought down the house with a spectacular half-time show.

The Canadian singer/songwriter pulled out all the stops in Florida, enlisting a fleet of doppelganger dancers for the performance, which included hits such as Can’t Feel My Face and Blinding Lights.

Sporting his signature red suit jacket, the 30-year-old – real name Abel Tesfaye – was suitably attired. It’s not the only time the stylish singer has impressed with his sartorial choices…

On the Oscars red carpet

Keeping it classic at the 2016 Academy Awards, The Weeknd donned a dapper black tuxedo, white shirt and bow tie by Dior Homme.

At the Victoria’s Secret show

Making headlines at the Victoria’s Secret catwalk show in 2016, the singer performed while his ex-girlfriend, model Bella Hadid, strutted down the runway. Tesfaye chose a sporty all-black ensemble for the occasion, teaming jeans and a black bomber jacket with leather trainers.

While many would think a sharp suit was in order for an appearance on the cover of Time magazine, The Weeknd kept it casual in a denim jacket. This wasn’t just any old jacket, however, the faded blue denim number was by Tom Ford.

In 2020 The Weeknd collaborated with US streetwear brand A Bathing Ape, creating a capsule collection with his record label XO. The stand-out piece? It’s got to be this edgy, American football-inspired black and orange jacket.

The After Hours suit

Before the sparkly Super Bowl upgrade, The Weeknd debuted his red tailored look to coincide with the launch of 2020 album After Hours, the jacket made by Fresh aka tailor Patrick Henry.

Tesfaye explained the scarlet blazer, black shirt and tie, leather gloves and square sunglasses combo, is the costume of a character he’s playing. Whatever the reason, we love the lounge singer-chic vibes of the ensemble.

Switching it up for a Variety cover shoot in 2020, The Weeknd donned a grey pinstripe three piece suit with a white shirt, contrasting polka dot tie and red corsage. While the look made a change from the ubiquitous red jacket, it still captured the retro-cool vibes of After Hours.