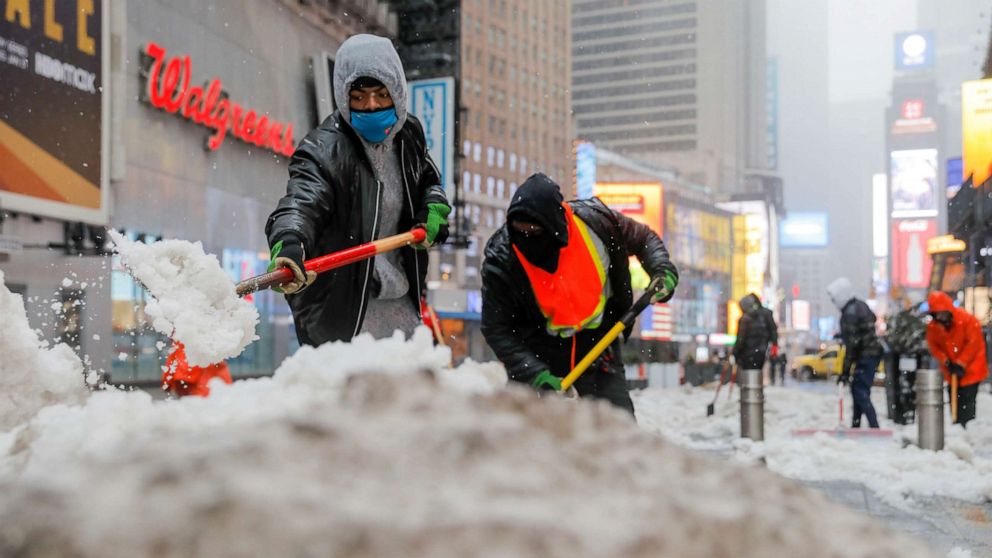 Two weather stories continue to unfold across the U.S. this weekend, one being a winter storm moving into the northeast and the other being polar air in the midwest that will linger through the week.

The trailing cold front from the storm is bringing some severe weather to parts of Florida and a tornado watch has been issued for parts of the state until 7 a.m., including Tampa Bay which is hosting the Super Bowl.

Heavy snow moved through the mid-Atlantic and began to push into the major northeast cities Sunday morning.

Snow accumulated from the Appalachian Mountains and along much of the I-95 corridor into New England.

Snowfall rates could reach 2 inches per hour on Sunday, with the biggest snow totals occurring just outside big cities in the northeast.

More than half a foot of snow is being reported northwest of Philadelphia and New York City.

New York City has gotten about three inches of snow so far, while Philadelphia and Baltimore have gotten an inch.

The storm is expected to leave the region in the early evening hours, but dangerous travel conditions will remain.

Lingering precipitation is expected from southeastern New England and up the coast to eastern Maine through the evening and will wrap up by midnight.

Life-threatening wind chills continues to dominate the midwest with wind chills reaching as low as -50.

Wind chills this morning in major cities like Chicago and Indianapolis are well below zero and even parts of the south are getting some of the coldest air of the season with wind chills in the teens and single digits.

The main weather story though will be the brutally cold air that will persist over the central U.S.

Several disturbances will ride the jet stream at the edge of this brutally cold air and bring quick-moving hits of snow across parts of the midwest and northeast this week.

Toward the end of the week, a few more organized systems could bring some widespread winter weather impacts.

The brutally cold air looks like it will expand its grip significantly by the end of the week and will dominate much of the eastern and central U.S. with the East Coast and southern regions seeing well below average temperatures.