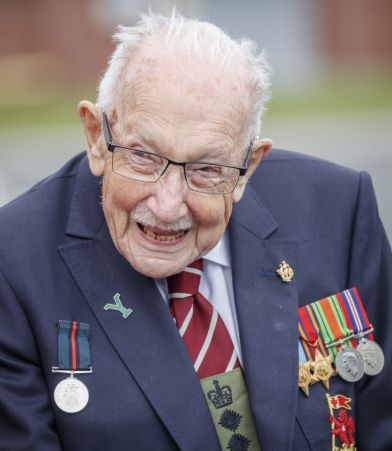 Captain Sir Tom Moore’s daughter has thanked the UK public for their “incredible support” following his death at the age of 100.

Hannah Ingram-Moore described her father as “the best mentor and confidante you could ever wish for” and said the family was still “feeling his absence”.

Sir Tom captured hearts with his fundraising efforts during the first lockdown when he walked 100 laps of his Bedfordshire garden before his 100th birthday, raising more than £32 million (€36.5 million) for the NHS.

A message from Hannah. pic.twitter.com/JtyZPPg3uP

He died at Bedford Hospital on February 2nd after testing positive for Covid-19.

In a message on Twitter on Wednesday, Ms Ingram-Moore said: “On behalf of my family, I would like to say an immense and heartfelt thank you to everyone for their incredible support during our time of sadness at the loss of my father.

“Captain Sir Tom was simply father, Tom and grandad to us. He was our world.

“We lived at home as an inter-generational family for over 13 years and although, like many, we weren’t perfect we were perfectly happy.”

She described Sir Tom as “strong, kind and full of humour”, and as someone “who loved nothing more than to cook, mow the lawn, mend things and give sound advice”.

“There is little pain that compares to losing someone you love and each one of us is feeling my father’s absence,” Ms Ingram-Moore added.

“Nothing can prepare you for that sudden wrench when their time comes to leave.

“Not hearing his chuckle in the house, catching the mischievous twinkle in his eye, hearing the shuffle in the corridor of his now-famous walking frame.

“We are already missing his routines, like surreptitiously feeding the dogs porridge out of his bowl or sitting in the kitchen every day to have lunch and asking us how our day is going.

“It’s the little noises and habits of people close to you that suddenly become deafening in their absence.”