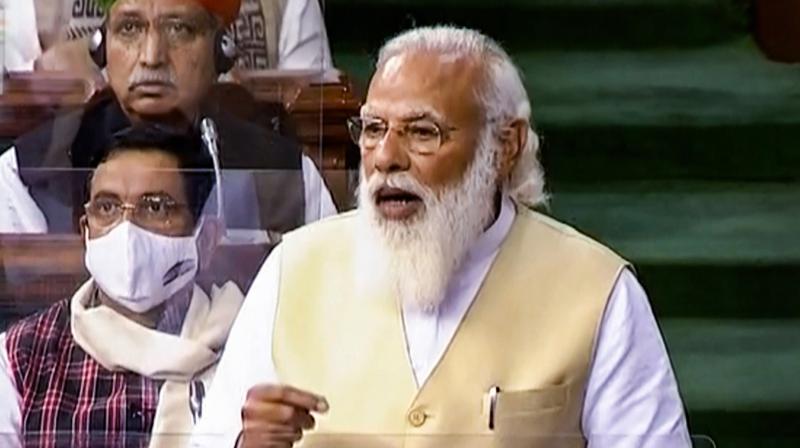 New Delhi: Prime Minister Narendra Modi’s response to the motion of thanks on the President’s address in the Lok Sabha Wednesday was overtaken midway by angry Opposition protests as he referred to the farm laws. The Congress, after a huge altercation, walked out shortly after he said the slogan-shouting “was a planned strategy to drown out reason and hide the truth”.

The protests started as Mr Modi, after speaking on Covid-19, switched to the farm laws, saying: “This government and Parliament respects farmers and will always continue to respect them.” The motion of thanks on the President’s address was later passed by the Lok Sabha.

The Opposition, which has shredded him over the past two days for comments like “andolanjeevi” and “parjeevi” (parasites) made during his last address, broke out in protests. As Speaker Om Birla repeatedly asked the members to calm down, Mr Modi said: “The farm laws will not bring down any farmers. No mandi has been shut nor have minimum support prices been stopped.” The PM added: “Minimum support prices have been increased after the farm laws were enacted. Moreover, farmers can now sell their goods wherever they want.”

Mr Modi again used the “andolanjeevi” jibe to target protesting farmers, which he had used in his speech in the Rajya Sabha earlier.

There were strong words for the Congress, which the BJP has repeatedly accused of instigating the farmers. “No matter how much you may try to sabotage it, you will fail to do so, because the truth is out there, that the farmers have not lost anything since the laws came into effect,” Mr Modi said, but without naming the Congress.

Mr Modi said the Congress was a “divided and confused” party, saying it was adopting different positions on various issues in the Lok Sabha and Rajya Sabha as it had no clear-cut stand. He said: “The Congress today is a confused and divided party. It has reduced itself to this. Such a confused party cannot help the country or anyone else. You want to shout inside Parliament, just as you do outside, then please go ahead, but hiding behind lies will never get you anywhere.”