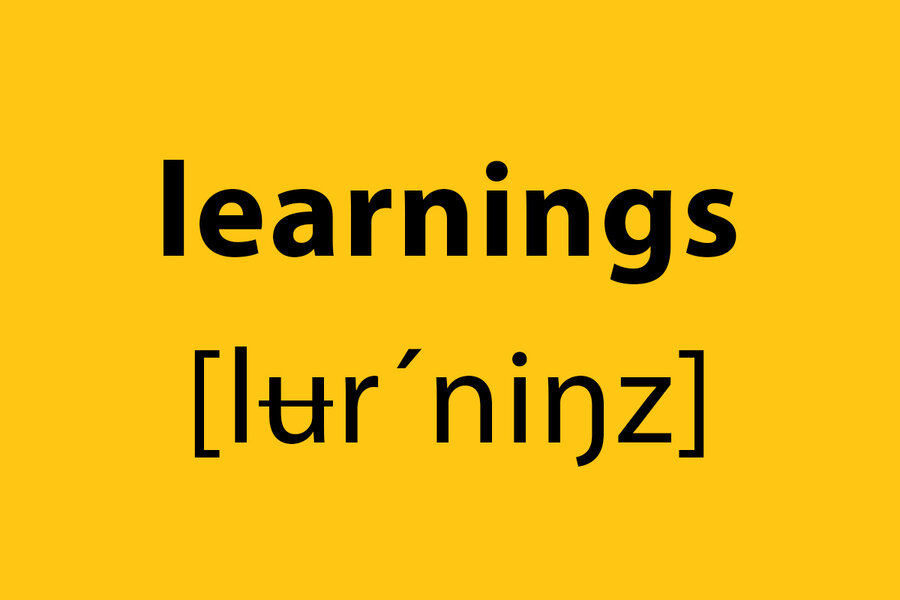 This is a perfectly good sentence: “The philosopher’s teachings were hard to understand.” What about “The philosopher’s learnings were hard won,” though? Few people would object to the first, but the second includes a word that sets many people’s teeth on edge. Learnings makes it onto numerous online lists with titles like “The Most Annoying, Pretentious, and Useless Business Jargon.” What makes teachings unobjectionable and learnings unbearable?

Teachings means “what is or was taught” and learnings “what is or was learned.” Both words are verbal nouns, formed by adding -ing to a verb, and thus can be modified by adjectives and prefaced by articles (“the complicated teachings”). They are also count nouns (“the 8 teachings of Buddhism”). Learning without an “s” – a mass noun – is a common synonym for “knowledge” (“a man of great learning”). As soon as it becomes countable, though – the “top ten learnings … from the COVID-19 pandemic” – you’ve got an entry for Robert Hartwell Fiske’s Dictionary of Unendurable English.

From the 14th century to the end of the 18th century, English speakers found nothing wrong with learnings. One of the first books printed in England (1484) discussed the “three enseignements or learnings” a man gave to his son. Here, learnings means “lessons,” which, depending on perspective, can be taught by a teacher or learned by a student. Enseignements in fact means “teachings” in French.

Originally, the verb to learn was looked at from these two different perspectives as well. It could mean “to absorb knowledge” as it does today, making it the reciprocal action (sometimes called the “converse”) of to teach. But it also meant “to impart knowledge,” making it a synonym of teach too. “He taught them philosophy” and “he learned them philosophy” would have been equally correct until the beginning of the 19th century.

At that point, grammarians began to stress the importance of making distinctions between converses such as lend/borrow and teach/learn. By 1885, when Mark Twain has Huck Finn relate that his guardian “learned me about Moses and the Bulrushers,” this difference was well established – “learned me” signals Huck’s lack of education. Since in the 19th century the mass noun learning was 100 times more common than the count noun learnings, people uneasy with the teach-learn distinction may have erred on the side of caution and rejected learnings along with “learned him.”

Learnings surged in popularity during the 1950s, in business jargon and edu-speak, which did little to make it seem more “correct.” But it is now used widely. We’ll have to endure learnings for the foreseeable future.