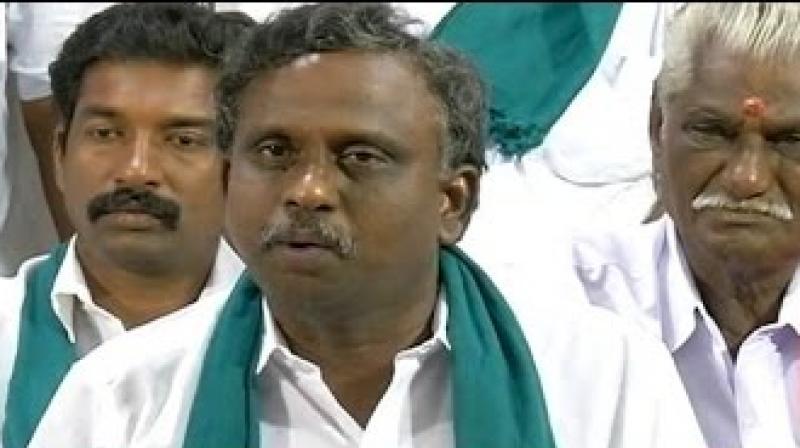 Chennai: Farmers staged protests here and in other parts of Tamil Nadu on Saturday demanding repeal of the farm laws in solidarity with the ryots' nationwide 'chakka jam.'

Leading an agitation here by raising slogans against the Centre and farm laws, president, coordination committee of Tamil Nadu All Farmers' Association, P R Pandian said the protest was for seeking justice. The protests in Tamil Nadu was part of the pan India stir and "this is for seeking justice for farmers, this is not for political purposes or to inconvenience the general public," Pandian told reporters.

Urging scrapping of farm laws, he alleged Prime Minister Narendra Modi worked for the interests of corporates and his government barred farmers from entering Delhi. "If PM Modi does not permit ryots to enter Delhi, farmers would not allow him to visit Tamil Nadu," he said. Reportedly, PM Modi would visit the state later this month to inaugurate several projects and he is also likely to address a poll rally. Pandian said the farmers protest including today's 'chakka jam' is for "fair reasons while the Centre only favoured corporates and not farmers."

In the national capital, the Centre 'disconnected' water and electricity supply to ryots and 'confined' them behind barbed wires, he alleged. Demanding complete removal of barricades, he wanted the government to provide amenities to farmers and not "harass farmers who voted for Modi." The Centre was using police against them and it is condemnable, he added. In Tiruchirappalli, president of the National South Indian Rivers Inter-Linking Farmers Association, P Ayyakannu led a 'plough' rally seeking immediate withdrawal of farm laws.

Farmers organisations staged protests in other regions including the Cauvery delta towns of Thanjavur, Nagapattinam and Tiruvarur.