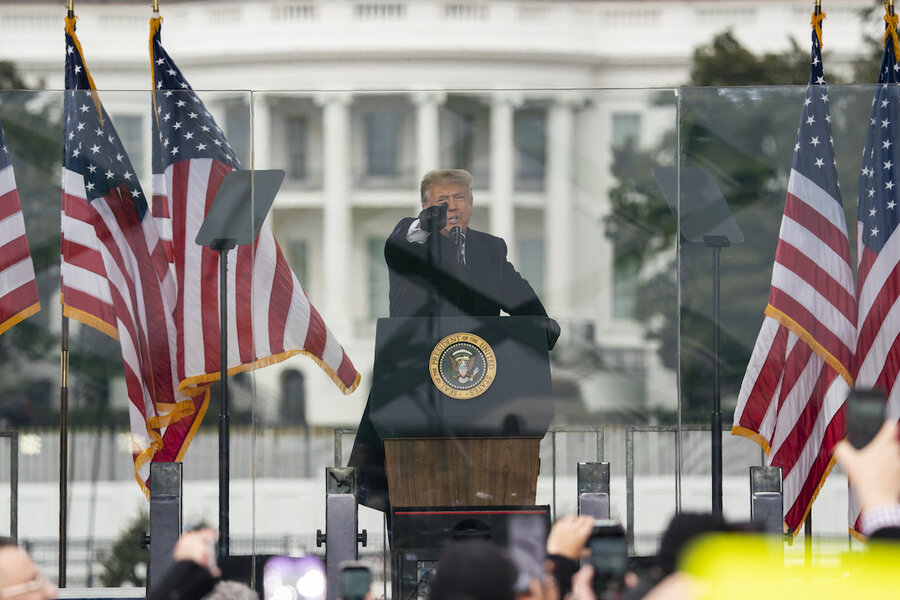 Arguments begin Tuesday in the impeachment trial of former President Donald Trump on allegations that he incited the violent mob that stormed the United States Capitol on Jan. 6.

Below is a look at five key questions about what to expect when senators hear the case against Mr. Trump in the very chamber that was besieged by insurrectionists:

Will he be convicted?

It’s unlikely. While many Republicans were harshly critical of Mr. Trump for telling supporters to “fight like hell” and go to the Capitol, their criticism has since softened.

The shift was evident during a Jan. 26 test vote. Only five Republican senators voted against a motion that was aimed at dismissing the trial.

It will take a two-thirds vote of the 100-member Senate to convict Mr. Trump of the impeachment charge, which is “incitement of insurrection.” If all 50 Democrats voted to convict him, 17 Republicans would have to join them to reach that threshold.

Most Republicans have avoided defending Mr. Trump’s actions the day of the riot. Instead, lawmakers have argued that the trial is unconstitutional because Mr. Trump is no longer in office. Democrats and many legal scholars disagree.

After the January test vote, many Republicans indicated Mr. Trump’s acquittal was a foregone conclusion.

“Do the math,” said Maine Sen. Susan Collins, one of the five Republicans who voted to move forward with the trial. Sen. Lindsey Graham, R-S.C., said he thought the vote was a “floor not a ceiling” of Republican support to acquit.

Still, some Republicans said they were waiting to hear the arguments at trial. Ohio Sen. Rob Portman voted for the effort to dismiss, but said that constitutionality “is a totally different issue” than whether Mr. Trump is guilty of incitement.

Can Mr. Trump’s lawyers mount a defense without offending the Senate?

It’s a tough needle to thread. Mr. Trump’s team probably will try to remove the emotion from the case and focus on legal and practical arguments against conviction.

In their first filing for the trial, his lawyers made clear that they will challenge the constitutionality of the trial now that Mr. Trump has left the White House. That could give an out to Republican senators who are inclined to acquit the former president without condoning his behavior.

The defense could also argue the trial is pointless with Mr. Trump no longer president, because removal from office is the automatic punishment for an impeachment conviction. Democrats note that after a conviction, the Senate also could bar Mr. Trump from holding public office in the future.

To the extent that defense lawyers are forced to grapple head-on with the violence and chaos of Jan. 6, they probably will concede the horror of that day but blame it on the rioters who stormed the Capitol. Mr. Trump’s lawyers assert that Mr. Trump never incited the insurrection.

Can impeachment managers get through to skeptical Republicans?

It won’t be easy. For the prosecutors, the bottom line is that the riot wouldn’t have happened without Mr. Trump, so he must be held to account.

It’s a simple case that Democrats feel doesn’t need to be exaggerated, especially because five people died amid the chaos, and senators were victims themselves. The Senate quickly evacuated just as the insurrectionists were pushing up stairwells close to the chamber. Once senators were gone, rioters broke in and rifled through the lawmakers’ desks.

In a brief filed this past week previewing their arguments, the House impeachment managers used stark imagery and emotional appeals to argue Mr. Trump’s guilt.

Their filing said senators were “feet away” from the swarming rioters, and noted that those outside “wearing Trump paraphernalia shoved and punched Capitol Police officers, gouged their eyes, assaulted them with pepper spray and projectiles.”

In the House, the impeachment managers wrote, “terrified members were trapped in the Chamber; they prayed and tried to build makeshift defenses while rioters smashed the entryway … some Members called loved ones for fear that they would not survive the assault by President Trump’s insurrectionist mob.”

Those scenes will be brought to life at the trial. Prosecutors are expected to play video of the attack during their presentations.

Will we hear from Mr. Trump himself?

That doesn’t seem likely. He’s rejected through his lawyers a request by impeachment managers to testify. A subpoena seeking to compel his testimony isn’t expected at this point.

Mr. Trump also no longer has access to Twitter, which he relied on extensively during his first impeachment trial last year to attack the case against him and to retweet messages, videos, and other posts from Republicans haranguing Democrats.

With Mr. Trump at his Florida resort, his lawyers will be left to make arguments on his behalf. Democrats pledged to hold Mr. Trump’s unwillingness to testify against him at trial, but the argument may not resonate. It’s not clear that Republican senators – even the many who are likely to acquit him – really want to hear from him.

What happens if Mr. Trump is acquitted?

The likelihood of Mr. Trump’s acquittal worries some senators, who fear the consequences for the country. Some have floated the possibility of censuring Mr. Trump after the trial to ensure that he is punished in some way for the riot.

But there also may be another way for Congress to bar Mr. Trump from holding future office.

In an opinion piece published last month in The Washington Post, Yale law professor Bruce Ackerman and Indiana University law professor Gerard Magliocca suggested Congress could turn to a provision of the 14th Amendment that is aimed at preventing people from holding federal office if they are deemed to have “engaged in insurrection or rebellion against” the Constitution.

The professors wrote that if a majority vote of both houses agree that Mr. Trump engaged in an act of “insurrection or rebellion,” then he would be barred from running for the White House again. Only a two-thirds vote of each chamber of Congress in the future could undo that result.