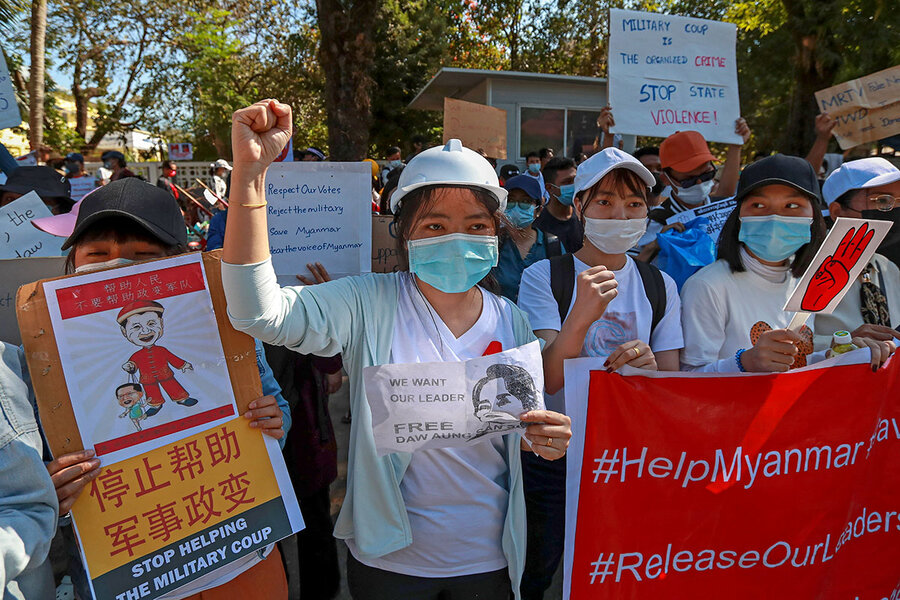 Indeed, China’s official statements on Myanmar have reflected a concern over stability. “We hope that all parties in Myanmar will properly handle their differences under the constitutional and legal framework and maintain political and social stability,” said Foreign Ministry spokesman Wang Wenbin.

And although Beijing reportedly opposed a statement by the United Nations Security Council condemning the coup, it signed onto one voicing “deep concern at the declaration of the state of emergency imposed in Myanmar by the military … and the arbitrary detention of members of the Government, including State Counsellor Aung San Suu Kyi.” The U.N. statement called for the immediate release of all those detained and pressed for “continued support of the democratic transition in Myanmar.”

To be sure, China’s overarching goal in Myanmar and other nearby countries is to deepen its influence while weakening that of the United States, experts say. And Beijing has moved aggressively in recent months and years to strengthen control over border regions such as Xinjiang and Hong Kong while pressing territorial claims along the frontier with India and in the South China Sea.

In Southeast Asia, China is “trying to consolidate their sway over their neighbors all around their periphery, and also … to drive wedges with the United States,” says David Lampton, senior fellow at the Foreign Policy Institute of the Johns Hopkins School of Advanced International Studies (SAIS).

Yet in Myanmar, the best way to achieve such ends may not be backing a military coup, especially given the strong ties and leverage Beijing had built with Ms. Aung San Suu Kyi and her government, analysts say.

Chinese leader Xi Jinping made a state visit to Myanmar in January 2020, and the two nations were enjoying cooperation on issues ranging from major infrastructure projects to resolving refugee problems caused by ethnic and sectarian conflicts. China has defended the Myanmar government over the crisis in Rakhine state, where the armed forces have waged a campaign of ethnic cleansing against the mostly Muslim Rohingya population.

Beijing showed its pragmatism in working to build ties with Ms. Aung San Suu Kyi and her semi-democratic government, in which Ms. Aung San Suu Kyi was the de facto leader but the constitution guaranteed the Burmese military control over key ministries and veto power in parliament. “The Chinese were doing what they always do, trying to build as many connections in as many directions as they can,” says Dr. Lampton, a professor emeritus of China studies at SAIS.

Analysts say internal politics was the main driver of the coup, which followed the landslide election victory in November of Ms. Aung San Suu Kyi’s National League for Democracy – a victory disputed by the military-backed opposition party.

The coup has again put China in the position of having to stand up for the regime as its longtime “friendly neighbor,” although this support has undermined Beijing’s image in Myanmar and overseas.

“Burmese public opinion sees China as a supporter of propping up the military once again and abandoning the ‘lady’,” says Ms. Sun, using a nickname for Ms. Aung San Suu Kyi. “This puts China in opposition to the Burmese people.”

Hundreds of anti-coup protesters demonstrated outside the Chinese Embassy in Yangon on Thursday, holding posters calling on Beijing to “support Myanmar, don’t support dictators,” according to Reuters.

For its part, the nationalistic Burmese military has demonstrated over the years that it harbors deep suspicions of China’s intentions in the country, a worry shared to different degrees by many Southeast Asian governments. The military is nervous about Beijing’s alleged backing for insurgent militia groups along the border, and has in the past stirred up anti-Chinese sentiment. It has also canceled infrastructure projects central to China’s interests in the country.

In contrast, Ms. Aung San Suu Kyi’s government entered into major infrastructure projects with China, including the China-Myanmar Economic Corridor – an initiative worth billions of dollars that includes a railway and deep-water port – as part of China’s Belt and Road project. It had also signed the Regional Comprehensive Economic Partnership free trade agreement that includes China, Myanmar’s biggest trading partner.

One of China’s major strategic goals in Myanmar is to gain access, through ports and pipelines, to the Indian Ocean, and thereby reduce dependence on the potential chokehold of the Strait of Malacca.

“China’s interest in Myanmar is connectivity. If it becomes an international pariah, then what can China connect to?” asks Ms. Sun.