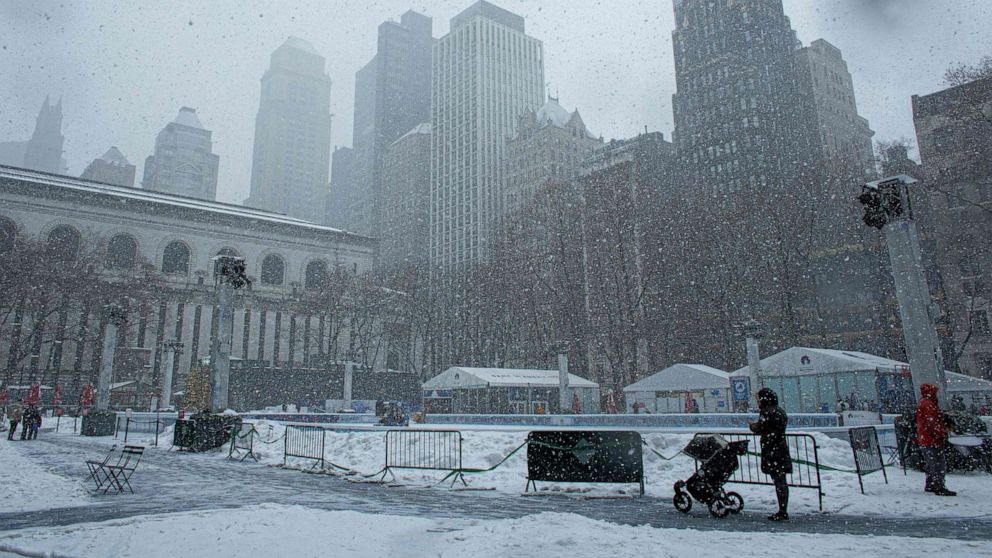 A very active cold and dangerous weather pattern remains locked in place over the central and eastern U.S.

First, the Arctic air over the Midwest will persist through the rest of the week and into the weekend and there are wind chill alerts from Montana to Illinois this morning for dangerous wind chills and, even though some “moderation” is likely for a couple days, it will be bitterly cold and temperatures are going to remain well below average.

Chicago is seeing their longest stretch of sub-freezing temperatures since 2018 and the Twin Cities in Minnesota is also seeing a prolonged period of sub-zero temperatures.

On Tuesday, wind chills across the upper Midwest are as low as nearly -30 and, in parts of the Northeast, wind chills are in the teens.

On the edge of the Arctic air where we find the jet stream, several disturbances will move from the central U.S. to the eastern U.S. over the next week.

This morning, some light to moderate snow is moving across the Northeast and locally 3 to 6 inches of snow will be possible from Pennsylvania to Massachusetts.

Another disturbance will develop in the southern Plains Wednesday morning where a wintry mix of snow and freezing rain spread across Oklahoma to Kentucky.

Over the day on Wednesday and then into Thursday, the snow and ice will stretch East.

There is a chance for a significant ice storm to develop through parts of the Mississippi Valley and into the Ohio valley which could cause major road concerns as well as power outages especially from Missouri to northern Arkansas and into Kentucky.

As the snow heads towards the East Coast, rounds of light to moderate snow are possible from the Ohio and Kentucky border to the Delmarva peninsula where locally up to and over 6 inches of snow will be possible.

An even more formidable and organized storm appears likely this weekend and then at least two more are possible next week as Arctic air continues its grip in parts of the central U.S.