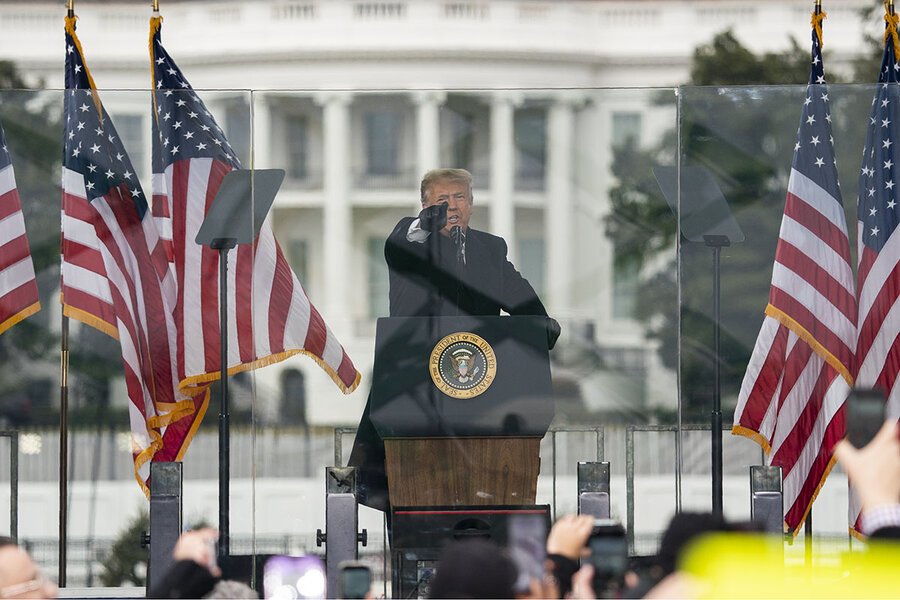 At former President Trump’s impeachment trial in the Senate, which begins Tuesday, the question of what motivated a mob to take concrete action and storm the U.S. Capitol on Jan. 6 will be a central question. In particular, House impeachment managers will argue that rioters believed Mr. Trump’s speech had indicated the assault was something he wanted them to do.

Mr. Trump had begun to set the stage months earlier with his false insistence that he had actually won the November election and Democrats had stolen the White House via massive voting fraud. Then, while still president on Jan. 6, Mr. Trump appeared onstage at a rally at the Ellipse and “whipped” the crowd “into a frenzy,” according to the House impeachment trial brief.

He exhorted followers to “fight like hell [or] you’re not going to have a country anymore.” Then he aimed them straight at the Capitol, according to the House brief, and said, “You’ll never take back our country with weakness.”

“Incited by President Trump, his mob attacked the Capitol,” the House brief concluded.

In response, attorneys for Mr. Trump in a defense brief released Monday argue that his speech “did not direct anyone to commit unlawful actions” and that he should not be blamed that a small group of “criminals” stormed the Capitol after his rally appearance. In addition, Mr. Trump’s defense claims that the articles of impeachment violate his First Amendment rights to free speech.

However, free speech is not an absolute right, note First Amendment experts. Mr. Trump’s words would not be protected if a court case determined they led to the Jan. 6 insurrection.

Prosecution of incitement is not easy, however. Ken White, a First Amendment litigator and criminal defense attorney at Brown, White & Osborn LLP, says that in court the former president would be held to the same standard as all Americans: the Brandenburg test.

Under Brandenburg the government may prohibit advocating the use of force or crime if the speech meets both elements of a two-part test: The speech is “directed to inciting or producing imminent lawless action,” and the speech is “likely to incite or produce such action.”

Did Mr. Trump’s words meet both those criteria, and cause the riot? His lawyers argue that they did not, because they did not “specifically advocate” for unlawful action.

Viewed in the full context of Mr. Trump’s months of disinformation about the election and damaging rhetorical attacks on democracy prior to Jan. 6, among other things, his speech did meet Brandenburg criteria for illegality, says Mark Kende, director of Drake University’s Constitutional Law Center and an expert on the First Amendment.

But Mr. Trump is not being tried in a courtroom. He is being tried in the U.S. Senate. The distinction is a crucial one, as impeachment, under the Constitution, is a political question, not a legal one, strictly speaking.

“History makes it fairly clear that high crimes and misdemeanors, for which you can be impeached, is broad and it’s more or less what the House and Senate want it to be,” says Mr. White of Brown, White & Osborn.

There is precedent for citing speech in impeachment proceedings. One of the articles of impeachment issued against President Andrew Johnson in 1868 focused on his incendiary speeches.

There are free speech norms, in addition to free speech laws, and it’s the former that the Senate will be looking at in the upcoming trial of Mr. Trump, says Mr. White. While voters might like to believe that its calculations will be based on nuanced application of historical and legal precedents, that’s unlikely to be the case.

The only real limit to political speech is what your voters let you say before turning against you, and in the case of Mr. Trump, his supporters give him plenty of leeway. The same is true for a new generation of politicians who are following in Mr. Trump’s footsteps, such as Rep. Marjorie Taylor Greene, Republican of Georgia.

Representative Greene is a first-term member of Congress with an affinity for conspiracy theories. Prior to election last November, she promoted wild social media claims that mass shootings in Las Vegas and Florida were “false flag” operations staged by gun control supporters. She’s endorsed posts calling for the assassination of House Speaker Nancy Pelosi.

Ms. Greene has been implicitly rebuked by top establishment Republicans such as Senate Minority Leader Mitch McConnell, who recently condemned her “loony lies.” But many House colleagues have continued to support her, and last week the House GOP caucus declined to punish her by stripping her of committee assignments.

The Democratic majority in the House, with a smattering of Republican support, then voted to do just that. It was an unprecedented rebuke, given that committee slots are traditionally set by a member’s own party, not the full chamber.

Ms. Greene last week responded that she was “sorry” for some of her past conspiratorial statements, but also said she was happy to be booted off her committee work, because as a member of the conservative minority she’d have been “wasting my time” on the panels and now she’d have more hours to talk and build support around the country.

This may be an example of a cycle of stimulus and response that is increasingly sparked by politicians who have followed Mr. Trump’s lead and harnessed the power, and divisiveness, of words.

They say something their followers love, but that alienates much of the rest of the public. Their followers dig in while the opposition does too. The more outrageous the statement, the more entrenched the response.

Then this equilibrium leads to a more radicalized country, says Mr. White.

The debate over “cancel culture”

Conservatives have their own complaints about the perceived damages of a new equilibrium. In their words, the danger is “cancel culture,” a loosely defined phenomenon in which jobs are lost or reputations trashed or books and speech dates withdrawn over remarks or writings that liberals deem beyond the pale.

“I think that [cancel culture] is probably the most dangerous thing to our political process, because it’s almost this mob mentality,” Rep. Madison Cawthorn of North Carolina, a freshman elected in 2020 as a Trump supporter, told the Monitor’s Story Hinckley late last year.

Since then, speech fallout from the Jan. 6 attack on the Capitol has included the deplatforming of then-President Trump from Twitter, Facebook, and other social media; the mass banning of QAnon and Capitol-assault-related accounts from many sites; and the collapse of Parler, which had shown promise of becoming a right-wing-dominated Twitter clone.

This is not cancel culture so much as simply culture, say some experts. The rise of the #MeToo movement and Black Lives Matter protests, and other longer-range societal changes such as the acceptance of gay marriage, have changed, among other things, the parameters of acceptable speech.

“We are seeing a world in which people are more aware of the potential harms that speech can cause that are beyond just violence,” says Mr. Kende of Drake University.

The country still has work to do in terms of deciding where, exactly, to draw lines. This has not been helped by the explosion of social media, a forum that allows people, indeed encourages them in some ways, to engage in increasingly provocative speech.

It “has contributed to an environment in which there are more outrageous statements that are being allowed,” Mr. Kende says.