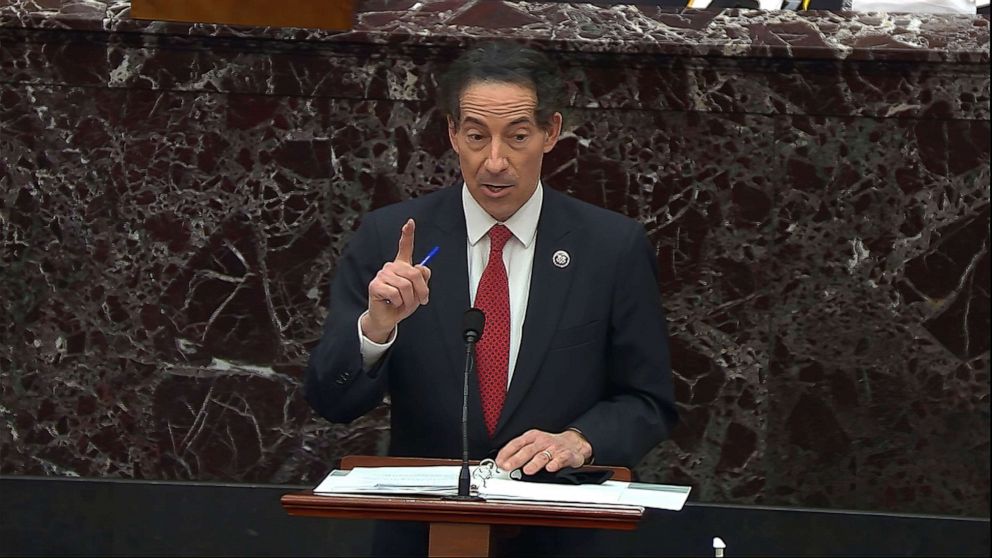 Even an emotional prosecution and a mess of a defense may not change the Senate math.

But while so many of the facts around the second impeachment trial of former President Donald Trump are settled, a key question is emerging that could matter beyond final votes on conviction.

For all that is established about what rioters did, why they did it and even what Trump said to seemingly encourage them, what the then-president did in the hours that the attack was ongoing is a key piece of the case being assembled by House managers.

There’s the belated and half-hearted video Trump released on the afternoon of Jan. 6. There’s also what might be the most consequential — and one of the final – tweets of his presidency, from 6:01 p.m. ET that evening: “These are the things and events that happen when a sacred landslide election victory is so unceremoniously & viciously stripped away… Remember this day forever!”

Trump’s attorneys said explicitly Tuesday that no one will defend the atrocities of that day, which indeed is being well-remembered. Their legal brief claimed that Trump was immediately “horrified” by the events at the Capitol, notwithstanding what’s publicly known about his mindset and actions that day.

They also conceded that Trump lost the election to President Joe Biden, something Trump himself has failed to do now — and the exact opposite of what he was falsely claiming on the day the riot took place.

It’s been a long month-plus since then, with short memories revived now by the trial. Establishing the facts of Trump’s actions will matter even after the trial is complete.

Split screen moments happen frequently in politics and Tuesday in Washington was no exception. As the former president’s legal team began presenting their case in his historic, second impeachment trial, at the White House, Trump’s successor barely acknowledged the proceedings.

“Look, I told you before. I have a job,” President Joe Biden said when asked if he would watch the trial. The president reiterated his main job is to help Americans pull through the pandemic and he closed the door on any future comments about impeachment proceedings.

“The Senate has their job. They’re about to begin it. I’m sure they’re going to conduct themselves well. And that’s all I’m going to have to say about impeachment,” Biden said.

Biden’s reluctance to weigh in on Trump’s impeachment trial parallels his plans to keep a busy schedule. In doing so, Biden is effectively showing the public what he thinks of Trump’s legacy rather than verbally commenting on it in the context of impeachment. The distance also signals a deference to Biden’s goal of political unity, which will be crucial in achieving his many policy goals well after the trial concludes.

In addition to the ongoing pandemic relief negotiations, the White House says the president plans to prioritize visits to the Pentagon and the National Institutes of Health to address challenges related to the coronavirus and national security. He’s also preparing to make the first official trip of his presidency next Tuesday when he heads to Wisconsin, a 2020 battleground state Biden won and whose election results Trump contested.

Beyond the boundaries of Washington, where the Senate proceedings are testing the durability of Trump’s grip on members of his own party, the former president’s wing of the GOP scored an early win over the establishment in deep red Arkansas.

It’s a sign of the power of a Trump endorsement in still Trump-friendly territory, where he won the state by nearly 30 points last fall. Sanders earned the endorsement of her former boss hours after she launched her campaign, which is heavily rooted in Trump’s culture war tactics and far-right rhetoric. “Everything we love about America is at stake. With the radical left now in control of Washington, your governor is your last line of defense,” she said in her announcement video.

Sanders now finds herself on stronger footing to earn the nomination after Griffin’s departure. But it’s not a lock just yet, with Attorney General Leslie Rutledge — another contender vying to claim the mantle of Trumpism as a staunch supporter of the former president — not showing any signs she’s ready to bow out.

At Trump’s second impeachment trial, a core argument made by the former president’s legal team is that the trial is unconstitutional because he is no longer in office. But at campaign rallies amid his reelection push, Trump himself repeatedly targeted former President Barack Obama, calling for his predecessor to be impeached despite being out of office for years, even joking about a “belated impeachment.”