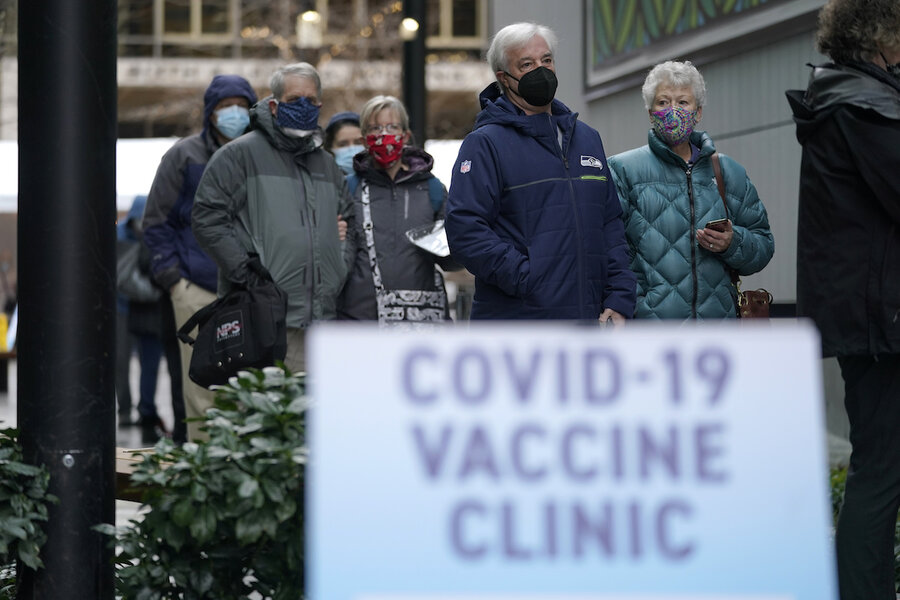 About 1 in 3 Americans say they definitely or probably won’t get the COVID-19 vaccine, according to a new poll that some experts say is discouraging news if the United States hopes to achieve herd immunity and vanquish the outbreak.

The poll from The Associated Press-NORC Center for Public Affairs Research found that while 67% of Americans plan to get vaccinated or have already done so, 15% are certain they won’t, and 17% say probably not. Many expressed doubts about the vaccine’s safety and effectiveness.

The poll suggests that substantial skepticism persists more than a month and a half into a U.S. vaccination drive that has encountered few if any serious side effects. It found that resistance runs higher among younger people, people without college degrees, Black Americans, and Republicans.

Dr. Anthony Fauci, the government’s leading infectious-disease scientist, has estimated that somewhere between 70% and 85% of the U.S. population needs to get inoculated to stop the scourge that has killed close to 470,000 Americans. More recently, he said the spread of more contagious variants of the virus increases the need for more people to get their shots – and quickly.

So is 67% of Americans enough?

“No. No, no, no, no,” said William Hanage, a Harvard University expert on disease dynamics. He added: “You’re going to need to get quite large proportions of the population vaccinated before you see a real effect.”

Nearly 33 million Americans, or about 10% of the population, have received at least one dose, and 9.8 million have been fully vaccinated, according to the Centers of Disease Control and Prevention.

Of those who said they definitely will not get the vaccine, 65% cited worries about side effects, despite the shots’ safety record over the past months.

Of those who probably will not get the vaccine but have not ruled it out completely, 63% said they are waiting to see if it is safe, and 60% said they are concerned about possible side effects.

“I don’t trust pharmaceuticals. I really don’t. And it doesn’t sound like it’s going to be safe,” said Debra Nanez, a retired nurse from Tucson, Arizona.

Ms. Nanez said she has gotten flu and pneumonia shots but is concerned about rumors about what’s in the coronavirus vaccine, and her friends have the same hesitation.

“It would take a while for me to do research on it to make sure it’s safe. I just don’t want to take anything that’s going to harm me,” she said.

Baron Walker, a laid-off insulation installer from Parkersburg, West Virginia, said he is in the “probably not” column, at least for now.

He said that if he were elderly, or lived in a densely populated area, he might consider the vaccine more strongly. But he is in rural part of the country, he has been wearing a mask and social-distancing, and he feels there is a good chance the nation will achieve herd immunity, he said.

“I feel like I have plenty of time before I get a chance to get [the vaccine] anyway, to find out if there are bad side effects and whether it’s even worth getting it,” Mr. Walker said.

In interviews, some Americans expressed concerns about the revolutionary speed with which the vaccines were developed – less than a year.

“I feel like they rushed it,” Mr. Walker said.

That was echoed by Matt Helderman of Greer, South Carolina.

“I’d like to see more safety data,” said Mr. Helderman, a video editor and associate producer for a Christian TV program. He also said that he would like to see more clarity on whether the vaccine is effective against new variants.

Health officials are trying to counter concerns about the vaccine with science.

The latest evidence indicates that the two vaccines being used in the U.S. – Pfizer’s and Moderna’s – are effective even against the variants, Dr. Fauci said.

Also, while the development of the vaccines was unusually fast, it was the culmination of many years of research. And the vaccines went through clinical trials involving thousands of people who were monitored for 60 days after their last dose. Studies of other vaccines have found that harmful side effects almost always materialize within 45 days.

“Safety certainly was not compromised, nor was scientific integrity compromised,” Dr. Fauci said. “Many have reason for skepticism. But I think that when you explain the facts and the data to them, you can win them over.”

Black Americans appear less likely than white Americans to say they have received the shot or will definitely or probably get vaccinated, 57% versus 68%.

Among Hispanic Americans, 65% say they have gotten or plan to get the vaccine.

Public health experts have long known that some Black Americans are distrustful of the medical establishment because of its history of abuses, including the infamous Tuskegee study, in which Black patients with syphilis were left untreated so that doctors could study the disease.

Americans without a college degree are more likely than college-educated ones to say they will definitely or probably not get vaccinated, 40% versus 17%.

And Republicans are more likely than Democrats to say that, 44% versus 17%.

Note: The AP-NORC poll of 1,055 adults was conducted Jan. 28-Feb. 1 using a sample drawn from NORC’s probability-based AmeriSpeak Panel, which is designed to be representative of the U.S. population. The margin of sampling error for all respondents is plus or minus 3.8 percentage points.