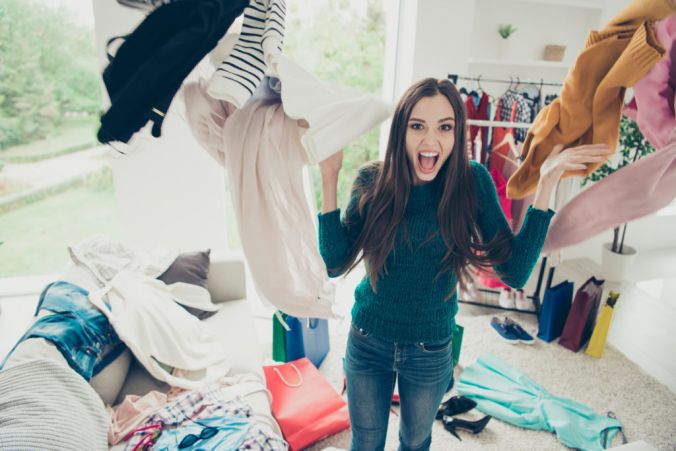 Is it time for a spring clean?

Decluttering is one of those tasks that even the most decisive householder puts off tackling. A nebulous, bitty endeavour, the main trouble is knowing where to start, but tactically discarding even small, apparently unimportant items can make a big difference to how a home feels.

Here are a few items you can get rid of right now, to help your home feel roomier, and get the decluttering ball rolling…

Yes, in theory you could read that interesting-looking article in the Economist about the state of southeast Asian geopolitics you put aside for a dull moment. You won’t though, will you? It’s been sitting behind the loo for five years.

Wire hangers just accrue, and we’re not even sure how. If you open your wardrobe to find that there are twice as many hangers as the clothes they’re hanging, then binning some can only make your life easier. It also means you don’t have to wake your whole house with aggressive jangling every time you get dressed.

People can be strangely sentimental about their shoes. By the time they’re unusably tattered, you’ve probably been through a lot together, but there’s not really any way to repurpose them. They will be discarded at some point – save yourself the bother and do it now.

There’s no commodity more fit for the charity shop than clothes that don’t fit you. You can’t reclaim a garment you’ve grown out of, however many memories it might contain, and a gift can be the wrong size regardless of who gave it to you. If you bought something erroneously, just cut your losses – don’t let it clog up your wardrobe in a stubborn refusal to admit your mistake.

Do not throw these away too quickly. Socks end up in different washes, and if you find sock two right after discarding sock one, the annoyance may be enough to stop you sleeping. There is, however, a limit, and once a sock has spent a few months in the odd pile, it’s stopped earning its keep.

OK, so this isn’t really decluttering, but we would bet our life savings you don’t change toothbrushes as often as you should. Dental and medical organisations almost universally urge switching it up every three to four months. If the bristles are frayed, swap sooner. And if you have ‘spare’ old ones, bin them while you’re at it.

Have you ever even been to the darkest recesses of your cupboards? A no man’s land filled with dusty bottles of unknown origin, and the canned food you’ll live on come the zombie apocalypse, long-lived kitchens invariably contain at least one item a good decade past its expiration date. You don’t see it, but it’s taking up space you might usefully repurpose.

It’s 2021. If you can digitise them, go for it; if not, one of your many streaming services will probably provide. Start with the movies you don’t like.

i found my old business cards from when i worked at twitter #opsec pic.twitter.com/XJUtxLeuhP

Clothes go in and out of fashion; old video games have replay value; and you might one day find a use for that spare bedside table. But you will never find yourself needing a business card for a position you no longer hold at a company you no longer work for.

In most modern houses, there somewhere sits a giant box of matted wires, which once charged this or connected that or claimed to give Bluetooth capabilities to the other. Electronics date quickly, and at least some of them will hail from the digital stone age, applicable only to ancient equipment that long since gave up the ghost.

We sincerely hope you’re not drawn to your medicine cabinet too often, but the situation-specific nature of medications means they can sit there on the top shelf for years, and years, and years. Do not buy into the myth that medicine expiration dates don’t matter. If it’s past its prime by any margin, remove and replace.

Yes, toys can work as hand-me-downs, but only some toys. The old hoop n’ stick struggles to find a place in today’s tech-savvy childhood, while completed or part-completed puzzle books are definitely single use. You wouldn’t give someone a sudoku book with half the sudokus filled in, and that should include your future children.

We don’t know how they do it, but dead batteries possess a near-unique ability to just turn up in random drawers. Purge them. Purge them all.

There are plenty of professionals out there who have carved careers out of re-heeling defunct timepieces. Either contact one, or don’t. There is no in between.

They’re all online. All of them.

The same goes for most catalogues, and a decent number of instruction manuals.

Binning the heartfelt wishes of friends and relations feels faintly cruel, but it’s better to briefly sting your sensitivities than scotch your storage long term. Birthdays and Christmases come around – spoiler alert – once a year, so it doesn’t take that long to amass enough cardboard to post and pack a small whale.

Decorations down! Why is throwing away Christmas cards so emotional? They seem to have gained immense sentimental value within 3 weeks!

An impulse buy from IKEA, a remnant of a long-lost relationship, a knick-knack that ‘came with the house’ – there is almost certainly some piece of plaster or ceramic sitting around somewhere that you secretly despise. When it comes to ornaments we agree with Marie Kondo – if it doesn’t spark joy, it goes.

Often accumulated over time, old towels tend to get faded, dog-eared, and just a little bit weird-smelling. If you wouldn’t be happy offering it to a guest, get rid of it or use it as a rag.

OK, before you yell at us, books take up a lot of space, and some houses are positively rammed with them. Some advise removing the ones you’ve already read, but you may want them for reference, rereading, or loaning to friends. We’re more interested in the ones which, if you’re honest with yourself, you haven’t read and never will.

Paints, glues, markers – once they dry out, they’re dead. We’re not saying you won’t use them – we’re saying you physically can’t.