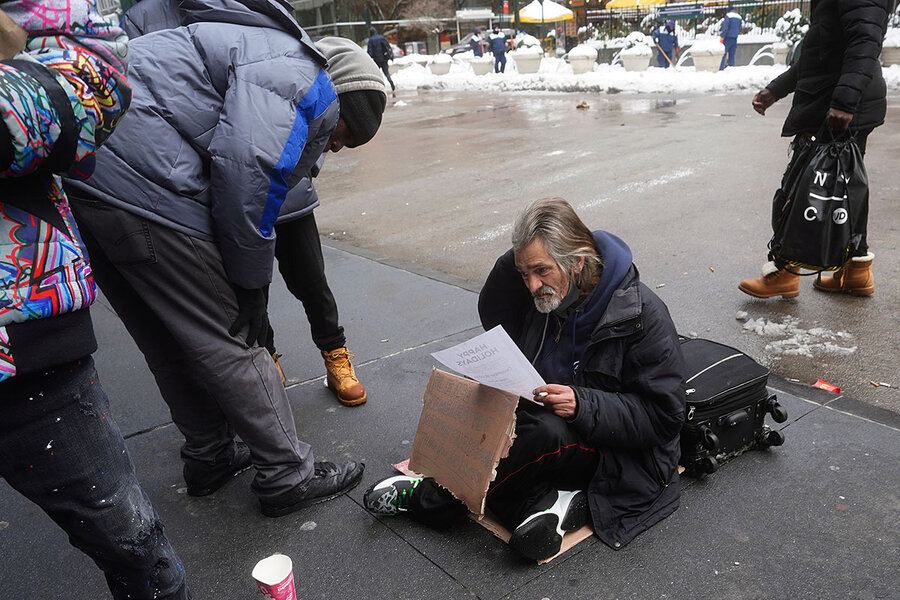 With vaccination campaigns rolling out in the United States and Canada, some cities have begun inoculating their homeless population – an effort clinicians warn will be challenging given the incomparable circumstances members of the community face.

For people facing homelessness, issues such as mobility, tendency to mistrust the vaccine, and a focus on more immediate needs like finding food and warmth all make it harder to secure protection against COVID-19, health experts say.

“The struggle [those facing homelessness] go through every day to survive, on the streets or in the shelters, has a real immediacy to it,” said Dr. Jim O’Connell, president of the Boston Health Care for the Homeless Program (BHCHP).

“As many people have told me, ‘a little virus’ doesn’t seem frightening to them because they face death every day and the virus is just one of the many things they face,” Dr. O’Connell told the Thomson Reuters Foundation.

The BHCHP, a nonprofit which provides medical services to the northeastern city’s homeless population, has vaccinated roughly 200 homeless people and 300 staff since the program started in late January.

The group is expected to administer about 3,500 doses of the Moderna vaccine in shelters across the city within the next month.

Similar rollouts are underway in other cities around the continent.

So far, New York City has vaccinated more than 500 homeless people and staff who serve them. Over 730 of Montreal’s homeless population have been vaccinated to date, according to official figures.

Since the pandemic started circling the globe last year, advocates and physicians have been urging lawmakers for greater protections for homeless populations.

Without regular access to healthcare, those facing homelessness are often much more susceptible to chronic medical conditions, which may predispose them to a more severe illness from COVID-19.

Sheltered people in New York City were 75% more likely to die from COVID-19 than the city’s general population, according to the Coalition for the Homeless, an advocacy group.

Pandemic shutdowns have also cut off access to public spaces, such as restaurants and libraries, where the unhoused often frequent to stay warm and wash their hands during the day.

Increasing capacity at overnight shelters has also become a problem, due to concerns over social distancing. People eat together, share bathrooms, and often sleep on beds within several feet of one another.

“On one hand, you have higher individual vulnerability because of health,” said Tim Richter, chief executive of the Canadian Alliance to End Homelessness.

In response, some cities throughout North America have moved people off of the streets or out of shelters into hotels to alleviate concerns over spreading the virus.

Under former U.S. President Donald Trump, cash-strapped cities were promised 75% of the money to pay for the hotels and were not given a timeline of when aid would run dry.

Last month, President Joe Biden vowed to reimburse cities for the full cost of the hotels and fully cover the costs through September.

In Canada, the federal government has made extra funding available for provinces and municipalities to prevent the spread of the virus among its homeless.

Ottawa announced in December it would spend an additional $300 million to help local communities.

So far, clinicians and advocates say they have been successfully able to find homeless people – a group that is largely distrustful of health care providers – who want the vaccine. However, they caution that things may soon change.

“The first 25% is always easy. We had no problem recruiting for the first number of clinics that we had to deal with,” said Sam Watts, chief executive of Montreal homeless charity Welcome Hall Mission.

“But, as we’re moving along, it’s harder and harder because there are some people who don’t want to get it for a variety of reasons,” he said in a phone interview.

Some are afraid of needles, others believe in a variety of conspiracy theories that question the safety of the vaccines, or have mental health issues, like paranoia, that impede them from complying with vaccine rollouts, explained Mr. Watts.

Marty Hames, the spokeswoman for Circle the City, a nonprofit that provides healthcare services to the homeless in Phoenix, Arizona, echoed similar concerns about vaccine compliance.

None of the groups the Thomson Reuters Foundation spoke with were making vaccinations mandatory for the homeless people they serve.

Other barriers include a lack of internet access to sign up for online vaccine portals, a lack of transportation to vaccination sites, and difficulties tracking down homeless people to give them the second dose of the vaccine, health experts say.

The consequences of not getting the vaccine rollout right can spread beyond homeless populations and to entire communities, warned Dr. O’Connell at the BHCHP.

At the start of the pandemic in late March, Mr. O’Connell and other Boston researchers found a 36% positivity rate among homeless people.

“Most people recognize that if homeless people have the virus, they’re walking all day and passing it [around],” he said.

“If you’re riding the subway and there’s a homeless person and they have a 30% chance of having the virus, you want to protect yourself as much as that person.”