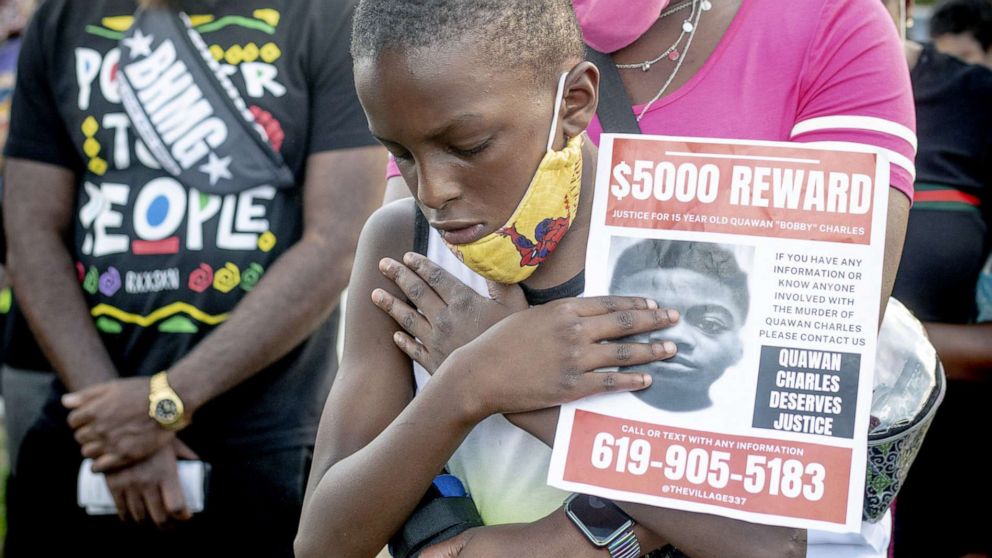 A woman has been arrested on charges related to the disappearence of 15-year-old Quawan “Bobby” Charles, whose naked and disfigured body was found in the drainage ditch of a Louisiana sugarcane field days after his mother reported him missing.

The arrest of Janet Irvin, 37, the mother of one of Charles’ teenage friends, is the first major development in the case that has garnered national attention. Charles’ family said they suspect foul play was involved in his death and believe he could have been found alive had police initially taken his disappearance seriously and immediately issued an Amber Alert.

Irvin was taken into custody on Tuesday morning in Lafayette Parish, Louisiana, after the Iberia Parish Sheriff’s Office obtained a court-ordered arrest warrant charging her with a felony of failing to report a missing child and contributing to the delinquency of a minor, according to a statement from Iberia Parish Sheriff Tommy Romero.

“This case continues to be an ongoing investigation and more arrests may follow,” Romero said in the statement. “I am confident that my office has put together an extremely strong case against Mrs. Irvin,” his statement continued.

Charles’ family and their attorneys had been urging police to arrest Irvin since December after they said a private investigator they hired recorded an interview with her and her son. In the interview, Irvin allegedly admitted to picking Charles up at his father’s home in Baldwin, Louisiana, on Oct. 30, the day he went missing, and driving him about 20 miles to their trailer house without first getting permission from Charles’ parents.

“I will say the family is relieved and happy. They know it’s not the end of the road. This actually is kind of the beginning of a new journey towards justice, but last night was celebratory and joyous,” Chase Trichell, an attorney representing Charles’ family, told ABC News on Wednesday. “They laughed and they cried. They had a meal together and it’s probably the best night they’ve had since Quawan went missing.”

He said that while the family is “cautiously optimistic” about the developments in the case, they still don’t have answers on why their child perished.

“We’re left with a lot of questions and not a lot of answers,” Trichell said.

Irvin and her son are believed to be the last people to see Charles alive.

A surveillance video released by Baldwin police shows Charles getting into a car with a woman believed to be Irvin and her son the day he disappeared, officials said.

“That video is super important for multiple reasons,” Trichell told ABC News. “One, it did prove that it wasn’t just hearsay that Janet Irvin was the last person seen with Quawan while he was alive. It corroborated that.”

Irvin claimed in the recorded interview with the private investigator that she did not report that Charles ran away from her home that night, according to the audio recording released by the Charles’ family’s attorneys. Charles’ body was found a little over a mile from Irvin’s residence.

“Yes, I should have called the cops. I should have went further,” Irvin allegedly said in the recording made public by Charles’ family.

Irvin’s 17-year-old son, whose name has not been released, allegedly told the private investigator in the recording that he and Charles smoked marijuana at Irvin’s home.

Autopsy results released this week by the Iberia Parish Coroner’s Office ruled the likely cause of Charles’ death was drowning in the drainage ditch that contained about two feet of water. A toxicology report also showed that Charles had low levels of THC and alcohol in his system when he died, according to the coroner.

Charles’ family commissioned an independent autopsy that also found the likely cause of death was drowning, but that the manner of death was undetermined, according to the autopsy reported released by the Charles’ family’s attorneys.

“We produced evidence to the authorities through our own investigation. Much of that evidence hasn’t changed, and we’re presuming they made the arrest based on that exact same set of evidence,” Trichell said.

Still, he said it took law enforcement 104 days since Charles was reported missing to make an arrest.

“The thing in these criminal investigations, you want to move fast so you don’t lose evidence. We hope at this point that nothing has been permanently lost because they waited over three months to make an arrest,” Trichell said.

Baldwin police did not notify state police to issue an Amber Alert, nor did they report Charles’ disappearance to local media. Charles was entered into the National Crime Information Center as a missing person or runaway, according to the Baldwin police report.

“We didn’t see where it felt it met the criteria of an abduction or kidnapping,” Wise told the station. “Because there were no eyewitnesses or no one to say that he had jumped in the vehicle or even beat him and took him into that vehicle. So it didn’t meet the criteria to get in touch with state police.”

Sheriff Romero said on Tuesday that his office was not notified of Charles’ disappearance until the afternoon of Nov. 3.

“At that time, (Iberia Parish Sheriff’s) deputies requested the wireless provider ‘ping’ Quawan’s cell phone. On November 3, 2020, at 6:43 pm, the body of Quawan Charles was located in a drainage ditch along the headland, in a sugarcane field,” Romero said in his statement.

Following her arrest, Irvin was transferred to the Iberia Parish Sheriff’s office, where she was being held Wednesday pending a bond hearing.

It was not immediately clear if Irvin has hired an attorney.

Trichell said Charles’ parents spoke with Romero following Irvin’s arrest and that the sheriff told them they have a strong case against Irvin.

“I think it’s the first time we’ve felt like we’re on the same page with the authorities. It’s felt like we’ve been at odds with them this whole time,” Trichell said. “We’ve had trouble getting meetings. They didn’t want to exchange evidence with us and just recently that’s sort of changed. So, it’s kind of nice to feel like we’re an ally with them versus an adversary.”