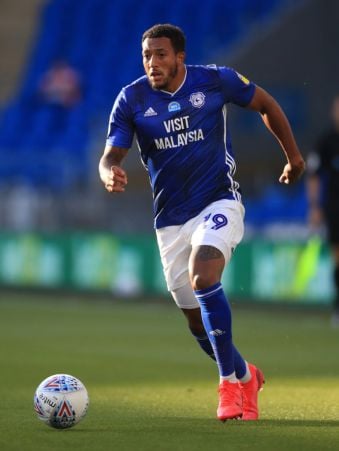 The FA has revealed Mendez-Laing served the ban after a positive drugs test administered on July 4, 2020, saying he admitted taking cocaine “in a context unrelated to sporting performance”.

Mendez-Laing was playing for Cardiff at the time and had his contract terminated last September for what the Sky Bet Championship club termed an “alleged breach of contract”.

The @FA has today published details in relation to a breach of its Anti-Doping Regulations by Nathaniel Mendez-Laing.

The 28-year-old joined Middlesbrough earlier this month and was reunited with manager Neil Warnock after the pair won promotion to the Premier League with Cardiff in the 2017-18 season.

An FA statement read: “The Middlesbrough FC player provided an in-competition urine sample to the FA via UK Anti-Doping officials on 4 July 2020 while playing for Cardiff City FC and it was found to contain metabolites of cocaine once subsequently analysed.

“Cocaine is classified as a prohibited substance in-competition by the World Anti-Doping Agency (WADA), therefore Nathaniel Mendez-Laing was charged by the FA for a breach of its Anti-Doping regulations and provisionally suspended on 14 August 2020.

“Nathaniel Mendez-Laing admitted the charge but was able to explain that the substance had been ingested out-of-competition in a context that was unrelated to sporting performance.

“An independent Regulatory Commission was subsequently convened to decide an appropriate sanction and, in line with the revised 2021 WADA Code that permits reduced sanctions for ‘Substances of Abuse’, applied a back-dated three-month suspension from 14 August 2020.”

Mendez-Laing, who has yet to play for Middlesbrough, joined Cardiff from Rochdale in 2017 and made 92 appearances for the Bluebirds, scoring 14 goals.

He had previously played for Wolves and Peterborough and had loan spells at Sheffield United, Portsmouth, Shrewsbury and Cambridge.

In a statement released to the BBC, Mendez-Laing said: “With the help of my family, close friends, my agent, and the PFA (Professional Footballers’ Association) during this extremely difficult time, I have been able to overcome my personal hurdles, to focus, and invest my time in working hard, determined to return to football.

“I appreciate all the support I have been given throughout. I now want to leave that period of my life in the past where it belongs.

“I’m excited about the future and delighted to be back doing what I love.”