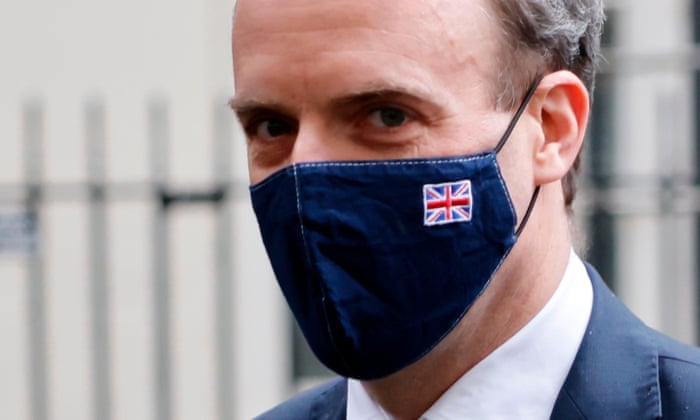 Dominic Raab has hit back at what he called “arbitrary” targets demanded by some Conservative MPs to lift coronavirus restrictions in England, urging caution even as he said the government was on track to meet its target to vaccinate the most vulnerable people.

Ministers have set a date of Monday by which a first coronavirus vaccination should have been offered to the top four priority groups, going down to all those aged 70 or over, taking in around 15 million people.

It is anticipated a formal announcement could be made later on Sunday, with Raab saying he was “confident we’re on track” to meet the target.

“The numbers look good, but I want to wait until we’ve got the formally published figures so that we’re doing it accurately and in the right way,” the foreign secretary told Sky’s Sophy Ridge on Sunday show.

But Raab was notably cautious on making any promises on reopening, and pushed back against demands from a group of Tory backbenchers for the government to commit to ending all restrictions in England by May.

In a letter to Boris Johnson, the Covid Recovery Group, writing on behalf about 60 Tory MPs, said that by the end of April, the target date for offering first vaccinations to the top nine groups, going down as far as people aged 50-plus, there would be “no justification” for restrictions to remain.

Raab dismissed this, saying: “We’re not making what feels to me a slightly arbitrary commitment without reviewing the impact the measures have had on the transmission, and the hospital admissions.”

He was also cautious about the idea, outlined in some reports on Sunday, that a first step could be to allow people to sit and socialise with one other person in a park from 8 March, the date by which English schools will start to fully reopen.

”They are not small things, we understand that,” Raab said. “But we do need to be very careful in how we proceed. We’ve made good progress, we don’t want to see that unravel because we go too far, too quick.”

The prime minister would make a first announcement on schools and other early measures on 22 February, after a review of data, Raab said.

He said: “On 8 March we are aiming, we are hoping, to get schools back. The precise details we need to set out once we have evaluated all of that evidence. The prime minister will give more of a steer on the 22nd. But the aim is to get schools reopening in a responsible way on the 8th.”

But even with schools in England, Raab said he could not confirm that all schools would reopen fully from 8 March. He said: “We need to wait, to evaluate the data carefully, and allow those plans to be put in place.”

He added: “We will be evidence-led, but we share the ambition to get out of lockdown, to transition to a better place.”

On Monday, the government’s plan for mandatory, hotel-based quarantine for all arrivals to the UK from a “red list” of 33 countries where new and potentially vaccine-resistant variants of coronavirus have been detected comes into force, despite concerns about preparations.

Raab rejected the idea that ministers should have adopted a broader approach to the restrictions.

“I’m not sure that’s proportionate, and of course having blanket bans on any, for example, air travel into the UK would be very difficult for the supply chains, things like freight,” he said.

“We think we’ve got the right balance – robust measures, but targeted measures.”