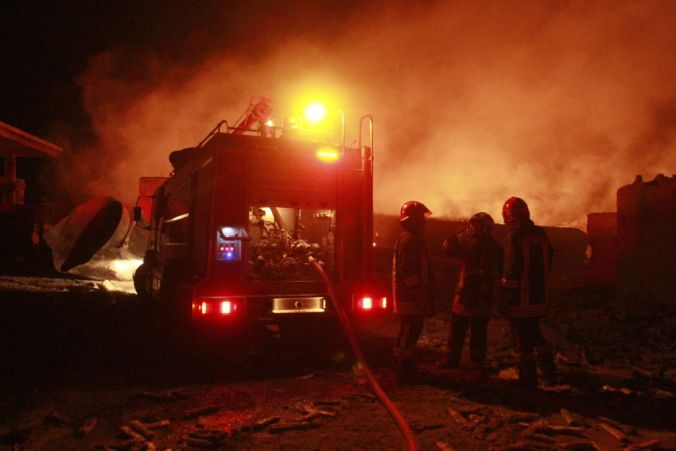 Firefighters have struggled for a second day to battle a massive blaze that began when a fuel tanker exploded at a major crossing in Afghanistan’s western Herat province on the Iranian border.

At least 20 people were injured and many of the more than 500 lorries lined up at the Islam Qala crossing carrying natural gas and fuel were still ablaze, according to Afghan officials and Iranian state media.

“When each cylinder was exploding it was flying hundreds of metres high,” he said.

Two explosions at the border crossing were powerful enough to be spotted from space by Nasa satellites. One blast erupted at around 1.10pm Afghan time, the next around a half and hour later.

The United States allows Afghanistan to import fuel and oil from Iran as part of a special concession that exempts Kabul from US sanctions against Iran. Satellite photos taken Saturday before the explosion showed dozens of tankers parked at the border crossing.

Mr Qatali said officials were concerned that windy conditions on Sunday could fan the flames and spread the fire to even more fuel-laden trucks in the area. He said the government was able to save more than 1,200 trucks.

Herat’s chamber of commerce and industries chief Younus Qazizada said the explosion and fire started when provincial customs employees were inspecting a gas tanker. But an investigation into the cause of the fire is continuing.

Iran has sent 15 firefighting units to the Afghanistan side to help deal with the blaze.

The Islam Qala border crossing is around 75 miles west of the city of Herat and is a major transit route between Afghanistan and Iran.

The Afghan government is working on an alternative to resume trade between the two countries, as Afghanistan is mostly dependent on imported goods from neighbouring nations.