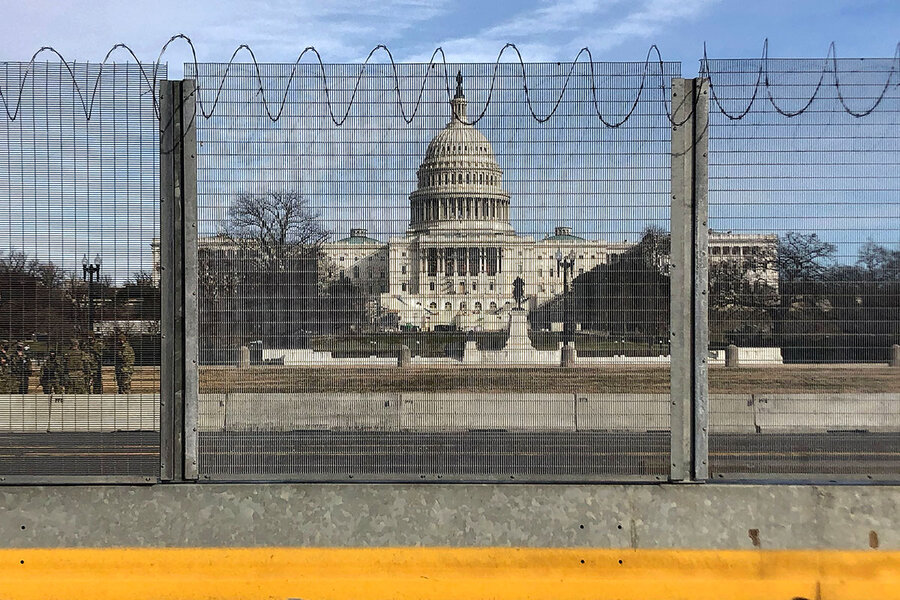 In front of the U.S. Capitol this past Saturday, a young mother with a baby strapped to her chest asked a stranger to take her family’s photo. As the father tried to wrangle their little girl, wholly focused on her dripping ice cream cone, they stood smiling before the Capitol dome. It was the classic snapshot – the kind destined to be stuck on a refrigerator with a magnet or taped in a scrapbook.

But that marble citadel backdrop was a quarter-mile away, behind the surreal photobomb of a dozen camouflaged men with black assault rifles patrolling a 7-foot-high barbed wire fence.

The Capitol is off-limits to the average citizen.

“An open Capitol is an essential part of who we are,” says Chuck Hagel, a former secretary of defense and two-term Republican senator from Nebraska. Historically, the halls are scenes of action, as lines of young schoolchildren on field trips pass overworked staffers, and legislators bolt to elevators to dodge reporters and their recorders – a flurry of “good madness,” as Mr. Hagel likes to call it.

Since its construction, the Capitol has been the personification of democracy: a place for legislative business as well as a symbol of lawmakers’ accountability to their constituents.

But modern fears have eroded the free flow of the democratic space – beginning after 9/11 with Capitol visits confined to designated guided tours, and particularly in the past year of pandemic restrictions and civil unrest.

When the U.S. Capitol and the six surrounding congressional office buildings closed to the public last March due to the COVID-19 pandemic, visitors still toured the outdoor space. Then on Jan. 7, the day after supporters of then-President Donald Trump invaded the Capitol to challenge the congressional certification of Joe Biden’s election victory, fencing started to go up around the complex.

“This is the obvious, easy, and wrong answer to the security problem,” says Jane Campbell, president of the U.S. Capitol Historical Society. “We have to secure not just the building and the people who work in it, but we have to secure our democracy.”

Historians and lawmakers from both parties worry that the past year’s isolating security measures may be the new status quo – an indefinite militarization. When the fences were erected, the secretary of the Army said they would remain for 30 days, but that deadline came and went this week.

As of Tuesday, 3 miles of 7-foot-high fencing blocked off the Capitol – a protection the acting Capitol Police chief says she hopes to make permanent. For approximately half a billion dollars, 5,000 National Guard troops have been ordered to stay through the end of March to protect against potential unrest over the impeachment trial, according to a memo obtained by Politico, although legislators don’t expect the trial to last more than this week.

“I don’t think the original architects could have conceived in their minds what we are looking at right now,” says Bill Allen, the former architectural historian for the Capitol. The only other time the buildings on Capitol Hill were enclosed by fencing, says the author of “History of the United States Capitol: A Chronicle of Design, Construction, and Politics,” was in the late 1800s to keep Washington’s roaming farm animals at bay.

Ms. Campbell points out that ultimately, a permanent fence will be up to Congress: The Capitol Police Board could approve the measure, but it would need to be funded by the House Appropriations Committee. And despite past violence, Congress has stayed committed to the democratic principle of a Capitol freely accessible to citizens. In 1954, after four Puerto Rican nationalists fired shots from the House gallery, there was a debate over installing bulletproof glass between the gallery and the House floor. And in 1998, after a man shot two Capitol Police officers at a security checkpoint, there was discussion about limiting those permitted access to the Capitol. Both of these suggestions were eventually rejected.

But a long-awaited congressional visitors center to streamline visitation through tours, for example, finally received congressional funding after the two officers were killed in 1998. And after the terrorist attacks of Sept. 11, 2001, the center was redesigned to be larger and more expansive.

Before 2020, the public could enter the Capitol after going through security and registering for a tour with the visitor center – which more than 24 million people have done in the past decade. But the six congressional office buildings have never required tours or security clearance: Before the pandemic, walk-ins were welcome during business hours, and constituents could knock on senators’ doors without appointments, says Ms. Campbell, who also served as a senior aide to two senators.

Mr. Hagel remembers meeting in his office with representatives from the Nebraska farmers union, who were embittered by the slow wheels of Congress. Mr. Hagel, realizing he had an hour to spare before his next meeting, toured the representatives around the Capitol, showing them the Senate floor, committee meeting rooms, marble staircases, portraits of former leaders, and what he calls the “magic” of the Rotunda.

“When we headed back to the Russell building, they were all very quiet and the union president said, ‘Senator, I’m speechless. I never thought I could see all that,’” recalls Mr. Hagel. “We don’t want that [kind of restrictive] thinking to prevail in our country. We want everybody to know you have a right to walk in that Capitol.”

This right was on the minds of early designers, says Mr. Allen, as evident in landscape architect Frederick Law Olmsted’s parklike grounds, as well as the prominently placed and welcoming entrances and wide, crowd-accommodating hallways.

“The people’s access to their Capitol is the physical manifestation of democracy,” said former Sen. Trent Lott, a Republican, on the Senate floor after the 1998 shooting. “It represents something rare and precious, something all Americans take for granted. It represents the bond between those in high office and those who put them there. It represents, in short, our freedom.”