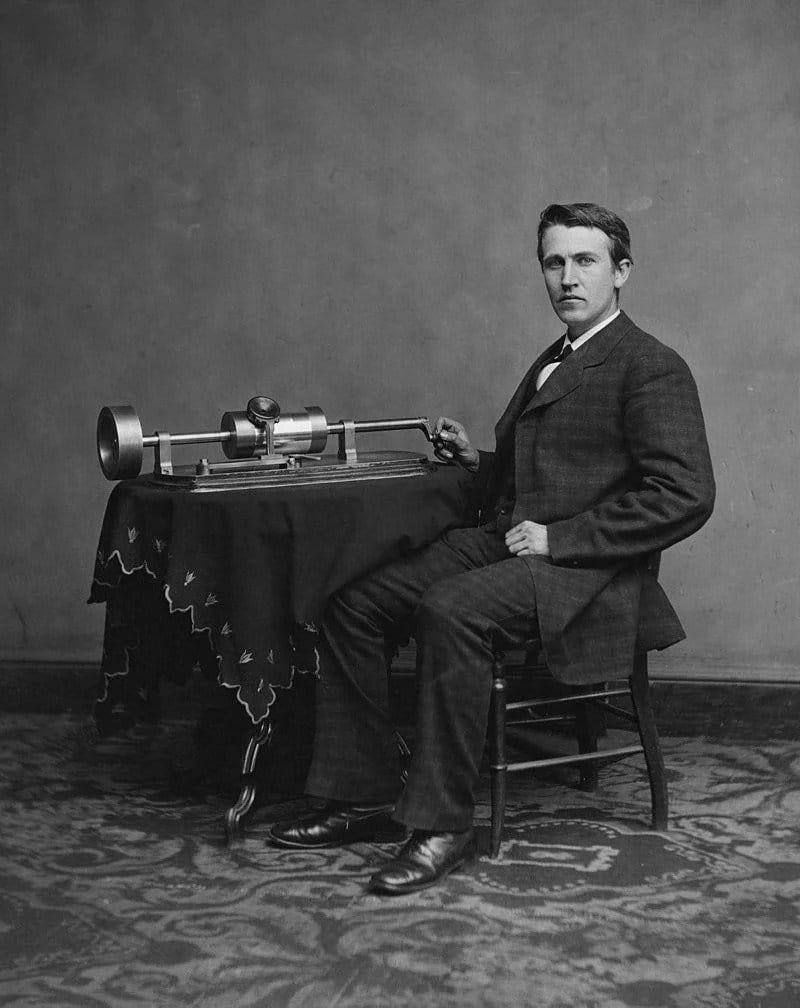 In this article, we'll look at how you can make your own phonograph. For those who do not know what this is a small excursion into history.
The phonograph is the prototype of the gramophone and gramophone. The phonograph (from the Greek φωνή “sound” + γράφω “to write”) is the first device for recording and reproducing sound. Invented by Thomas Edison, introduced on November 21, 1877.
The first phonograph recorded sound on tin foil, which was later replaced by a wax cylinder.
By means of a spring mechanism, the phonographic roller was set in rotational motion and simultaneously moved along its axis. When recording, sound vibrations affecting the membrane were transmitted to the needle, which, in accordance with these vibrations, traced a helical groove of variable depth on the surface of the foil.
Some fun facts.
Edison himself was so overwhelmed by the discovery that he said: “I have never been so overwhelmed in my life. I was always afraid of things that work the first time. ”For the first time, Edison's assistant, French physicist Theodore du Monsel, demonstrated the work of a phonograph. The demonstration was attended by professor-philologist Buyo. When the voice from the device rang out Buyot jumped from his chair, ran up to Monsel, grabbed him by the collar and in a rage began to strangle him, repeating: “Scoundrel! Dodger! Do you think that we will let the ventriloquist trick us ?! ”
Buyo was convinced that this was a deception and spoke like this: “Is it possible to assume that the despicable metal is able to reproduce the noble voice of a man!”
Another funny incident happened in the Russian Empire. According to some sources, when the phonograph was first shown publicly in Russia, its owner was brought to trial and sentenced to three months in prison and a fine for fraud.
Those wishing to learn more about Edison's invention and some other inventions preceding the era of technological progress, I advise you to read a book from the ZhZL series, Mikhail Yakovlevich Lapirov-Skoblo “Edison”.
Specifically, the master made this device to demonstrate his work to his grandchildren. br> So, for the manufacture of a phonograph you need the following
Tools and materials:
-Plastic bottle;
-Plastic can;
-Lumber;
-Foil;
-Needle;
-Marker;
-Chimmer;
– Drill ;
– Threaded stud;
– Nuts and washers;
– Glue gun;
– Loop for the lock;
– Self-tapping screws;
Step one: bed
The bed of the device is made of sawn timber. The design is not complicated. Two posts are attached to the massive base. In the racks, you need to make coaxial holes for the axis.
The device must be stable and massive. It should not move during recording/playback, because it will create additional noise during recording. 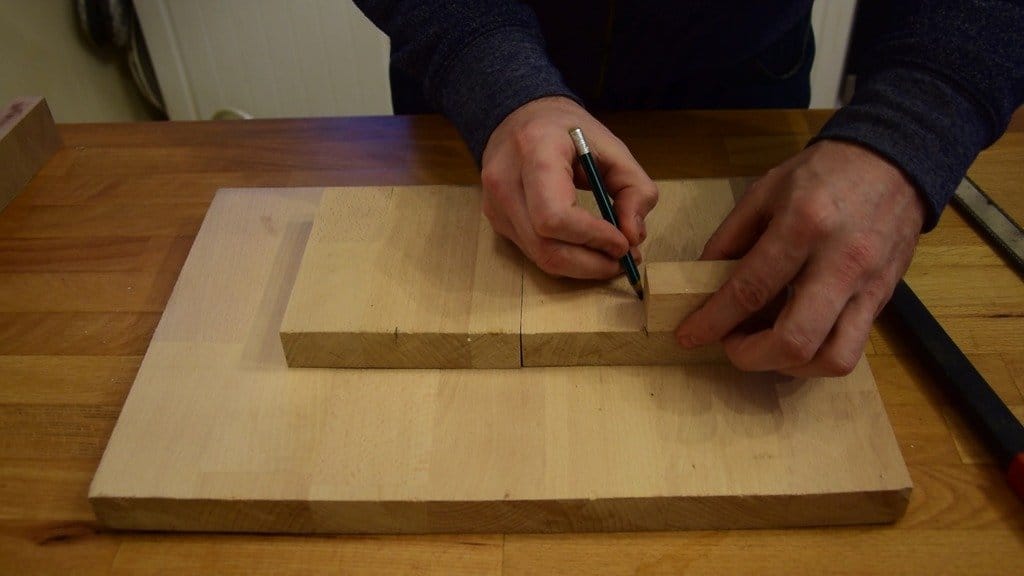 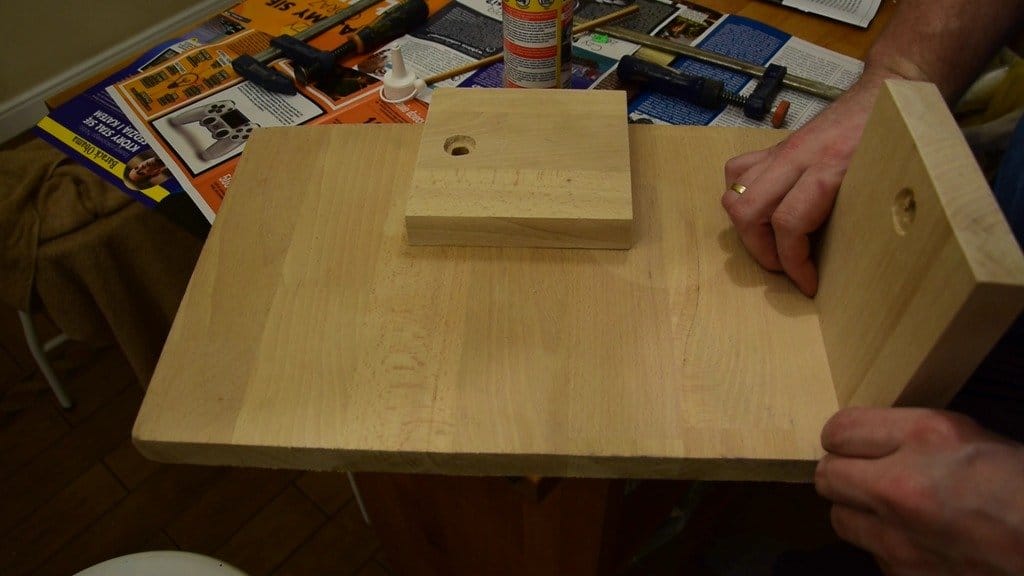 Step two: axis and cylinder
The sound will be recorded on the foil, but the foil must be fixed to the cylinder. The master made the cylinder from a plastic can. I drilled the bottom and top of the can, and put it on the axle. Then the whole structure was placed on the device, passing the axle through the holes of the posts. To reduce the noise from the axle, he lubricated it with oil. In order to turn the axis and, accordingly, the cylinder, I made a handle on one side of the axis. 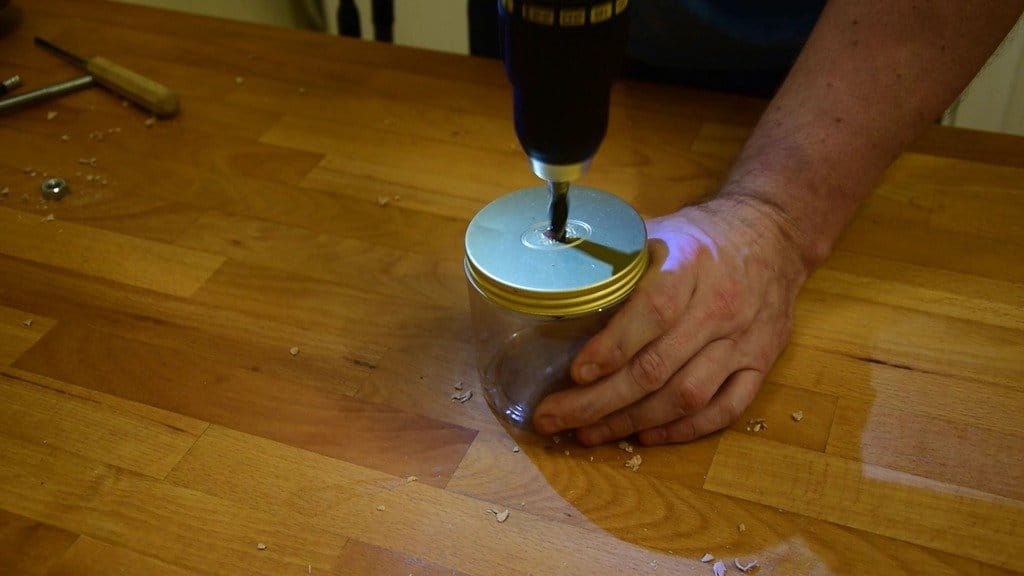 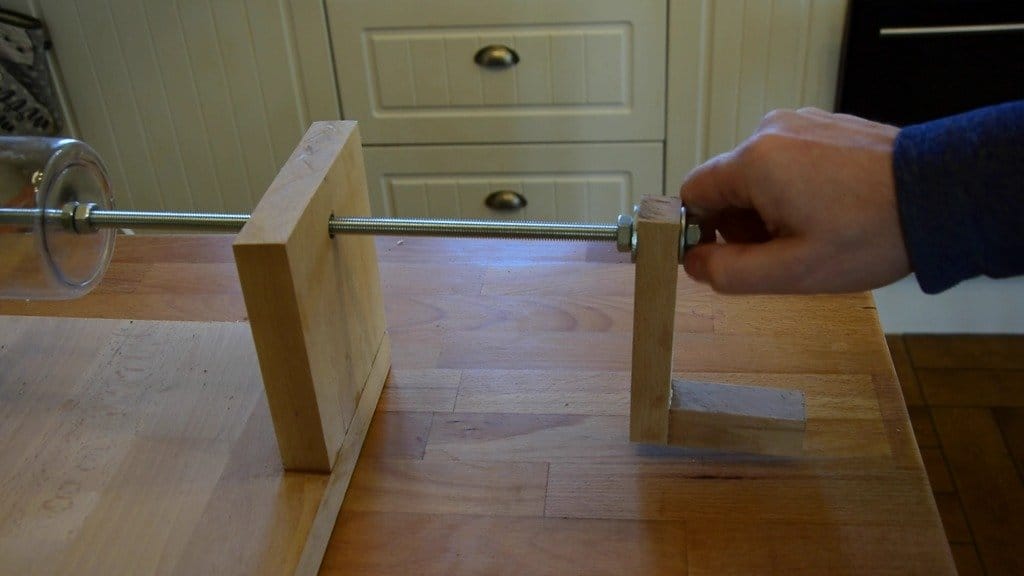 Step Three: Needle
The most important part is the needle and resonance tube. To make it, you need a metal can lid (it must be strong enough, but “elastic”), a plastic bottle, a piece in the form of a cup without a bottom, and a pushpin. The master used a glue gun to connect all these parts.
Glue the lid to the “cup”, then glue the bottle. The pin should be very sharp, so it is best to sharpen it. It is glued to the center of the metal cover. You can also use a plastic plate as a resonator. 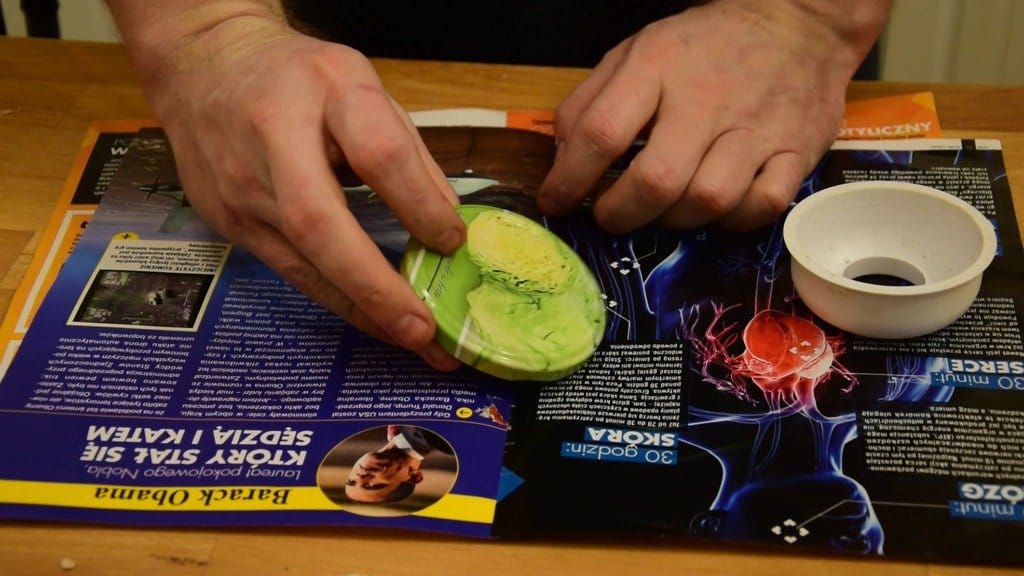 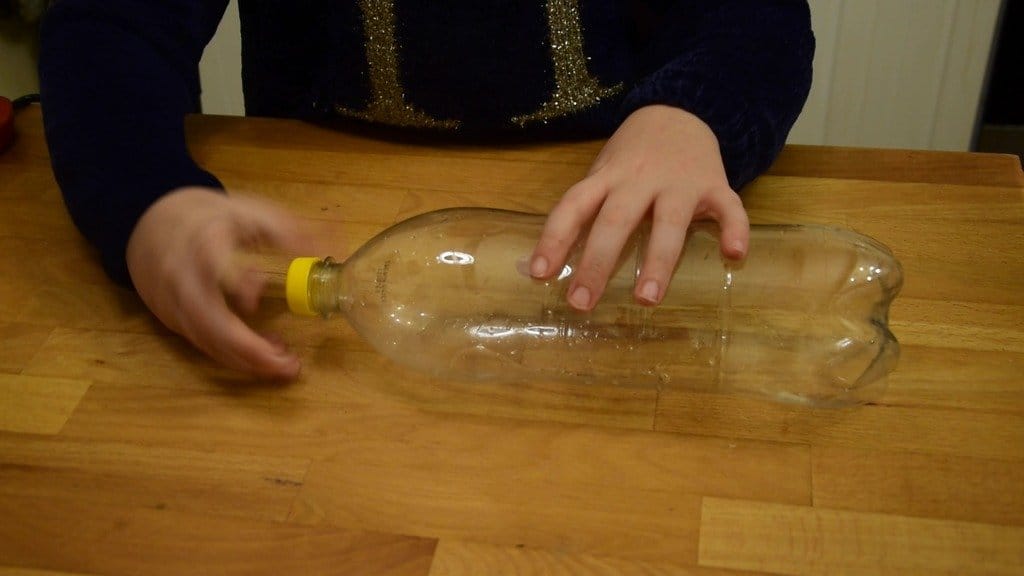 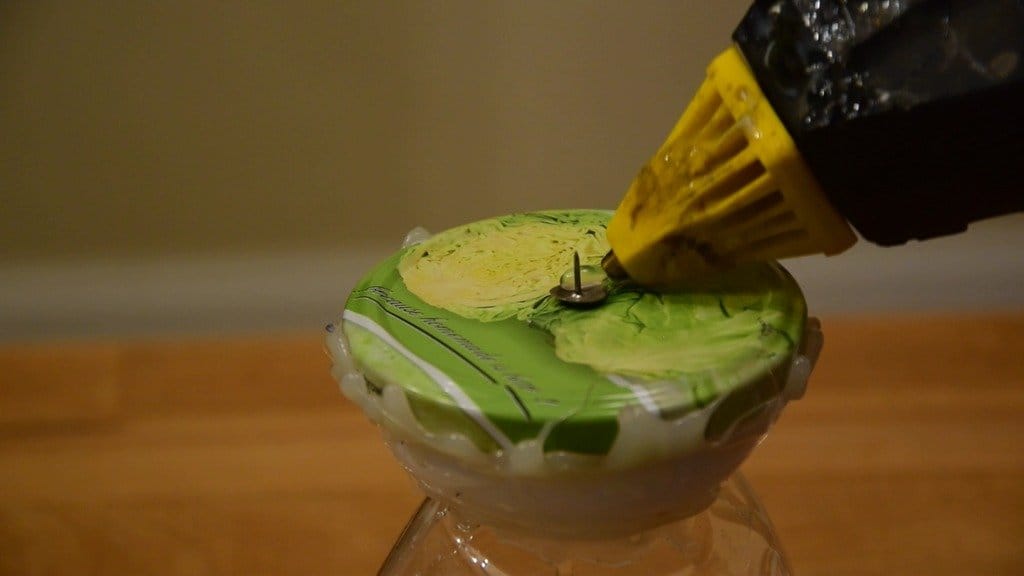 Step four: assembly
The needle should rest on the roller under the weight of the resonator. To fasten the resonator, the master uses a hardware loop. One part of it is attached to the base, the other to the metal resonator cover. It is necessary to choose such a loop so that it has as little left/right play as possible.
Installation of this node is a rather laborious process. It is necessary to ensure that the needle does not tear the foil, namely, it scratches the grooves. It depends on the sharpness of the needle and on the weight of the structure and on the correct winding of the foil. 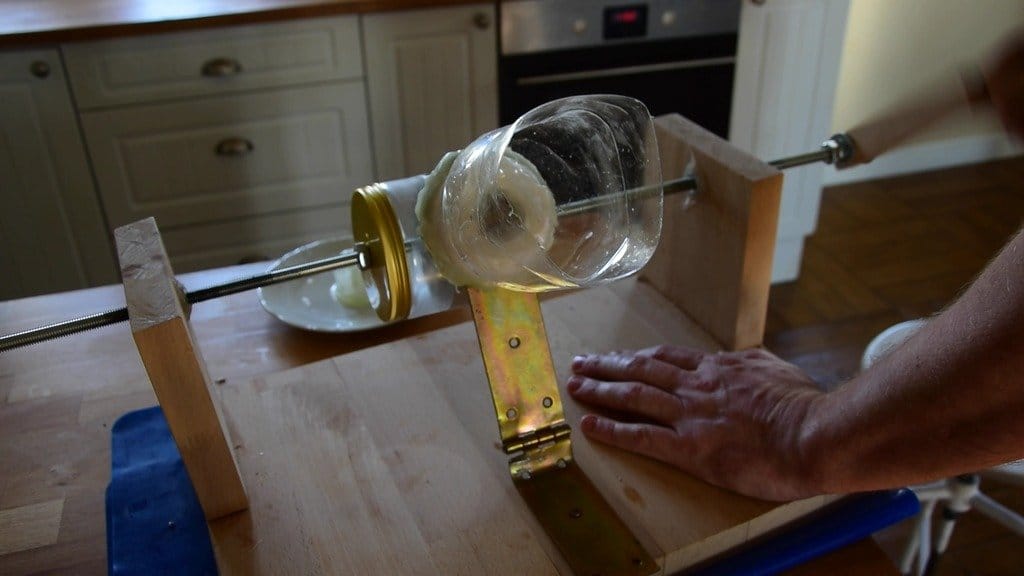 Step Five: Foil
After several unsuccessful experiments, the craftsman finally found a solution that does not break the foil.
1. Foil for kitchen
It is very thin so you need to fold it several times. Then, after gluing the foil to the cylinder, it needs to be coated with some kind of lubricant to reduce friction (cooking oil is enough). Unfortunately, even with lubrication it can tear, so he recommends reducing the pressure of the needle on the material. How to do it? You can use a spring or use less heavy objects for the resonator assembly, such as a plastic cup and a plastic plate.
2. Thicker foil
This kind of foil works better, but you still need to oil the surface. 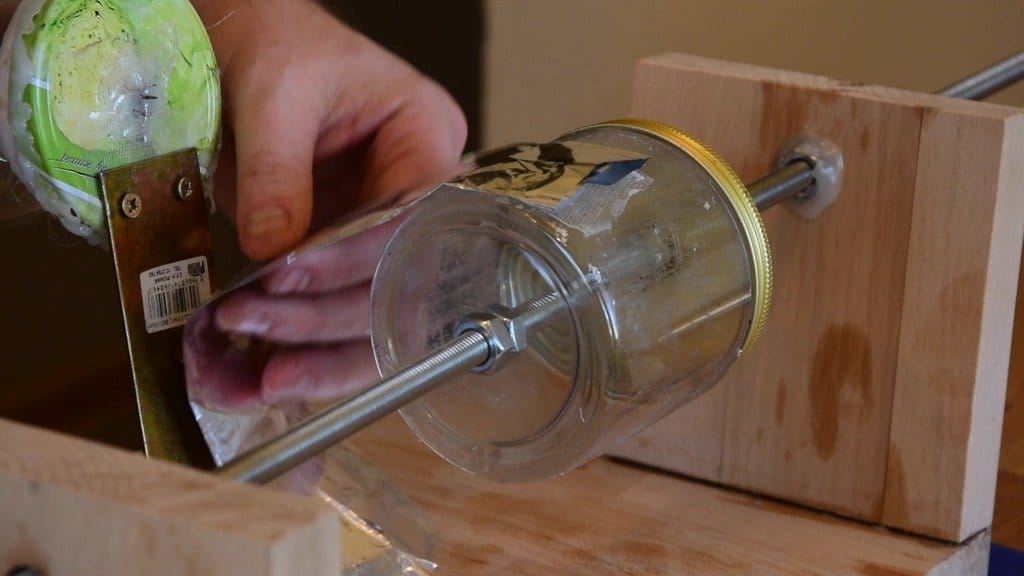 Step six: recording and playback
To record sound on foil, you need speak quite loudly into the bell and at the same time, at the same speed, scroll the cylinder.
To play sound, you just need to turn the axis handle and scroll the cylinder accordingly.
For more details on the process of making a phonograph, as well as a demonstration of its work, you can watch the video.

Double bed made of a profile pipe and chipboard