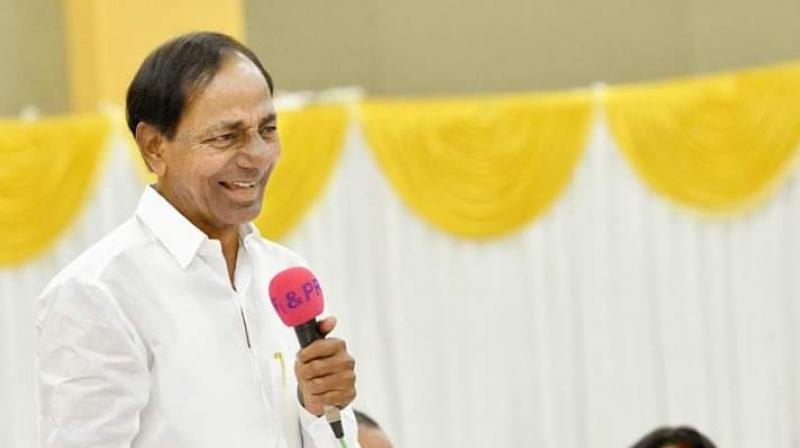 Hyderabad: Set to celebrate 20 years of its formation soon, the Telangana Rashtra Samiti (TRS) is set to cross the eight million (80 lakh) members mark, including the nearly 20 lakh new members who are expected to join during the ongoing membership drive. It is now aiming higher at a total of one crore members with a target of another 20 lakh, making it one of the largest regional parties in the country.

The party has been further enthused by the decision of TRS supremo and Chief Minister K. Chandrashekar Rao to visit all districts of the state and to further streamline and strengthen the organisation.

The TRS cadre, who are preparing to celebrate the two decades of the party’s existence, are going full throttle to reach out to people by organising multiple programmes and further strengthening the party organisation.

The party launched a massive membership drive on Friday, which would conclude by the end of February. Soon, the TRS would constitute committees from the village to the district level. The celebrations would reach their crescendo with a mammoth public meeting on April 27, the party’s foundation day.

“The ballpark estimate, based on the existing number of members in the party of 60 lakh, is likely to shoot up to 80 lakh by the end of this month. We are going for the target of one crore. It indicates one in five citizens of Telangana is a member of the TRS and we will increase it to one in four,” said a party insider.

In the wake of the party supremo’s reflection that is seldom easy for any regional party to survive for 20 years, party leaders are asserting that the TRS, which made a humble beginning in the face of almost everyone writing it off, today stands tall amid many national players.

“When the gulabi flag was taken into villages after the party was founded, people used to wonder what it was. But, he had the guts to challenge that if he could not achieve a separate Telangana, he could be lynched with stones,” said his son and party working president K.T. Rama Rao, in an emotionally choked voice at a public meeting in Sircilla on Friday.

When Chandrashekar Rao launched a political party with the single-point agenda of having a separate Telangana, he was brushed aside by several leaders in Telangana and beyond as an “also-ran”, citing the example of Dr Marri Channa Reddy, arguing that when a stellar leader like him, with sufficient political clout, couldn’t realise this dream, how would the TRS succeed, Rama Rao recalled.

Chandrashekar Rao, who had neither political lineage nor money to run a political party for long and was backed by no media, had grit and perseverance, he said.

“Much to the chagrin of many powerful leaders, KCR disproved critics and defied odds, and convinced all political stakeholders across India that the demand for a separate Telangana was fair and reasonable. He had to join hands and part ways with different political parties in his arduous journey that resulted in the formation of a separate Telangana,” recalled B. Vinod Kumar, vice-chairman, State Planning Board.

Rama Rao, while launching the membership drive at Sircilla, recalled, “the late Union minister Arun Jaitley once said that launching and sustaining a protest demanding a separate state could be easy. But, transforming a party that spearheaded the movement into a ruling party and winning popular mandate was a remarkable achievement.”

“Bees saal baad (after 20 years), the TRS is a triumphant political organisation that created a government passionately committed to transforming the state into one of the best performers in India. Since it took over the reins, the KCR government has successfully balanced development and welfare schemes,” said Peddi Sudershan, MLA.

“People are comparing the situation before and after the formation of Telangana. There is a marked change in the administration and schemes are actually reaching the needy,” said Dasyam Vinay Bhaskar, MLA.

The party, which secured a popular mandate for a second consecutive term, despite the setback of losing seats in the Lok Sabha elections, bagged all zilla parishads, almost all municipalities and other local bodies, in the elections held soon after.“TRS is very strong at the grassroots level,” Rama Rao said. He emphasised that though the support base of the party remained undisturbed, no party can win a 100 per cent mandate.

Though the TRS morale took a hit when it lost a byelection to the Dubbak Assembly seat with a slender margin and its majority thinned down in the GHMC elections, a day after having its Mayor and Deputy Mayor, the party is looking ahead to grow from strength to strength.

Against this background, TRS supremo Chandrashekar Rao has decided to invigorate the party by accelerating its activities, including the membership drive and creating new committees. He started the campaign for upcoming byelection to Nagarjunasagar by addressing a large public meeting at Halia.

The party is now working on a road map for the proposed tour of Chief Minister Rao to all districts.

Rama Rao, in Sircilla, set the tone for party leaders and cadre, when he said, “While the Central government is heaping encomiums on the achievements of Telangana, including schemes like Mission Bhagiratha, state-level BJP leaders are resorting to mudslinging.”

“Please do not test our patience. We are being dignified. If we lose our cool, we won’t spare any of your leaders, including Prime Minister Modi,” Rama Rao said.

The coming two months would see hectic activity in the TRS to further propel morale to take on the Opposition and Chandrashekar Rao’s state-wide yatra will demonstrate the power of his people-connect.