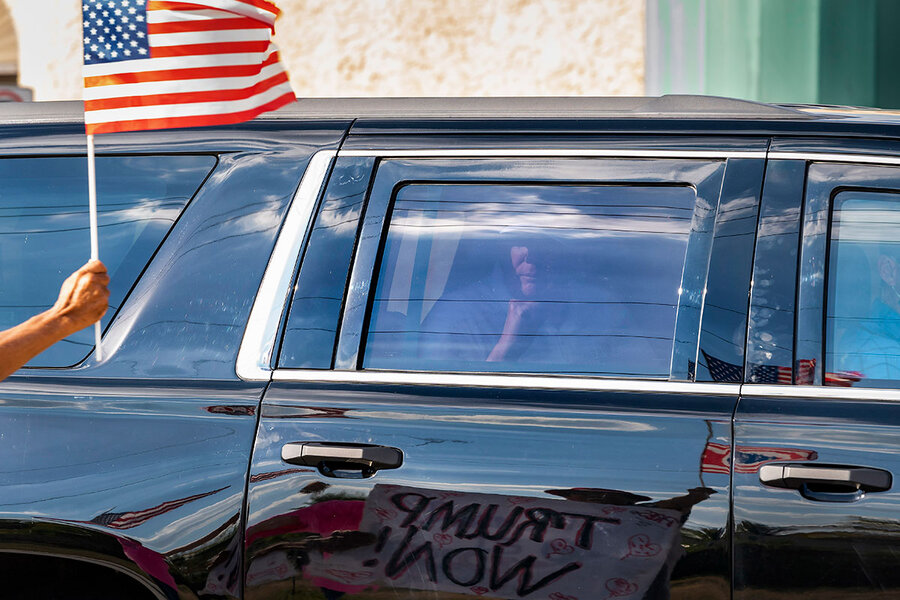 The contrast could not be more stark.

Mr. Trump’s permanent banishment from Twitter on Jan. 8, two days after the Capitol riot he is blamed by Democrats and some Republicans for inciting, has certainly crimped his style. He’s at his Mar-a-Lago estate in Florida, living in deplatformed exile. Old-fashioned press releases from The Office of Donald J. Trump land in reporters’ inboxes. But the ex-president has made no TV or radio appearances since leaving office.

“His instinct is telling him to be quiet,” says Ford O’Connell, a Florida-based Republican strategist.

For Mr. Trump, this is an unusual posture, given that much of his professional life has centered on performance – first as a celebrity real estate developer, then a reality TV actor, and culminating in an improbable rise to the presidency.

This pause in Mr. Trump’s relentless public presence could be serving him well. His poll numbers have rebounded a bit since plunging after the Jan. 6 sacking of the Capitol by his supporters. But even if Mr. Trump recaptures some of the support he lost, it’s a new day for his persona.

In some ways, the former president is two entities – a man and an idea. Mr. Trump the man has a solid base of diehard supporters, giving him the potential to stage a political comeback and become the first U.S. president to win a nonconsecutive second term since Grover Cleveland in 1892. Mr. Trump the idea represents a breed of political thought – “conservative populism” – that could be the key to success for other Republican politicians going forward.

“The Trump coalition is a conservative-populist alliance where both halves need the other in order to thrive,” says Henry Olsen, a senior fellow at the Ethics and Public Policy Center in Washington.

Can coalition hold together?

In policy terms, this alliance stands for some elements of old-style Republicanism – lower taxes, less regulation, cultural conservatism – along with an “America first” approach to immigration, trade, and foreign policy.

To regain the presidency, Mr. Olsen says, Republicans need to add to this coalition without alienating either of its key components. That means, for example, sticking with Mr. Trump’s restrictive positions on immigration and international trade.

“Many Republicans come from the conservative side of the alliance, so they’re used to talking about small government, religious liberty, and strong defense,” says Mr. Olsen. At the same time, “there are many people in the alliance who are concerned about America’s future, who are American patriots rather than conservatives, who want to see trade handled in a way that helps American jobs rather than American capital.”

In a poll last month of 1,000 Trump voters in 2020 conducted by YouGov and directed by Mr. Olsen, the outlines of the Trump electorate show a potential path forward for the Republican Party, including one without Mr. Trump himself. It involves holding together culturally disparate elements of the electorate – embodied by well-off Republican donors and blue-collar workers who want someone fighting for them in Washington.

The survey shows how much Mr. Trump dominates today’s Republican Party, but provides no guarantee that he would be its leader heading into the 2024 presidential race. Some 66% of Trump 2020 voters said they’re more supporters of Mr. Trump than of the GOP. But only 54% said they’d definitely support the former president, were he to run again.

Divisions within the Trump electorate were evident in the poll on numerous issues: Some 60% said foreign trade helps the U.S. economy, while 40% said it hurts. Only 54% agreed that cutting taxes on the rich helps grow the economy for everyone. Climate change, too, brought a diversity of views, with only 34% of Trump voters saying that it’s “not real and government should do nothing to combat it.”

What’s clear is that, whoever carries the Trump mantle forward can’t alienate key swaths of voters, including those who helped the GOP win state legislatures and narrow the Democratic margin of control in the U.S. House of Representatives, even as Democrat Joe Biden was winning the White House. Mr. Trump’s considerable pull in 2020 was demonstrated in the 74 million people who voted for him, 11 million more than in his 2016 victory.

“Populism isn’t going away,” says Karlyn Bowman, an expert on polling at the American Enterprise Institute in Washington.

Around the country, Republicans are attaching themselves to Mr. Trump’s brand as they gear up to run for office in 2022. In Ohio, former state Treasurer Josh Mandel is running for the U.S. Senate seat being vacated by retiring GOP Sen. Rob Portman. “Help protect the future of Pres. Trump’s America First Agenda,” he said in a fundraising tweet Thursday.

In Arkansas, former Trump press secretary Sarah Huckabee Sanders is running for governor, and has already chased the lieutenant governor out of the race. In her announcement video, she leaned more on her service to Mr. Trump, who endorsed her candidacy early, than on father Mike Huckabee’s tenure as governor there.

So is it still Mr. Trump’s Republican Party?

For now, yes, says a former Trump 2020 campaign official speaking on background. But the future is tough to predict. Some see Mr. Trump fading in public consciousness as the 2022 and 2024 elections gear up, even if Mr. Trump gets involved, as expected, by appearing at rallies and in the media.

Others see the former president getting a new lease on political life with an expected acquittal in the current impeachment trial – along the lines of “what doesn’t kill you makes you stronger.”

Some analysts say there’s no Trumpism without Mr. Trump, that Trumpism is as much about his fighting spirit as about the policies. Maybe. The former campaign aide sees potential for a candidate who “fights for the things Donald Trump fought for on the policy side, but doing it with Ronald Reagan’s voice, full of optimism and hopefulness.”

Kevin Madden, a former Republican strategist, is less sanguine about the GOP’s future.

“The party has always flourished when it was the party of reform and the party of ideas,” Mr. Madden says, looking back to President Ronald Reagan’s tenure and before then, to when 1964 presidential nominee Barry Goldwater was the party’s conservative standard-bearer. But under Mr. Trump, “the party has been organized more around what it’s against than what it’s for.”

“The reality is that Trump will have as big an impact on the profile of the party as Ronald Reagan did,” says Mr. Madden, who left the party a year ago. “And he will serve as the identity of the party for likely the next 15 years, and potentially more.”