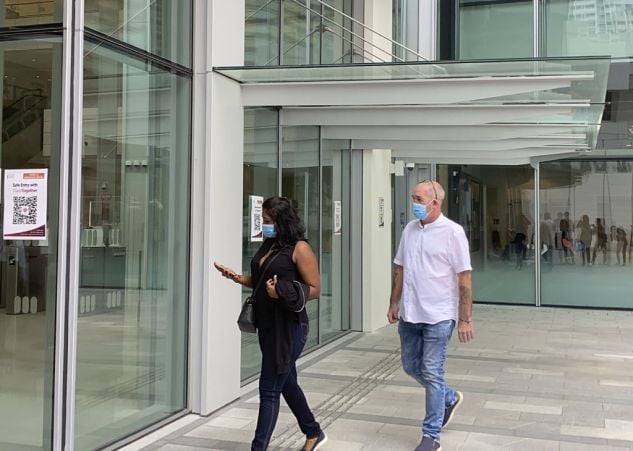 A British citizen has pleaded guilty to violating a coronavirus quarantine order in Singapore by leaving his hotel room and visiting his fiancee in another room.

They are to appear in court for sentencing on February 26 and face a possible sentence of up to six years in jail and a fine of 10,000 Singapore dollars (£5,435) on each charge.

Skea Nigel left his room at The Ritz-Carlton, Millenia Singapore hotel on three occasions in September, according to the charge sheets.

He was not wearing a mask.

On one of the occasions, Nigel climbed an emergency stairwell and entered a room that his Singaporean fiancee had booked.

The two spent nine hours together.

Most travellers have to stay in an assigned hotel room or at home for 14 days after arriving in Singapore under coronavirus quarantine rules.

They receive meals and regularly record their temperatures.

Nigel arrived at the State Courts on Monday with Agatha Maghesh Eyamalai, whom he has since married.

The Briton said he was guilty of two charges for flouting the rules.

Four other charges against him were temporarily withdrawn.

The prosecution asked that Nigel be jailed for four weeks and fined 1,000 Singapore dollars (£543).

Defence lawyer Dhillon Surinder Singh, who is also representing Eyamalai, asked for a fine or a one-week jail term “to give him a slap on a wrist”.

Eyamalai also pleaded guilty to one charge of aiding Nigel.

No Briton has been jailed in Singapore for breaking coronavirus rules.

A handful have had their work passes revoked and paid fines.