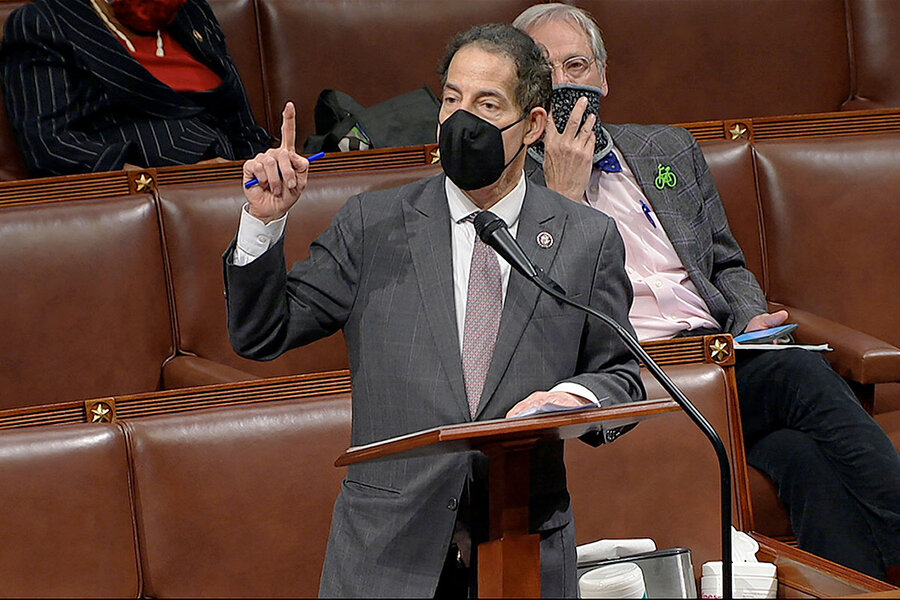 On Jan. 6, one day after burying a son lost to suicide, Rep. Jamie Raskin told his family he had to go back to work. It was his constitutional duty. Congress was set to count each state’s Electoral College votes, showing a victory of 306-232 for Joe Biden.

But amid a devastating week, his family wanted to be together. So Mr. Raskin, a Maryland Democrat, brought his daughter and son-in-law with him to witness the peaceful transition of power. He assured them it would be safe. It’s the Capitol, he said.

There, Mr. Raskin gave a speech on the floor, his family members watching from the gallery above. He made an appeal for unity, referencing Abraham Lincoln’s Lyceum address, in which Lincoln warned of internal threats and decried the increasing prevalence of mob violence.

None of them realized that outside, Trump supporters had overrun police barricades around the Capitol and were scaling its walls. Over police radios had come the word: This is now effectively a riot.

By the time Mr. Raskin heard pounding on the door “like a battering ram,” it was too late to reach his daughter and son-in-law, who had left the gallery and were barricaded in an office.

When they were finally reunited, Mr. Raskin promised his 24-year-old daughter it would not be like this the next time she came to the Capitol.

Dad, she said, I don’t want to come back to the Capitol.

“That one hit me the hardest,” said Mr. Raskin, the lead impeachment manager for the House, his voice quavering. “That, and watching someone use an American flagpole, the flag still on it, to spear and pummel one of our police officers.”

When the impeachment trial recessed, Sen. Tom Cotton of Arkansas, a staunch ally of President Donald Trump, came over to Mr. Raskin, talking with him and placing his hand on Mr. Raskin’s arm for several moments.

It was, perhaps, a rare moment of bipartisan support amid an impeachment trial that is deeply divided along partisan lines, but it underscores the deeply personal nature of the events at the center of it. Each lawmaker who was there that day has his or her own story, his or her own memories, many of which were brought back vividly by the rapid-fire succession of video clips shown this week. Although they themselves were witnesses, many – especially on the Senate side – were evacuated so quickly that they are only now realizing the full scope of the siege and how close the mob got to them.

For Democrats, the evidence overwhelmingly proves that Mr. Trump is guilty as charged of inciting an insurrection. “Until they walked us through, ‘Here’s what Trump is saying, here’s what he’s tweeting, here’s what the mob is doing outside, here’s what we’re doing inside the chamber’ and put it on the same timeline, I don’t think most of us really grasped that,” Sen. Chris Coons of Delaware told reporters. “How can you watch this and not vote to convict?”

Yet even as Republicans grapple with their own emotions provoked by the footage and their individual memories of the day, it appears unlikely to sway many on the matter of Mr. Trump’s culpability and the proper course of action.

“It was reliving a horrible day. A horrible day,” said Sen. Rob Portman of Ohio, adding that it was especially hard for staffers who were not evacuated with senators and heard people banging on the doors of offices where they took shelter. “The emotions of the Jan. 6 attack were all brought back up again. But there’s still the legal questions that we have to struggle with … [and] what is the best approach in terms of the Senate’s role jurisdictionally.”

All but six of the 50 GOP senators voted this week that it is unconstitutional to hold an impeachment trial for a president who has left office, since the punishment for impeachment is removal from office. (If there were a conviction, a subsequent vote could be held on whether to prohibit Mr. Trump from ever holding federal office again.) Democrats and constitutional lawyers, including some prominent conservatives, say that there is precedent for holding impeachment proceedings against a former official. They also point out that Mr. Trump was impeached before his term ended.

The House impeachment managers argued earlier this week that Mr. Trump engaged in a pattern of rhetoric throughout his presidency that encouraged dangerous views, including the unsubstantiated claim that the 2020 election was marred by widespread fraud. Despite his legal team failing to persuade courts across the country in dozens of election lawsuits and all 50 states certifying the results of their Electoral College votes, he still called on his supporters at a Jan. 6 Save America March to walk up Pennsylvania Avenue to the Capitol, saying, “If you don’t fight like hell, you’re not going to have a country anymore.”

On Friday, Day 4 of the trial, Mr. Trump’s defense team sought to characterize the former president’s remarks at that rally as within the bounds of passionate political speech, which they said should be protected for Democrats and Republicans alike. They presented video montages of Democrats, including some senators, using language like “fight like hell” in their speeches, raising the hackles of many who saw the presentation as creating a dangerous false equivalency.

Mr. Trump’s lawyers also argued that the attack was premeditated, and pointed out that before the president had even finished his speech and called on his supporters to march to the Capitol – a half-hour walk away – the first wave of protesters had already overrun police barricades and the U.S. Capitol Police chief had already asked for a declaration of emergency and the deployment of National Guard troops.

By the time the Senate was evacuated at 2:30 p.m., rioters had been in the building for 18 minutes. At 2:15, some had bounded up one of the main staircases just outside the Senate chamber, and near a room where Vice President Mike Pence was sheltering with his family.

Capitol Police Officer Eugene Goodman, in one of the most crucial decisions of the day, led them away from those doors toward a different entrance to the Senate, where more officers were waiting.

Senators watched this week as security camera footage, never before shown publicly, revealed how the police officers formed a barricade with their bodies while senators were evacuated via a back door and rushed through a corridor not 60 paces away from where angry Trump supporters were amassing.

“You could feel the emotion return to the Senate floor in a way that … definitely affected the majority of that body,” said Sen. Cory Booker, a New Jersey Democrat, who brought M&M’s and other snacks to share with colleagues through the long days of arguments.

Some senators were visibly upset during the airing of the video footage. And many highlighted those who faced far more challenging circumstances that day, especially law enforcement.

“I just remember there was a police officer who was there by us, and she kept saying, ‘I want you to be careful, but I want you to hurry,’” recalls Sen. Maria Cantwell, a Democrat from Washington. What struck Senator Cantwell most about the footage she saw this week was not how narrowly she and her colleagues avoided danger, but how much law enforcement did to protect them. “Your heart breaks for the violence that the police officers endured, for hours, which we didn’t have a full understanding of then.”

Likewise on the Republican side of the aisle, Sen. Jerry Moran of Kansas said after watching the “heart-wrenching” videos, he was filled with “empathy for law enforcement officers, and appreciation, and gratitude.”

The events of the day ultimately left three police officers dead, including two by suicide, with many others injured.

As one of the House impeachment managers, Rep. Eric Swalwell of California, talked about the brutality police faced that day and invoked the biblical promise “Blessed are the peacemakers,” the Capitol Police officer assigned to the press gallery looked upward, with tears in his eyes.

Sen. Elizabeth Warren, a Massachusetts Democrat, said she found it hard to watch the footage of people who were terrified, hurt, or under threat, and then try to make eye contact with Republicans “who just wanted to look off.”

“The Republicans who stand with Donald Trump are his enablers,” she said.

Many GOP senators said those who engaged in violence should be prosecuted to the fullest extent of the law, and agreed that what happened on Jan. 6 could have been even more deadly. Men with zip ties in their hands were seen jumping over seats in the Senate gallery not long after the senators had been evacuated, while others roamed the halls yelling, “Hang Pence!” But some Republicans took issue with the all-or-nothing Democratic framing.

“What they’re trying to do is bring all the emotions out and say, ‘This is so horrible – you’re going to do nothing?’” says Republican Sen. James Lankford of Oklahoma, who became visibly emotional at one point in the chamber, which he later attributed to recalling the story of a particular individual he knows well and their escape that day.

“I think what they’re trying to paint is, if you don’t impeach the president then all these people will walk away scot-free,” he says, referring to the rioters, more than 230 of whom have been charged so far. “And that’s not true.”

Sen. Raphael Warnock, one of two Georgia Democrats who narrowly won in Jan. 5 Senate runoff elections, was not in the Capitol that day. Nevertheless, he empathizes with who those who were, including the cafeteria staff in the basement who locked themselves in a break room and barricaded the door with tables.

“My heart goes out for everybody who was here that day, especially the Capitol Police officers, the law enforcement officers, the people in the Capitol that too often we don’t see – the janitorial staff, the people who are just here every day doing their job,” says Senator Warnock, a pastor. “I think the trauma that they endured is unspeakable. And we need to honor that by the work that we do not just during this impeachment trial … but in the days ahead.”

“There is no healing without accountability,” he added. “And that’s the process that we are appropriately working through right now. And I take it very seriously. It’s a profound responsibility. And it is above politics.”