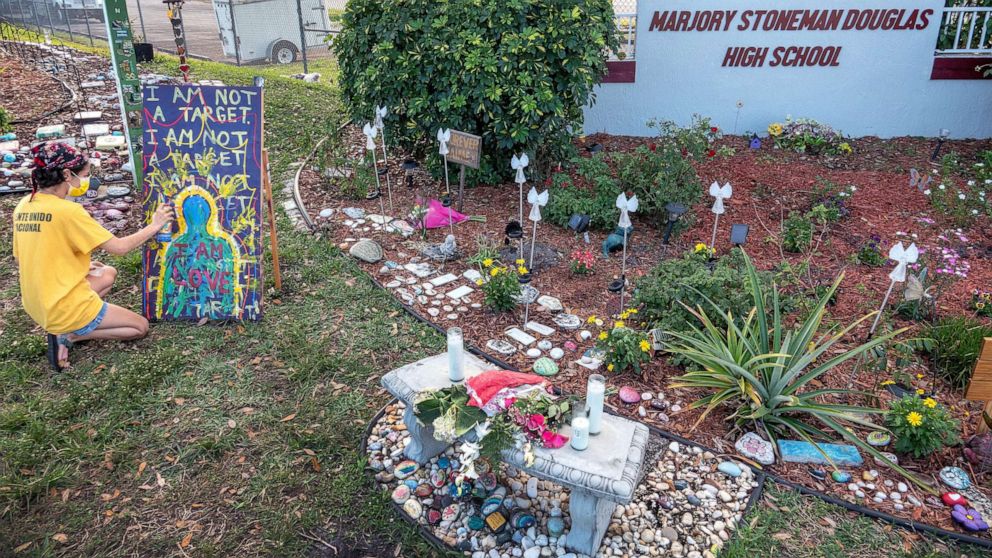 Three years after a gunman brought an AR-15 to Marjory Stoneman Douglas High School in Parkland, Florida, killing 14 children and three staff members, 17 families are still mourning their loved ones.

“Every day I don’t have Alex at the dinner table. And I can’t give him a hug or a kiss. And I can’t tell him I love him. And I can’t tuck him into bed. I don’t get to go to any of his basketball games,” he said. “I’m not gonna ever be able to teach him how to drive. This year he’d be graduating, going to college … it’s just really painful.”

For the survivors, the wounds are just as fresh.

Lauren Hogg, a freshman at the time of the shooting, lost several friends in the massacre, and was among the students who founded March for Our Lives in the weeks that followed. Three years after that life-changing Valentine’s Day, Hogg pushes through daily post-traumatic stress to fight for gun reform, while parents like Schachter are channeling their grief into action.

‘Every time I wake up I still feel it’

In the aftermath of the rampage inside Stoneman Douglas’ 1200 building, returning to school was “absolute hell,” Hogg, now 17, told ABC News.

“Every single day … we had to walk past the building where the shooting happened. And people were just so unwell, mentally unwell, including myself,” she said. “Stoneman Douglas was such a toxic, toxic place after what happened … there were almost 5,000 students that went through an extremely traumatizing event and didn’t get the mental health resources we needed.”

“The militarization of our school did not help at all. If anything, it made the aftermath of the shooting 10 times more traumatizing,” Hogg said, recalling seeing a school resource officer with an AR-15 on his hip as she ate lunch.

“They thought that made us feel safe, but they were completely wrong,” she said. “I think if anything they just made it worse, especially on Black and brown students.”

The district did not respond to Hogg’s allegations directly but referred ABC News to statements on its security improvements and mental health resources.

The district said it’s invested millions of dollars in safety improvements over the last three years, including: increased security and mental health staffing; upgraded surveillance camera and intercom systems; improved partnerships with local law enforcement; additional drills and staff training; proactive threat assessment and tip monitoring; perimeter gates around every school; and a single point of entry in all schools.

“Broward County Public Schools continues its commitment to offering wellness and emotional support to our students and staff to this day,” the district told ABC News Friday.

The 1200 building will be demolished after the conclusion of the trial, ABC affiliate WPLG reported. The suspect, former Stoneman Douglas student Nikolas Cruz, is still awaiting his trial which was delayed due to the pandemic. Cruz’s attorneys have said he would plead guilty in exchange for a life sentence, but prosecutors are seeking the death penalty and want to go to trial.

“I love being a student. And that’s something I’ve kind of rekindled my love for since I moved away from Parkland, because I actually am able to learn where I am now,” she said.

But the post-traumatic stress is ongoing.

“It’s a struggle I deal with every single day… it’s horrible,” she said. “Every time I wake up I still feel it. It’s honestly just exhausting.”

“Channeling that emotion into my advocacy … is the healthiest thing I can do,” she said, “because what we fight for is love and resistance and liberation for everyone.”

‘It’s time for them to do something’

Each day in the U.S., over 100 people are shot dead and more than 230 others are hurt by gunfire, according to Everytown for Gun Safety.

One month after Parkland, the 28 survivors who founded March for Our Lives had already galvanized a movement. In March 2018, hundreds of thousands of Americans, including inspired students, concerned parents and angry teachers, joined a March for Our Lives rally in Washington, D.C., along with hundreds of simultaneous satellite rallies across the country.

March for Our Lives then turned its attention to the 2018 midterm election, pushing for youth turnout.

In 2021, March for Our Lives is going strong with hundreds of chapters across the U.S. Their mission goes beyond school shootings — they want to end all gun violence and work to mobilize young people “to fight for sensible gun violence prevention policies.”

March for Our Lives’ next goal is pushing the Biden administration to address gun violence, Hogg said.

“It’s time for them to do something. I feel like for so long we were just knocking on the door of the Republican-held White House and Senate, just trying to get them to listen,” she said. “Finally we have the chance to actually walk through that door.”

The Biden campaign has promised actions including: banning the manufacture and sale of assault weapons and high-capacity magazines, and creating a buy-back program; ending the online sale of guns and ammunition; addressing gun suicides; and requiring background checks for all gun sales and “adequately” funding the background check system.

For Hogg, the biggest legislative priority is passing universal background checks. She also hopes the age to buy assault rifles will be raised to 21, though she said she’d prefer to see assault rifles banned altogether.

Five years from now, Hogg said she hopes March for Our Lives won’t have to exist.

“I would hope that the Biden administration would get it together and pass gun laws so that people aren’t constantly dying in the United States from gun violence, whether it be in a school or a synagogue or a movie theater or outside of their house on their street walking to school,” she said.

“More realistically,” she said, in five years she said she hopes to see the White House including youth gun advocates in the administration, because “we’re the ones dealing with these injustices.”

‘I don’t want his death to be in vain’

Parkland survivors weren’t the only ones to take action — grieving parents did, too.

Fred Guttenberg, whose 14-year-old daughter, Jaime, a talented dancer, was killed, has become a staunch advocate for gun reform. He released a book last year about his experience.

“I never realized that such a violent individual was going to school with Alex,” Schachter said, referring to Cruz, the accused gunman. “Schools aren’t transparent with that type of information.”

“When I realized that all the data the state collected was on the state Department of Education website in just a massive excel spreadsheet that was completely unusable, I wanted to give parents this information,” Schachter said. “Parents will now have the information they need to start a conversation with their school district.”

The dashboard also aims to help school officials by giving them insight into violence in schools in their area.

Schachter hopes the Florida dashboard will be expanded nationwide.

In honor of Alex, who was a talented trombone player in the school marching band, Schachter’s nonprofit also runs a program that provides free, private, online music lessons to middle school band students in low-income communities.

“It was so wonderful for Alex and we want to give that opportunity to as many children that are being affected by COVID as possible,” Schachter said.

As the three-year mark without his son approaches, Schachter said, “I’m hoping that he’s looking down on everything I’ve done for the last three years and he’s proud of me. … That’s why I continue doing what I do — I don’t want his death to be in vain.”