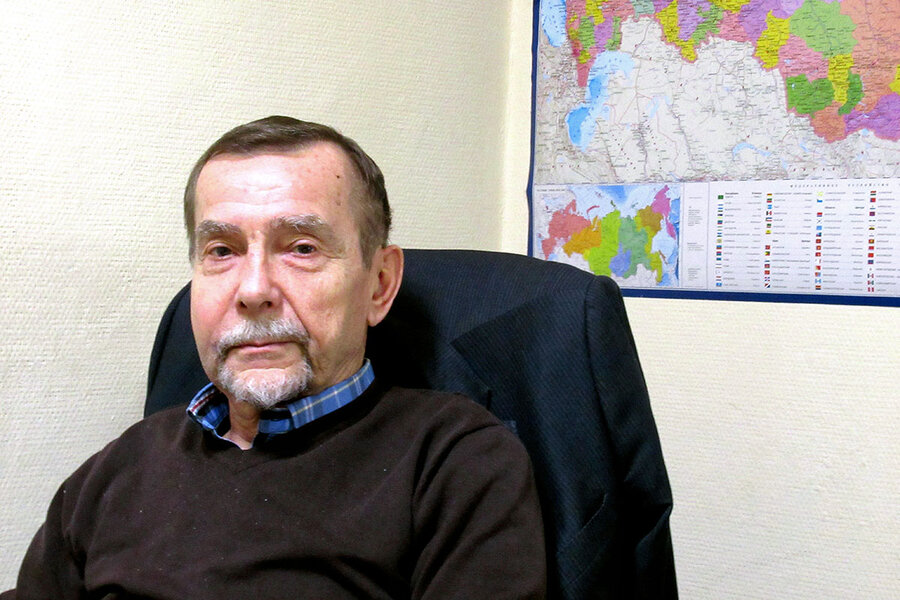 Being labeled a “foreign agent” by the Kremlin has historically been a terrible stigma in Russia. But ask Lev Ponomaryov, one of the first Russians to be individually branded as such under a newly amended law, how it affects him, and he simply laughs.

“For me, it’s a badge of honor,” says the Soviet-era democracy activist, former parliamentarian, and staunch critic of the Kremlin. “Those who know me and my work take it humorously, or congratulate me on my new title. But for people who do not know me or are not interested in human rights, it seems that the first thing they ever hear about me is that I’m a foreign agent. I don’t like that.”

Mr. Ponomaryov and people like him might be canaries in the coal mine amid President Vladimir Putin’s changing Russia. Many Western commentators appear convinced that there is no longer any political space for critical opposition to the Kremlin, particularly after what has happened to prominent opposition figure Alexei Navalny, whom Mr. Putin allegedly ordered poisoned last year. Upon Mr. Navalny’s return to Russia last month after recuperating, he was sentenced to a long prison term.

But the situation on the ground looks much more complicated.

Hundreds of civil society activists continue to work in nongovernmental organizations on behalf of causes – such as human rights, environmentalism, election monitoring, prison reform, and legal defense against official abuses – that often bring them into friction with the authorities. Chief among their problems have been increasingly tough laws, enacted over the past eight years, which require any group that engages in activities deemed “political” and receives any amount of funding from abroad to register as a foreign agent. Failure to do so means tough fines and possible closure.

But the law has been applied unevenly over the years and, although scores of organizations remain on the blacklist, not very many have actually been shut down.

Under a new amendment to the law that came into effect in December, media organizations and individuals can now be labeled as foreign agents for the first time. The initial list, published by the Ministry of Justice, names several media outlets, including the Voice of America and Radio Free Europe/Radio Liberty. Five individuals are listed, without explanation, including four journalists and Mr. Ponomaryov.

“The term ‘foreign agent’ had a certain terrifying resonance in the Stalin era,” says Boris Altshuler, a human rights activist in Moscow and contemporary of Mr. Ponomaryov. “But this formula has been applied to many NGOs since 2012, and so far hasn’t entailed anything terrible. Many people just laugh at it, and some compare it metaphorically with a high state award. It’s not clear what the individual designation will mean for Lev Ponomaryov in practice.”

“We are seeing a turn for the worse”

Mr. Ponomaryov already heads three organizations that have long been on the blacklist. His personal designation came as a bit of a surprise to him, and he says it’s too soon to say how much difference it will make. One thing he’s noticed is that any article he publishes, such as his regular blog on the website of opposition-friendly radio station Ekho Moskvy, must contain a subhead at the top, in letters twice the size of the text, warning that the author of the article is fulfilling the functions of a foreign agent.

A visit to his office in central Moscow in early February found it bustling with activity, with several staffers working computers and telephones, and Mr. Ponomaryov receiving people for regular consultations.

“This law doesn’t affect the number of people who appeal to us for assistance,” he says. “When someone finds themselves in need of human rights representation, there really aren’t very many places they can turn to.”

The National Public Organization for Human Rights, Mr. Ponomaryov’s main group, helps with legal advice, writing letters to relevant officials, and publicizing cases in the media. Its clients include Jehovah’s Witnesses, who’ve been categorized as “extremists” under Russian law and severely persecuted; people associated with Hizb ut-Tahrir, an Islamist political organization that’s been banned in Russia; and a wide range of people suffering from police abuses, especially denizens of Russia’s vast prison system.

“Any public activity, if it attracts attention, will be considered political by our authorities,” Mr. Ponomaryov says. “They start from the premise that anyone must be a foreign agent if they engage in criticism” of the state.

He admits that about two-thirds of his financial support comes from sources outside Russia, but the only one he will name is the United Nations Committee Against Torture, which helps to fund his investigations into abuses in Russian prisons.

“Our work is effective. I have people working with me, and I have to pay them,” he says. “About a third of our money comes from crowdfunding in Russia. But it’s very hard to find donors in the Russian business community who aren’t afraid. So, we have to look elsewhere.”

When his organization was first blacklisted eight years ago, Mr. Ponomaryov says he wrote a letter to Mr. Putin saying it was a shame to live in a country where the leading advocates of human rights were considered to be foreign agents. Mr. Putin responded, the group was taken off the list, and Mr. Ponomaryov received funding from the Presidential Grant Foundation for seven years.

But something has changed in the past few years, and Mr. Ponomaryov no longer receives official funding. He blames the FSB security forces, which he claims are growing in power and trying to build a fascist state in Russia.

“Putin might not be the most orthodox of people, but he did read my letter and arrange presidential grants,” he says. “But things are changing, and there is no longer any money for human rights advocates. We are seeing a turn for the worse.”

A law about information, or about fear?

Andrei Klimov, a member of Russia’s upper house of parliament and chair of the committee that wrote the amendment to the “foreign agent” law, declines to discuss Mr. Ponomaryov’s individual case. But he staunchly defends the law as a reasonable response to what he calls outside interference in Russia’s domestic affairs.

“There are some groups, mainly Russian citizens, who are involved in the real political life of this country and receiving financial support from abroad,” he says. “The people of Russia have a right to know who, and with whom, they are dealing. So, these groups need to prepare special reports, and make sure to mark all their public statements as the work of foreign agents. This doesn’t prevent them from engaging in their activities.”

Mr. Klimov says worse things happen in the U.S., such as declaring the state-funded RT television network as a foreign agent under the Foreign Agents Registration Act, and the arrest and imprisonment of Russian student Maria Butina, who was charged with acting as an “unregistered lobbyist” but was frequently described as a “spy” in U.S. media reports.

He adds that U.S. laws, such as the 2017 Countering America’s Adversaries Through Sanctions Act, officially mandate U.S. meddling in Russian affairs. “We must protect our sovereignty, block outside interference in our internal political processes,” he says. “It’s just a reaction.”

So far Russia’s “foreign agent” laws have had little impact, but activists worry that they may signal more severe future intentions.

“Our authorities may reference something happening in the U.S., but this law is driven by their own fear of Russian civil society. They see it as the enemy,” says Natalia Taubina, director of the Public Verdict Foundation, a Russian human rights group that has also been cut off from official funding and branded a foreign agent.

“But there is nothing political in our activity. We’re not trying to change the regime, participate in elections, or support any political party. We’re trying to do human rights work. I think the goal our authorities are pursuing is to silence us.”