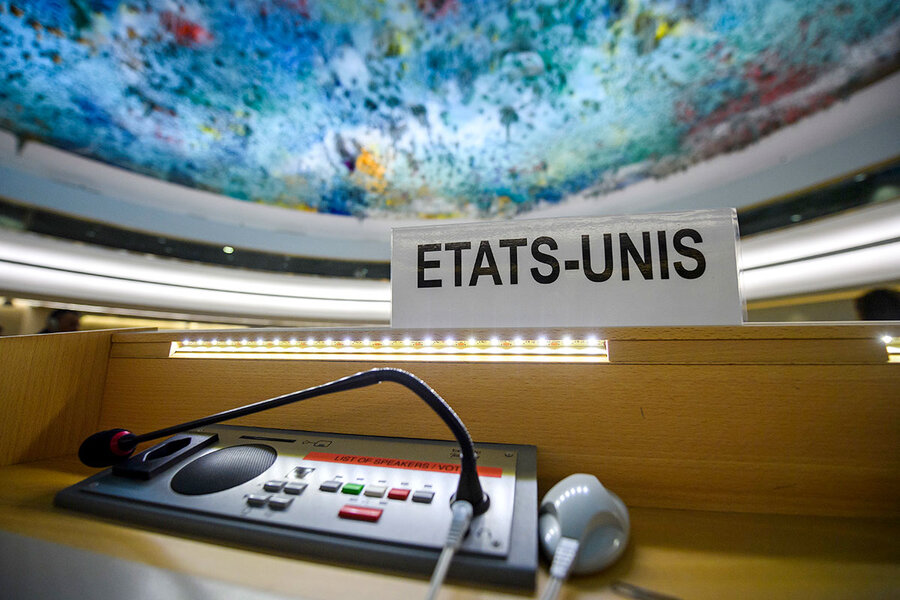 The U.S. decision has revived a debate that has simmered since even before the HRC replaced the widely discredited U.N. Human Rights Commission in 2006: Is the cause of international human rights better served when the U.S. brings its vision of universal values and support for democratic principles to the global table – even if that table is flawed?

Or is the U.S. better able to advance human rights around the world by focusing its energies on other rights-promoting venues – and keeping its power and prestige outside the HRC – as a means of pressuring the council to undertake serious reform?

Advocates of human rights have strong views on both sides of the debate. Where they largely agree is that powerful authoritarian voices – most notably China – have increased their volume and become more assertive in recent years in pursuing a vision of human rights quite different from the Western focus on individual rights and freedoms.

Disagreement is not over whether the U.S. should promote human rights, but instead over how and where the U.S. can best promote its vision.

“Yes, the Human Rights Council has been spotty, but it is clearly an improvement over what came before it, and the United States was an important part of that improvement,” says John Cerone, a special adviser to the first U.S. delegation to the HRC under the Obama administration.

As an example, he points to the innovation of the universal periodic review, which regularly evaluates the human rights performance of every one of the U.N.’s 193 member states. Other improvements include growing use of “commissions of inquiry,” which have looked into particularly egregious cases of human rights deterioration, such as in Syria and Libya, and what he says is a “reduced even if still disproportionate focus on Israel” on the agenda.

The HRC “has made important gains, and it’s important to point out that the improvements occurred when the U.S. was on the council,” says Mr. Cerone, now a professor of international law at Tufts University’s Fletcher School in Medford, Massachusetts.

Yet even critics who acknowledge some improvement in the HRC over its 15 years say the Biden administration’s decision to “reengage” is premature and will only lend legitimacy to a body whose members currently include China, Russia, Cuba, Uzbekistan, and the Philippines.

“If you look at the Freedom House rankings, you see that most of the world’s worst respecters of human rights get elected to the council and then are able to exert their priorities over their term,” says Brett Schaefer, an expert in global politics and international institutions at the conservative Heritage Foundation in Washington.

“Biden is essentially following in the footsteps of the Obama administration when it said, ‘We’re going to work from within the council to improve it,’ but the results were almost nothing,” he adds. “They’re putting the U.S. seal of approval on the status quo and bestowing U.S. legitimacy on the world’s worst violators of human rights.”

Staying out of the council until it undergoes “serious reform” would not have left the U.S. without multilateral venues to promote human rights, Mr. Schaefer says. He points to the Organization for Security and Co-operation in Europe, which he says has pressured Belarus over its human rights failings; and the Organization of American States, which has kept Venezuela’s rights abuses and democratic backsliding at the top of its agenda.

Of course, remaining outside the HRC on principle would have denied the U.S. one diplomatic arena in which to express its perspective on the crisis in Myanmar.

When Mark Cassayre, chargé d’affaires of the U.S. mission in Geneva, called on council members Friday to “join the United States” in urging Myanmar’s military to “restore power to the democratically elected government [and] demonstrate respect for human rights and fundamental freedoms,” it lent the powerful voice of the U.S. to the cause for freedom there.

Still, Mr. Shaefer says a better U.S. approach to the HRC and its long-term effectiveness would have been to dangle the possibility of a U.S. return as a carrot to encourage reform. “The U.S. should say, ‘We have some specific ideas for improvement, and we want to see some attention to these ideas before we reengage with the council,” he says.

But some human rights advocates shudder at that kind of prescription for U.S. action, saying it’s a reminder of an American arrogance that turns off much of the world – and which harks back to a bygone era of U.S. superiority.

“We’re not in the post-WWII era anymore, when the U.S. and the West generally said, ‘We’ve got this figured out; the rest of you need to be like us right now,’” says Kerstin Bree Carlson, an associate professor of international law at the University of Southern Denmark in Odense.

The HRC was “not created for human rights angels,” she says, but with the idea of encouraging “an upward trajectory on human rights” among U.N. member states and calling global attention to cases of serious backsliding and gross violations.

Ms. Bree, who will soon publish a book on the march of human rights in Africa, says her research underscored the positive role the HRC has played in several instances, often with very critical investigations. Pointing to her own work in South Sudan, for example, she says, “It’s the council that was on the ground … [bringing] a focus on human rights to an issue otherwise largely overlooked.”

In that context the U.S. can play a welcome role, she says, “but not from the perspective that it is the ultimate referee judging from somewhere on high each country’s trajectory.”

For the Fletcher School’s Professor Cerone, the U.S. should not stand aloof, with the idea that the council needs the “added legitimacy” the U.S. brings with it. “The Human Rights Council is seen as a legitimate body by most of the world,” he says.

What the U.S. does bring to the HRC is its diplomatic influence, its considerable resources, its voice for human rights – all reasons like-minded allies “will be very grateful the U.S. is back,” he says.

“The U.S. can be constructive on human rights issues, and in ways other states can’t,” he says, “because they just don’t have the soft power of the United States.”