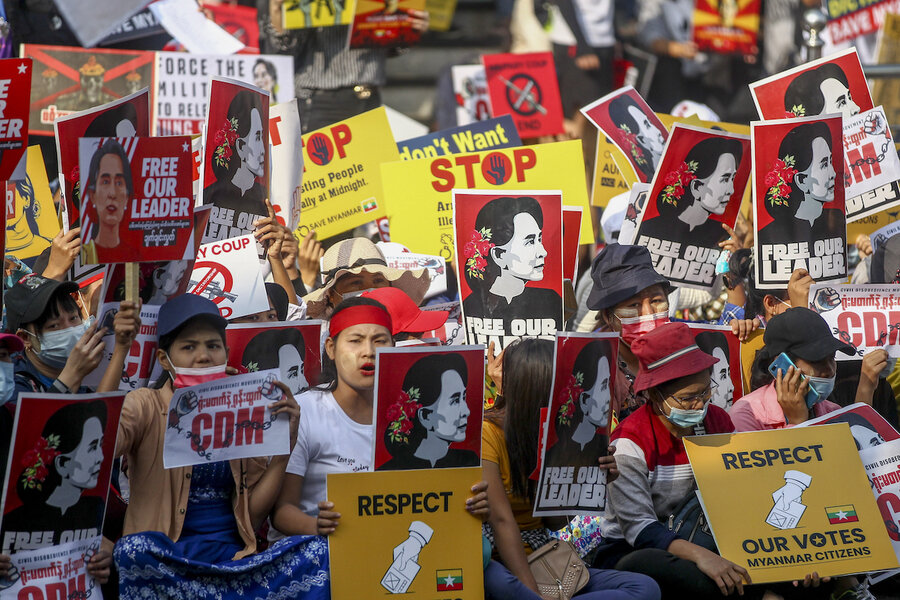 Police in Myanmar filed a new charge against ousted leader Aung San Suu Kyi, her lawyer said Tuesday, in a move that may allow her to be held indefinitely without trial as part of an intensifying crackdown by authorities who seized power in a coup.

Ms. Aung San Suu Kyi, who was deposed and detained in the military takeover on Feb. 1, already faced a charge of illegally possessing walkie-talkies – an apparent attempt to provide a legal veneer for her house arrest. Under the new charge, she is accused of breaking a law that has been used to prosecute people who have violated coronavirus restrictions, lawyer Khin Maung Zaw told reporters after meeting with a judge in a court in the capital, Naypyitaw.

It carries a maximum punishment of three years in prison. But, perhaps more worryingly, because of changes to the Penal Code instituted by the junta last week, it could allow her to be detained indefinitely, even without a court’s permission. Ms. Aung San Suu Kyi’s lawyer told reporters he has not seen her since her arrest – and only arrived after an unexpected videoconference the judge said had been held with her.

The legal maneuver comes two weeks after the military seized power in a coup that shocked many in the international community who had been hopeful that Myanmar was taking steps toward democracy. Since then, the junta has ratcheted up the pressure on protesters resisting the takeover, including violently breaking up some demonstrations and blocking internet access.

On Monday, security forces pointed guns at a group of 1,000 demonstrators and attacked them with slingshots and sticks in the city of Mandalay. Local media reported that police also fired rubber bullets into a crowd and that a few people were injured.

Protests continued Tuesday in Yangon, the country’s largest city, and elsewhere. In Yangon, police blocked off the street in front of the Central Bank, which protesters have targeted amid speculation online that the military is seeking to seize money from it. Buddhist monks demonstrated outside the United Nations’ local office in the city.

Around 3,000 demonstrators – mainly students – returned to the streets of Mandalay, carrying posters of Ms. Aung San Suu Kyi and shouting for the return of democracy.

The protests are taking place in defiance of an order banning gatherings of five or more people. But the security presence was low-key around the march after Monday’s confrontations.

State media have been acknowledging the protest movement only indirectly. The Global New Light of Myanmar newspaper reported about a meeting of the State Administration Council, the new top governing body, and quoted its chief, Senior Gen. Min Aung Hlaing, saying the authorities “are handling the ongoing problems with care.”

It said the council discussed taking legal action against protesters and providing “true information” to the media. On Sunday and Monday nights, the military ordered an internet blackout – almost entirely blocking online access. Once before in recent weeks it imposed a similar blackout and has also tried less successfully to block social media platforms. It has also prepared a draft law that would criminalize many online activities.

While the military did not say why the internet was blocked, there is widespread speculation that the government is installing a firewall system to allow it to monitor or block most or all online activity.

The Global New Light of Myanmar newspaper also reported that council members discussed acting against a “parallel government” established by some elected lawmakers of Ms. Aung San Suu Kyi’s National League for Democracy party, who were prevented from taking their seats when the military stopped Parliament from opening its session Feb. 1.

In the days following the takeover, members of Ms. Aung San Suu Kyi’s party formed a committee, declaring themselves the true representatives of Myanmar’s people and asking for international recognition. No such recognition has come, even as the United States and other governments have condemned the coup and urged the military to return power to the elected government and release Ms. Aung San Suu Kyi and other detainees.

Neighboring China, meanwhile, has so far not condemned the takeover. Some protesters have accused Beijing – which has long been Myanmar’s main arms supplier and has major investments in the country – of propping up the junta.

China’s ambassador to the Southeast Asian country responded to those accusations, noting that Beijing has friendly relations with both Ms. Aung San Suu Kyi’s party and the military, according to the text of an interview posted on the embassy’s Facebook page Tuesday. Chen Hai said he wished the two sides could solve their differences through dialogue.

In the interview, Mr. Chen also addressed what he said were rumors that China was helping Myanmar to control its internet traffic and others that Chinese soldiers were showing up on the Myanmar’s streets.

“For the record, these are completely nonsense and even ridiculous accusations,” Mr. Chen said.

The military contends there was fraud in last year’s election, which Ms. Aung San Suu Kyi’s party won in a landslide, and says it will hold power for a year before holding new elections. The state election commission found no evidence to support the claims of fraud.