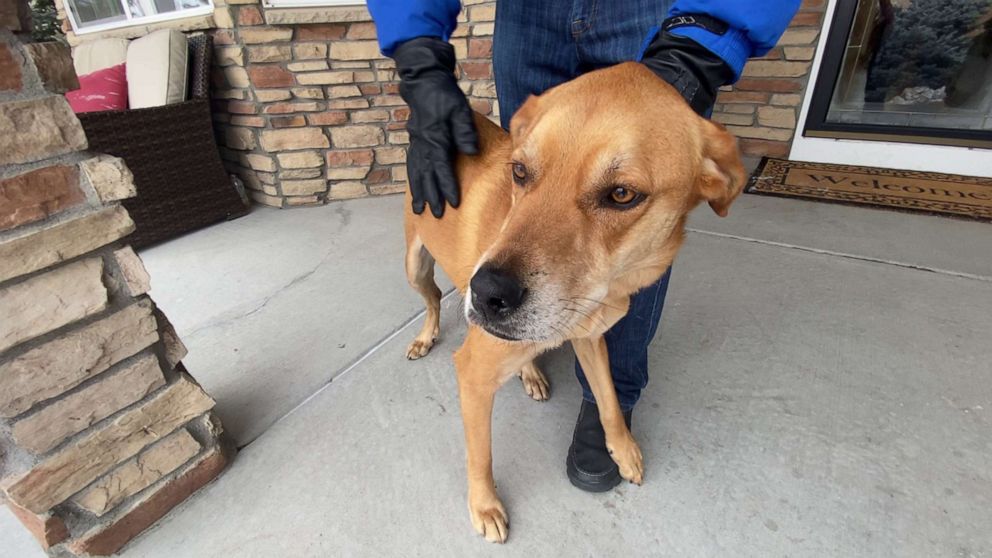 A Colorado man’s dog was found alive eight days after they were supposed to return home from a hike, authorities said.

Josh Hall, 27, and his dog, Happy, started a hike at the Hessie Trailhead in Boulder County on Feb. 3. Search crews started looking for them that night, hours after a significant winter storm was reported in the area.

There weren’t any signs of either of them until Thursday, when Happy was found on a highway about seven to nine miles from the trailhead, his family said.

Happy had lost about 10-15 pounds, but there were no signs of frostbite, Hall’s stepfather, Nick Vukson, told ABC Denver affiliate KMGH-TV.

The miraculous discovery still leaves many questions for Hall’s family.

“How can a domestic dog be up in the Rocky Mountains in some extremely severe conditions and emerge with no frostbite whatsoever,” Nick Vukson told the station. “We don’t know if maybe he had found some shelter and perhaps Josh was with him. We’re not sure.”

“Most of us have no idea how he got to that place, because we’re not even looking in that area,” Hall’s mother, Laura Vukson, said.

More than 70 rescuers looked for Hall in the days after he was reported as overdue, authorities said, but search efforts have recently been suspended due to dangerous weather conditions.

Hall, an experienced hiker, started out with Happy on the hike around 9:30 a.m. local time Feb. 3, the Boulder County Sheriff’s Office said. They should have left by 4 p.m. to return to his home in Arvada for a 5 p.m. online class, according to his family.

The Boulder County Communications Center was notified shortly after 6 p.m. that day that Hall was overdue from his hike. His cellphone was last pinged near the Devil’s Thumb Trail/Diamond Lake cut off, authorities said.

In an update on Friday, the Boulder County Sheriff’s Office said there are no “significant changes” to the search plans after Happy was found.

“Based on the location of Josh’s last cellphone ping, the terrain, and the belief that he was attempting to hike to Devil’s Thumb Lake, search crews have narrowed down the highest probability area where we believe Josh is,” the sheriff’s office said in a statement.

A search team was able to reach the east end of Devil’s Thumb Lake on Feb. 4, the sheriff’s office said, “but unfortunately, we have not been able to conduct a full search of this high-probability area due to the conditions,” which include white-out visibility, avalanche hazards, nearly chest-deep snow and high winds.

“We will not be able to conduct large ground searches for Josh due to safety concerns for the volunteer search and rescue teams,” the sheriff’s office said. “We will continue to look for breaks in the weather, which will allow an aerial search to be conducted in the high probability area.”

Hall’s family is holding out hope after Happy was found healthy, but are trying not to fear the worst.

“I’m terrified that that means that Happy stayed with Josh until he succumbed to the cold,” a tearful Laura Vukson told KMGH.

Hall was believed to be wearing a green khaki jacket and dark hat and carrying a grey or green backpack and black leash. He is 6’4″ and 200 pounds.

Anyone with tips or information is asked to contact Boulder County dispatch at 303-441-4444.