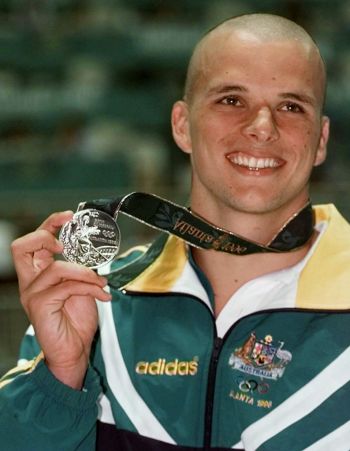 Scott Miller of Australia holds up his silver medal that he won in the men’s 100 metre butterfly at the 1996 Summer Olympics in Atlanta, © AP/Press Association Images

Police arrested 45-year-old Miller and a 47-year-old man, who has not been named, on Tuesday at their Sydney homes after finding methylamphetamine concealed in eight candles in January, a police statement said.

“Others, it will be alleged, are working under his instruction,” Mr Watson said.

The two men were allegedly distributing drugs from Sydney that were bound for regional New South Wales state.

“This was not a small operation,” Mr Watson said.

“They were well organised and well financed.”

Miller won a silver medal in the 100 metre butterfly at the Atlanta Olympics in 1996.

He was a member of the Australian 4 x 100 metre medley relay team in Atlanta which won bronze.