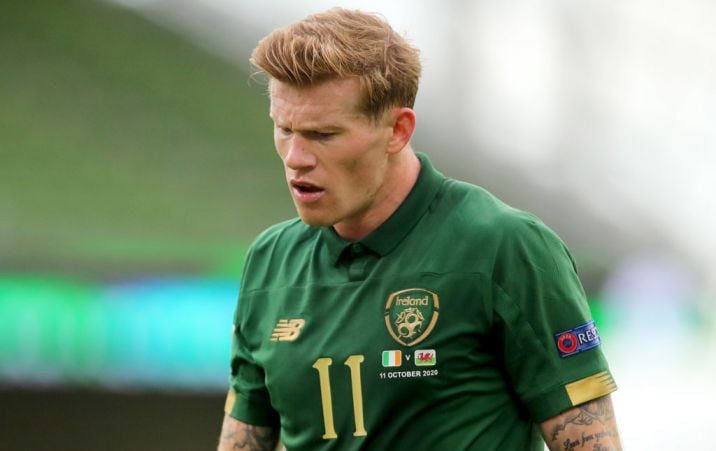 Republic of Ireland international James McClean has shared the latest abuse he has been subjected to on social media.

The Stoke City winger shared a screenshot of a direct message on his Instagram story, it read: “Don’t make me set your house on fire and burn everyone inside it.”

He had previously shared a lengthy message appealing for the ‘anti-Irish’ abuse to be dealt with.

“Banging my head against a brick wall here but I have been doing that for a long time so one more won’t make a difference,” he wrote.

“So much coverage this past couple weeks about discrimination and the condemnation of it across media outlets, players, ex players etc which is great to see because it’s wrong and idiots should be held responsible for their actions and words as nobody should be subjected to that.

“Make no mistake about it or to take anything away from that but just to pose the question… does being abused for being Irish and anti Irish abuse acceptable? Is it not popular enough to be seen to be… spoke out about too?”

McClean has highlighted sectarian abuse he has been subjected to online on a number of occasions in the past.

His wife Erin has also shared a statement regarding the abuse.

She wrote: “I’ve always kept relatively quiet about the abuse that James, myself and the family receive because I don’t like giving people the platform and it has become part of our daily lives this past nine years. There isn’t a day that goes by that either one of us doesn’t receive a message of some sort.”

She added: “It’s gotten to the point where it doesn’t affect us one bit, and hasn’t for a long time! However, we have three very young children who are now at an age where they know and understand these things being said. Of course we have tried as hard as possible to keep them away from it all but there have been times we are out shopping and there is people making remarks towards James in front of the kids.”

Watching him deal with this his entire career, so just having my say after 9 years of constant abuse. pic.twitter.com/5nEyujhpZw