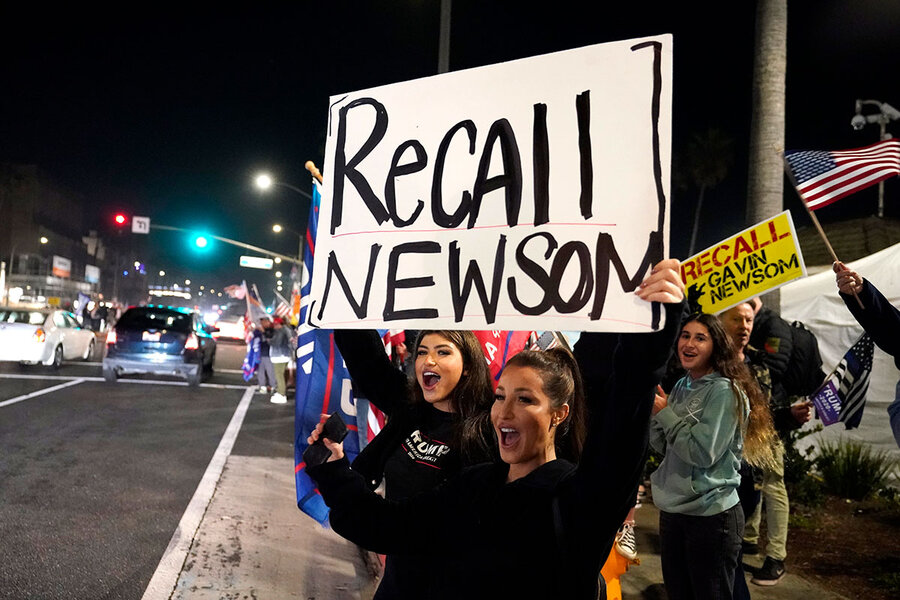 California Gov. Gavin Newsom was flying high in May. His approval ratings soared past 60% after the Democrat took decisive pandemic action, locking down his state. But two surges later, with most kids still not attending in-person school, his approval rating plunged and he’s facing the very real possibility of a recall special election this fall.

Other governors have seen ratings deflate. And other governors, too, have made mistakes in handling this once-in-a-century pandemic. But no other governor has been challenged quite like this one, says Jessica Taylor, of the independent Cook Political Report. Of all the state executives, she says, “he has the hardest state to manage.”

California is huge and complex, just as the pandemic and the fight against it are proving to be. These challenges are amplified in a state that mirrors the rest of the country. At a time when pandemic responses can get tangled in partisan politics, it’s a reminder that even in a blue state with a Democratic governor, what voters most want is competence and a sense of trust. And the bigger the place to be governed, the bigger the challenge, no matter what its political color.

California’s population of 40 million – by far the largest in the nation and larger than Canada – is stretched over sparsely populated forests, mountains, and deserts. It includes a flat, agricultural swath down its middle. And its coastline is studded with major urban centers.

Beyond that, it’s diverse. Latinos are now the largest ethnic group and a powerful force in politics. Silicon Valley billionaires sit atop a yawning wealth gap; the state has the highest poverty rate in the country and the most homeless. It’s the fifth largest economy in the world, spread over 58 counties from Los Angeles (10 million people) to Alpine (1,129).

“The scale in California is enormous. It’s so big, you can’t even conceive of it,” says Democratic consultant Garry South. New Zealand is praised for nearly eradicating the virus, but it’s only got 5 million people, he says. “Everything in California is giant sized, including when we have problems. In the case of the pandemic, that characterization applies in spades.”

This week, California passed New York for the most pandemic-related deaths in the nation (though it ranks 18th on a per capita basis). Vaccine distribution has been uneven and confusing, with rules changing for who qualifies. The governor has been sharply criticized for his on-again, off-again lockdown orders, as well as for hypocrisy in going maskless to a party at the exclusive French Laundry restaurant last November.

His handling of the pandemic has turned a Republican attempt to collect enough signatures for a special recall election from a long shot into a likelihood, though most analysts think he would survive.

Others, particularly Republicans, feel the governor has been far too heavy-handed. Officials, residents, and businesses have refused to comply with restrictions and filed a flurry of lawsuits. Last week, the state Supreme Court ruled against state rules banning indoor religious services due to the virus, saying they must be allowed, though the state can impose a limit of 25% capacity for at least the next month.

Is this California or the Midwest?

From the outside, California looks indigo-blue in its politics, but it has the same deep divisions as America as a whole. “Even though it’s a very Democratic state, there are regions that are very different,” says Eric Schickler, a political scientist at the University of California, Berkeley.

That makes it difficult to implement pandemic measures, he explains. “With the state being so diverse and complicated, it’s been really hard for Mr. Newsom to find a formula that can work across the state.”

On one end of the spectrum are progressives in San Francisco, where the school board last month decided to toss 44 school names, including George Washington, Abraham Lincoln, and even Sen. Dianne Feinstein, for being associated with racism or human rights violations.

It’s stirred outrage and caused Democratic Mayor London Breed to ask why the board was intent on renaming schools by April, when it did not have a plan to return students to school by then. Last week, the city sued its own school district to force reopening. This week, the unions and the district tentatively agreed on some reopening criteria.

On the other end of the spectrum are far-right extremists. After the Jan. 6 attack on the U.S. Capitol, federal officials arrested a man in California’s Napa County on weapons charges. They said that texts by the man, who had pipe bombs and machine guns among other weapons illegal in California, indicated he was targeting the governor, as well as Twitter and Facebook. He reportedly belongs to the Three Percenters, who have been connected to the plot to kidnap Michigan’s Democratic Gov. Gretchen Whitmer.

“There are parts of California that look [politically] like the Midwest,” says pollster Mark DiCamillo.

The pandemic now threatens the governor’s standing. It was only after Mr. Newsom’s maskless party appearance – for which he later apologized – that recall petition signatures began pouring in. Republicans need 1.5 million valid signatures by March 17, which they are likely to get, especially with the Republican National Committee now involved.

If there is a special election, though, experts say it’s unlikely that there will be a repeat of the 2003 recall of Democratic Gov. Gray Davis and the election of Republican Gov. Arnold Schwarzenegger – the only successful recall in California history. The state is now much more lopsided in favor of Democrats, who outnumber Republicans by a margin of 2-to-1. None of the GOP candidates so far has the star power and name recognition of the former actor. And Mr. Newsom’s job approval ratings are nowhere near as low as Mr. Davis’, which were in the low 20s.

Still, the governor has to take recent polling seriously. A poll last week by the UC Berkeley Institute of Governmental Studies asked specifically about the recall. The number of undecideds is “unusually high,” says Mr. DiCamillo, who directs the poll. “Newsom is well-known to voters, yet 20% of them say they’re unsure how they would vote. And the reason for that is they want results on COVID, and they’re waiting to see what happens.”

One challenge is erosion of trust. Nearly half of voters have no or little trust in Mr. Newsom and the state government in setting stay-at-home orders or guidance for businesses – including a quarter of Democrats and half with no party preference.

“Trust, and seeing your governor abide by the rules, matters,” says Ms. Taylor, at the Cook Political Report. “Some may have said that ‘Laundrygate’ was overblown, but there are people that have radically altered their lives and are not seeing loved ones.”

Mr. Newsom is not the only Democratic state executive under fire. New York Gov. Andrew Cuomo is facing calls for censure from lawmakers in both parties because of allegations that he and his top aides covered up the breadth of coronavirus deaths in nursing homes after withholding information about the death tolls, according to news reports.

To restore trust, Ms. Taylor says Mr. Newsom must deliver on vaccines, with experts saying distribution must be both speedy and equitable.

One thing that should help is a friendlier president in Joe Biden. For much of the Trump presidency, the state and the White House warred. But Mr. Newsom went out of his way to avoid criticizing former President Trump on issues related to the virus so he could get into the queue for resources, says Marcia Godwin, a professor in public administration at the University of La Verne. “I’m not sure the public gets the subtleties of how he handled the Trump administration.”

“Nothing … is going to please everyone”

Even with better White House relations, vaccine distribution is bringing into sharp relief the question of who gets priority: those most vulnerable to the virus – many from underserved communities – or teachers, essential workers in health care, and law enforcement?

It is a reprise of last summer’s debate about reopening: What is more important, slowing the spread or getting the economy back on track, including kids in classrooms?

“There are so many different policy objectives that we’re trying to get to, and they are often at odds with each other,” says Jeanne Ringel, director of Rand Corp.’s health care access and delivery program. “Different people have different values that they place on different objectives. It’s really a tough question.”

For governors, she says, it means strong leadership, while being careful to avoid a one-size-fits-all approach.

“Nothing they do is going to please everyone,” she says. That’s why their main role has to be “overarching guidance, leadership, and support – allowing counties the flexibility to implement things that meet the needs of their communities.”