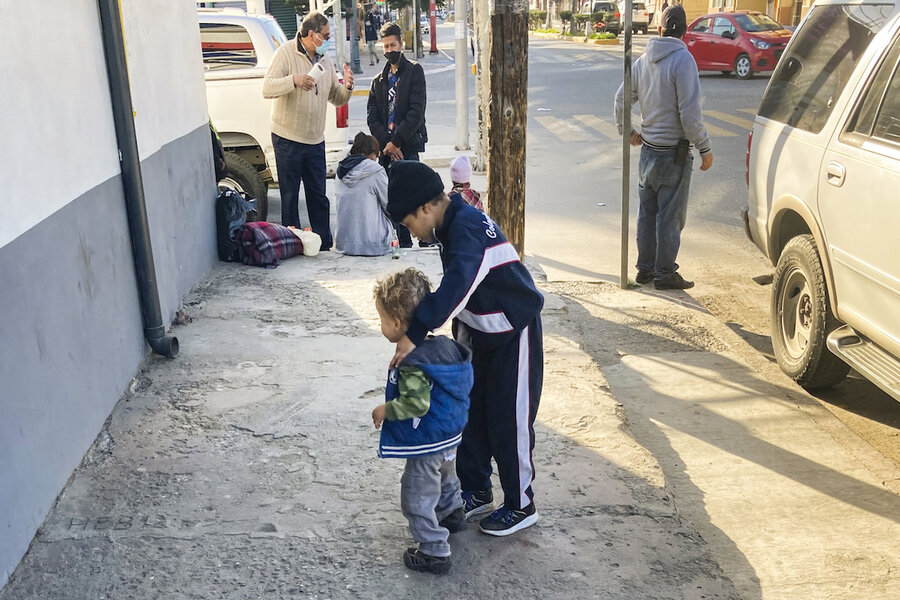 After a weeklong bus ride from Honduras, Isabel Osorio Medina arrived in northern Mexico with the hope President Joe Biden would make it easier for people like him to get into the United States.

“It seems the new president wants to help migrants,” Mr. Osorio said as he got ready to check in to a cheap hotel in downtown Tijuana before heading to the U.S. “They’re saying he is going to help, but I don’t know for sure how much is true or not.”

He is among thousands of people who have come to the U.S.-Mexico border with the hope they will be able to ask for asylum and make their way into the U.S. now that former President Donald Trump is no longer in office.

While Mr. Biden has taken some major steps in his first weeks in office to reverse Mr. Trump’s hardline immigration policies, his administration hasn’t lifted some of the most significant barriers to asylum-seekers.

In fact, it’s discouraging people from coming to the country, hoping to avoid what happened under both Mr. Trump and former President Barack Obama – border agents getting overwhelmed by migrants, including many Central Americans with children.

“Now is not the time to come,” White House press secretary Jen Psaki said at a recent briefing, “and the vast majority of people will be turned away.”

Secretary of State Antony Blinken struck a similar tone on Feb. 6 as he announced official steps to end Trump-era agreements with Honduras, El Salvador, and Guatemala that required many asylum-seekers to seek refuge in one of those countries instead of the U.S.

“To be clear, these actions do not mean that the U.S. border is open,” Mr. Blinken said. “While we are committed to expanding legal pathways for protection and opportunity here and in the region, the United States is a country with borders and laws that must be enforced.”

That message hasn’t reached everyone.

More people have been arriving at an encampment in Matamoros, Mexico, a dangerous city just south of the Texas border where hundreds of asylum-seekers have been waiting under Mr. Trump’s “Remain in Mexico” program.

It’s possible even more may come after the Biden administration announced Friday that it would slowly allow an estimated 25,000 people to enter the U.S. as their cases are reviewed. The first wave is expected Feb. 19.

Walter Valenzuela, from Honduras, said he had been waiting in Tijuana, across the border from San Diego, for months for a chance to either seek asylum or risk an illegal crossing.

For years, asylum-seekers who met the initial threshold of demonstrating a “credible fear” of persecution in their homeland could generally stay in the U.S. until an immigration judge decided whether they qualified for permanent residency, which can take years.

Trump administration officials believed many asylum claims were fraudulent or lacked merit, submitted by people simply looking to remain in the U.S. But the issue is murky as tens of thousands flee violent gangs, natural disasters, and political upheaval.

The Biden administration has signed several executive orders on immigration, including allowing in more refugees and establishing a task force to find the parents of about 600 children who were separated under Mr. Trump and still haven’t been reunited.

But it hasn’t ended a public health order Mr. Trump issued at the start of the coronavirus pandemic that allows U.S. Customs and Border Protection (CBP) to immediately expel nearly everyone, including asylum-seekers.

Ms. Psaki said the government is still working to develop a “humane, comprehensive process” to evaluate people coming to the U.S.

“Asylum processes at the border will not occur immediately,” she said. “It will take time to implement.”

Alan Bersin, who held top positions dealing with border security during the Clinton and Obama administrations, warned that Mr. Biden is headed for a crisis if he releases all asylum-seekers into the United States in the short term.

The number of people apprehended at the border has increased since January, though it’s below some previous periods. Authorities say many are getting caught and returned multiple times.

Complicating matters, a law has taken effect in Mexico that prohibits holding children in migrant detention centers, and the U.S. has stopped sending back some families along parts of the border. CBP, which doesn’t have capacity to hold families because of COVID-19, in recent weeks has released dozens of people into the U.S. with instructions to appear in court later.

Authorities fear that as word spreads of those releases, more people will come. And asylum is not the only immigration issue creating headwinds for Mr. Biden’s administration.

Texas and Arizona have both sued to stop Mr. Biden’s 100-day deportation moratorium, which a judge temporarily put on hold. Immigration and Customs and Enforcement (ICE) officers are complaining about proposed rules to focus on detaining and removing people in the country illegally who pose national security threats or have been convicted of more serious crimes.

Jon Feere, a senior adviser to ICE under Mr. Trump, said such moves are part of a larger pattern that the Biden administration will come to regret.

“When you send the message that you are not serious about immigration enforcement, you can’t act surprised when you see a massive influx of people that you have to manage,” he said.

Raul Ortiz, deputy chief of the Border Patrol, said last week that as a liaison to the Biden transition team, he found the staff to be “very attentive” to the issues. Some had experience with surges of asylum-seekers under Barack Obama.

“This wasn’t uncharted waters,” Mr. Ortiz said in an interview produced by the Border Patrol. “It wasn’t like we were starting from scratch.”

The larger debate is lost on Mr. Osorio, who came to Tijuana because he heard Mr. Biden wants to help people like him. He says he intended to seek asylum based on the dangers he faced as an environmental activist protesting illegal logging in Honduras.

But because he can’t seek asylum at the official border crossing in San Diego, other migrants told him about a place he could try to cross illegally. He said if he encountered the Border Patrol, he would ask for asylum and see what happens.

“They already told us more or less how to do it,” Mr. Osorio said. “We’re going to take a look.”