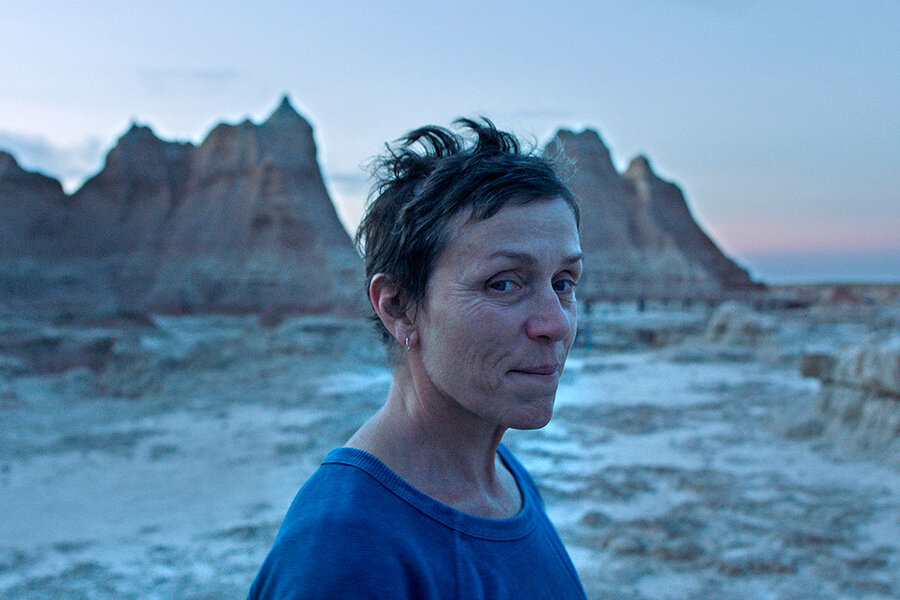 The affecting, uneven “Nomadland,” set early in 2011 in the wake of the Great Recession but equally pertinent today, is a road movie of a very special sort. Fern, played by Frances McDormand, lost her husband a year after the closure of a gypsum factory in Empire, Nevada, that put nearly everybody out of work. Even the ZIP code of the town has been erased. With no desire to stay on, she packs up a camper and heads out across the high and low deserts, working seasonal jobs to get by.

She joins a migratory band of fellow travelers, a few of whom she befriends and reconnects with along the way. Some of these nomads, mostly older adults, choose to live like this because they believe they have no better way to survive. Others just like the peace and freedom.

Written and directed by Chloé Zhao, the film is based on Jessica Bruder’s 2017 nonfiction book “Nomadland: Surviving America in the Twenty-First Century,” and includes several of the book’s real-life vagabonds, such as the ailing, valiant Swankie and the irrepressible Linda May, playing variants of their actual selves. Fern is not based on any one individual, but her singularity, like a character from a Steinbeck novel, makes her seem both her own person and symbolic of a larger reality.

Nothing terribly dramatic happens in “Nomadland,” and at times this can make the film seem wispy and digressive – a piece of arty anomie with a semidocumentary overlay. The challenges of maintaining life’s basic necessities are downplayed. Fern faces few dangers: no hazardous encounters, no thefts, no violence. This seems more an idealization of her situation than a reality. Her biggest crisis comes when her camper breaks down and she cadges money for its repair from her sister Dolly (Melissa Smith), who lives with her husband and children outside Denver in conventional, and, in the film’s view, boring, middle-class comfort.

Fern reluctantly pays her a visit, and it is in this scene, more than halfway into the movie, that a bit of Fern’s family backstory unfolds. She left home as soon as she could, married hastily, and moved, according to Dolly, to “the middle of nowhere.” Not altogether convincingly, Dolly commends the “pioneer spirit” of the big sister she looked up to, whose departure years ago left a big hole in her life.

It is also in this Denver setting that the film tips its ideological hand, just as it did earlier when the real-life nomad guru, Bob Wells, regales his followers with talk of the “tyranny of the dollar.” Fern chastises Dolly’s husband, George (Warren Keith), a real estate broker, for encouraging people “to invest their whole life savings, go into debt, just to buy a house they can’t afford.” The implication is clear: Footloose Fern incarnates the spirit that made America great, a spirit that has been squelched in a mercenary economy gone bust. “I’m not homeless,” she tells people. “I’m houseless.”

Romanticizing Fern in this way glosses over her emotional complexity. Despite the film’s erratic attempt to pigeonhole her, it’s obvious that Fern’s wanderlust owes far more to psychological need than ideological persuasion. She quietly affirms several times a lasting love for her late husband, but the affirmation seemingly lacks conviction. When a fellow nomad, beautifully played by David Strathairn, attempts to get close to her, she barely registers the overture. As was also true of the vengeful mother McDormand played in “Three Billboards Outside Ebbing, Missouri,” the role of Fern gives McDormand license to indulge an opaqueness that is often more gnomic than expressive. Perhaps she and Zhao felt that being more demonstrative would shatter the film’s wayward poetic mood.

They needn’t have worried because, despite the movie’s manipulations, that mood often comes through anyway. It’s there in the scenes where Fern is simply walking alone in a deserted RV park, or floating unclothed and unobserved in a mountain stream, or just watching a herd of bison from the window of her camper. In these moments, and others like them, “Nomadland” is mysteriously moving.

Peter Rainer is the Monitor’s film critic. “Nomadland” is available via theaters and streaming service Hulu on Feb. 19.

In ‘The Mauritanian,’ Hollywood takes on Guantánamo. Can it do it justice?

Learning to live with ‘learnings’