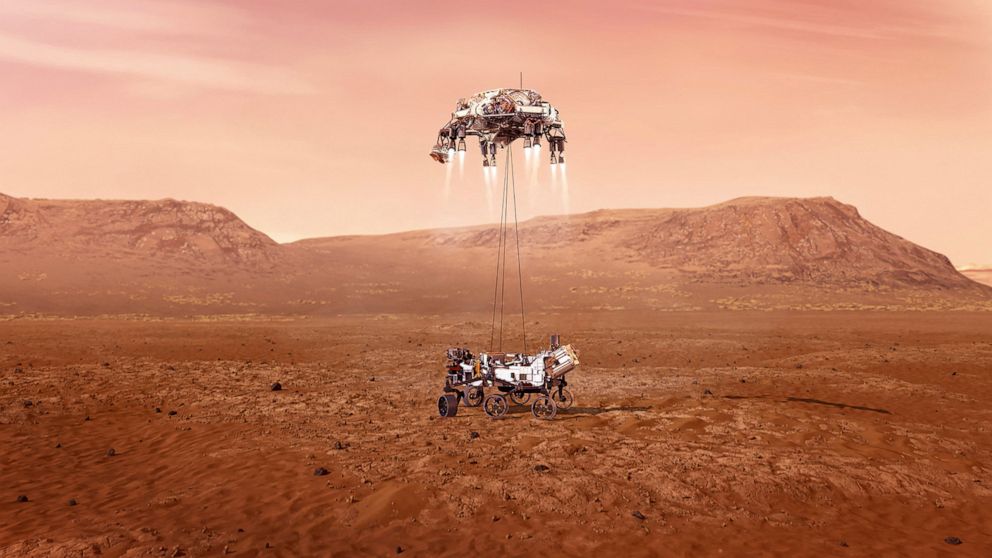 NASA is expected to land its Perseverance rover on Mars this Thursday, as part of one of the agency’s most ambitious deep-space missions to search for signs of ancient life on the red planet.

The rover’s voyage will also help pave the way for future human exploration of Mars.

Perseverance launched from the Florida coast last July, and after a seven-month journey through the cosmos, is scheduled to touch down on Mars’ Jezero Crater at 3:55 p.m. ET on Thursday.

The rover’s entry, descent and landing on Mars will broadcast live on NASA’s website and YouTube channel, with coverage commencing at 2:15 p.m. ET. Special Spanish language programming — a first from NASA for a planetary landing — will begin at 2:30 p.m. ET.

It takes a little over 11 minutes for signals to travel from Mars to Earth, so the “live” coverage will have a delay. The riskiest portion of the mission, when the rover begins its entry on Mars (dubbed the “seven minutes of terror,” according to NASA engineers), is expected to begin at around 3:38 p.m. ET.

The complexities of deep-space communications could delay when mission controllers on earth confirm parts of Perseverance’s landing, NASA said, but also noted that the rover has the ability to land safely without communications to Earth using autonomous, pre-programmed landing instructions. Additional communications, expected in the hours and days after the landing event, should provide more details on how the rover fared.

“Mars is hard and we never take success for granted,” Thomas Zurbuchen, the associate administrator for the Science Mission Directorate at NASA, said during a Tuesday news conference.

Zurbuchen added that they will land on Mars “with cameras on, so the entire world is inspired with us as we do new and tough things and demonstrate these new technologies.”

“Because whether it’s on the red planet or here at home on our blue marble, science can bring us together and create solutions to challenges that seem impossible at first,” Zurbuchen said.

Thursday’s landing is the culmination of over a decade of work, but there is still no guarantee the landing will go smoothly — only about 50% of all previous Mars landing attempts have succeeded, according to NASA.

Zurbuchen said in a statement that Peseverance is “focused scientifically on finding out whether there was ever any life on Mars in the past.”

“To answer this question, the landing team will have its hands full getting us to Jezero Crater — the most challenging Martian terrain ever targeted for a landing,” he added.

The Jezero Crater is the site where an ancient river flowed into a lake on Mars, scientists believe, and where signs of ancient life may have been best preserved.

“The Perseverance team is putting the final touches on the complex choreography required to land in Jezero Crater,” Jennifer Trosper, the deputy project manager for the mission at NASA’s Jet Propulsion Laboratory, said in a statement. “No Mars landing is guaranteed, but we have been preparing a decade to put this rover’s wheels down on the surface of Mars and get to work.”

The rover is also equipped with new technology that lets it target its landing site more accurately and avoid hazards autonomously, according to NASA.

Perseverance — which was named by a seventh grader who won an essay contest — is the fifth rover NASA has sent to the red planet, and the most advanced.

The six-wheeled rover is about the size of a car and the mission duration as of now is set for at least one Martian year, or 687 Earth days.

Astrobiology is at the core of the mission’s goals, and Perseverance is tasked with searching for signs of ancient microbial life on Mars. It will also collect carefully selected rock and sediment samples with the goal of eventually returning them to Earth.

Moreover, the rover will collect data on the planet’s geology and climate — paving the way for eventual human exploration. There is also an experiment called MOXIE that will see whether it is possible to manufacture oxygen out of the methane in the Mars atmosphere.

Perseverance also has a helicopter, dubbed “Ingenuity,” that is expected to become the first aircraft to attempt a powered, controlled flight on another planet.