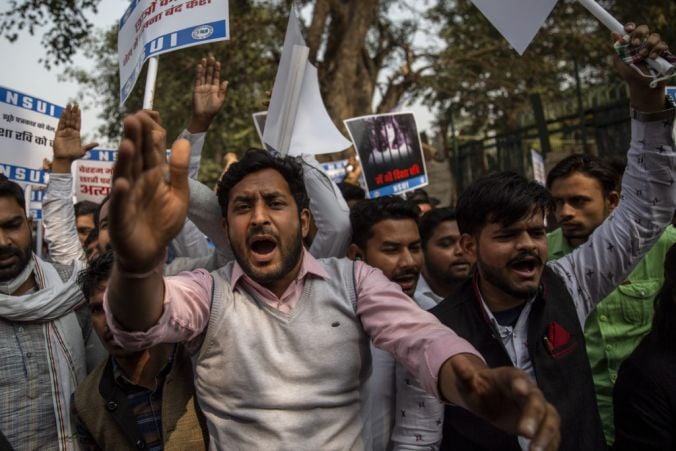 Police in India have detained around a dozen student protesters who were trying to march to the parliament building in New Delhi to demand the release of a climate activist.

Disha Ravi, 22, had been arrested for circulating a document on social media supporting months of protests by farmers.

The protesters shouted “Free Disha Ravi” and “Shame on prime minister Modi and home minister Amit Shah” as they tried to break police barricades outside the office of the National Students’ Union of India (NSUI), a student wing of the main opposition Congress party.

A heavy police presence overpowered about 40 protesters, including a dozen who were taken away in a bus.

It was not known whether the police were going to formally arrest them or free them later on Wednesday.

NSUI president Neeraj Kundan told reporters that the protest was against the government misusing a sedition law and arresting activists expressing support for the farmers.

They say the sharing of the document on social media indicated there was a “conspiracy” behind violence on January 26, India’s Republic Day, when the largely peaceful farmer protests erupted into clashes with police.

One protester died and hundreds of police and demonstrators were injured.

A group of students from New Delhi’s prestigious Jawaharlal Nehru University held a similar protest in the Indian capital on Tuesday.

Prasenjit, a student leader who uses one name, demanded the release of Ms Ravi and dozens of protesting farmers arrested by New Delhi police.

Opposition parties called the arrests harassment, intimidation and an attack on democracy.

Overseas, the niece of US vice president Kamala Harris, Meena Harris, criticised the government on Twitter for silencing activists.

Since November, tens of thousands of farmers have camped outside New Delhi and blocked highways to protest against new agricultural reform laws they say will devastate their incomes.

The protests have posed a major challenge to prime minister Narendra Modi’s Hindu nationalist-led government, which says the laws are needed to modernise Indian farming.