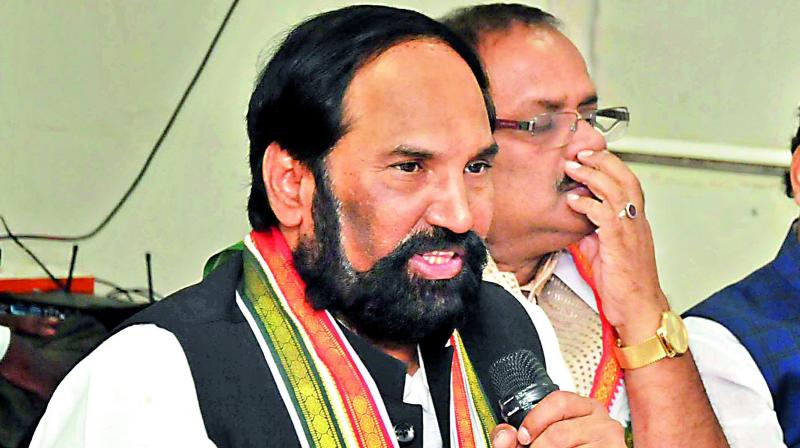 Mr Reddy said the TRS party was conspiring to reduce the political representations of OBCs, on the occasion of Mettu Sai Kumar taking charge as the chairman of the Telangana Fishermen Congress at Gandhi Bhavan.

Stating that the Congress party always gave highest priority to the development of BCs, Mr Reddy said that only Congress could ensure social justice. He said that the TRS government did nothing for the welfare of fishermen, adding that fishermen have almost nil representation in elected bodies and remained one of the most neglected communities.

“KCR has been targeting BC communities after coming to power. Chief Minister promised to spend Rs 10,000 crore for welfare of BCs but the promise remained unfulfilled. The TRS government is either slashing allocations or does not release allocated funds for BC welfare. Congress condemns the CM for not accepting the demand for introducing BC sub-plan for focussed development of backwards,” he said.

The Congress leader further said that CM Chandrashekar Rao was conspiring to reduce representation of BCs in law-making and other local bodies. Citing an example, he said that the TRS reduced reservation for BCs in Panchayat Raj elections to 23 per cent, with a desire to crush BCs politically. In contrast, he said, Congress governments had implemented 34 per cent reservation for BCs in Panchayat Raj and other local bodies for over 30 years.

Uttam Reddy said the Telangana Reservation Bill (Backward classes, SC& ST Reservation Bill, 2017) to enhance existing reservations to Muslim BCs from four per cent to 12 per cent and ST from six per cent to 10 per cent was passed in the Assembly and Council. The Congress supported the Bill with the hope that it would be implemented.

“However, the TRS has stashed the Bill away in cold storage. TRS was neither talking about it nor enhancing quota for BCs, SCs and STs. Instead, KCR is exploring new ways to suppress the BCs,” he said.

Mr Reddy also strongly condemned the continuous increase in prices of petrol and diesel. He said the Modi government had promised to reduce inflation within 100 days after coming to power, but has instead been adding burden on common people. Similarly, he said that the prices of non-subsidised LPG cylinders have also been increased.

Reiterating that both TRS and BJP are two sides of the same coin, he said that people should teach both parties a fitting lesson in forthcoming MLC elections and Nagarjuna Sagar by-elections.

He said that both Modi and KCR had cheated unemployed youth and failed to create new jobs for them. Instead, their faulty policies have led to loss of crores of existing jobs. Further, the TRS did not fulfil its promise of giving an unemployment allowance of Rs 3,016 per month to jobless youth.