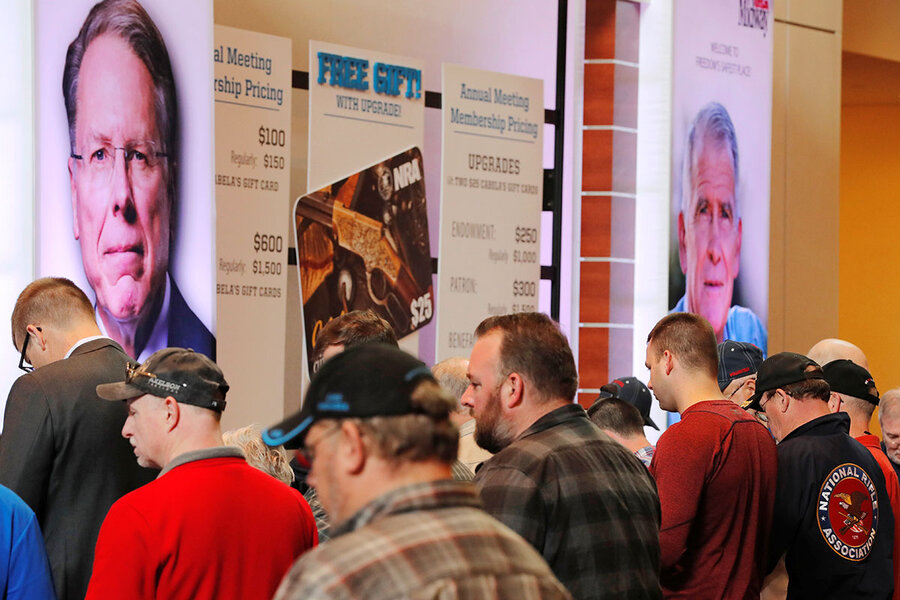 Even amid litigation, investigation, and the threat of dissolution, the NRA’s gravest threat may be estranged members like Mr. Chapdelain.

From a small shooting sports group to one of the nation’s most powerful lobbying outfits, the association rose to power through its enormous grassroots base. As the politics of gun control changed, the NRA maintained its influence by representing something beyond the Second Amendment. To many, it became a symbol of freedom – a David forever fighting their political Goliaths.

But then the NRA itself became Goliath. In the past four years, a saga of lawsuits, scandals, and most recently bankruptcy filing, has painted the association as insular and self-interested. Even if it survives, says Adam Winkler, a gun rights expert at the University of California at Los Angeles School of Law, it has lost the faith of many in the gun rights community, who feel abandoned by their once saving grace. It is a parable of how even the mightiest organizations can be taken down by a betrayal of trust.

“The NRA survived all of these years as the political winds have changed [and] the issues in the gun debate have changed,” says Professor Winkler. Now, “the NRA is definitely suffering from the hubris that comes with success.”

In the 150 years since its founding, success for the NRA has largely meant loyalty.

“The NRA has worked for decades to cultivate and enlarge, to the extent they could, a very strong, loyal, and vociferous grassroots base all around the country,” says Robert Spitzer, a political scientist and expert on gun politics at the State University of New York, Cortland. “That really has been the key to the NRA’s strength and durability compared to other groups.”

Developing such a large base – today around five million members – requires attending to its goals, and historically the NRA has done just that. After more than a century focused on accuracy and outdoorsmanship, the organization reoriented its mission toward gun rights advocacy in the late 1970s, when a new generation of members demanded it enter politics.

In the decades since, says Professor Spitzer, it’s earned a near-monopoly on the gun lobby by prioritizing its political work and adopting an aggressive, uncompromising posture. As gun control laws grew more popular and gun owners grew more anxious, the NRA styled itself as a defender of freedom for salt-of-the-earth Americans.

That message crescendoed in 2016, when the NRA’s enormous campaign spending helped sow Republican power in Washington.

“They conquered the worlds that they had declared were important,” says Rich Feldman, a former NRA lobbyist and firearms advocate.

But when left without a foil, the NRA began to splinter.

Starting in 2017 a four-year harvest of scandals, allegations of graft and self-dealing among leadership, and damaging litigation has threatened the crucial bond between members and management.

“You claim to represent these very middle-class, working-class folks who are scraping by … and then you’re out there chartering private planes and living the life of a multimillionaire,” says Mr. Feldman. “It’s the reality versus the illusion.”

For the Rev. Kenn Blanchard, host of the podcast “Black Man with a Gun,” that illusion faded long ago, as he worked with the NRA in the 1990s. At first excited to lobby and advertise with the organization, Mr. Blanchard says he grew disenchanted with the NRA’s “insatiable” political wing and elitist management.

Yet Mr. Blanchard is still an NRA life member, and plans to remain one. The NRA still has deep roots in America’s gun culture, he says, and four years in the wilderness won’t change that. Many states require an NRA certification to become a firearms instructor. The group’s endorsement still matters come November.

“Everything that’s in the gun world is touched by them,” says Mr. Blanchard.

That includes other gun rights groups.

The NRA has long been a lightning rod in the firearms community, allowing other advocacy groups to operate with less scrutiny, says Alan Gottlieb, founder of the Second Amendment Foundation. Disaffected NRA members can join other, less embattled groups. But that time of shelter may be over.

“Obviously, it’s not good for the firearms rights community to have the NRA filing bankruptcy,” says Mr. Gottlieb. “Of course, most of us in various groups around the country are trying to pick up the slack as quickly as we can.”

Last week, New York’s attorney general asked a judge to dismiss the bankruptcy filing, saying the NRA was trying to evade oversight. A lawyer for the NRA called it “another transparent move in a partisan crusade to shut down the NRA,” and added, “it welcomes the opportunity to litigate these contrived claims and the motives which led to their filing.”

NRA members are then left with a choice: take their advocacy elsewhere or, as Mr. Blanchard says, “hope this too shall pass.”

Dave Dell’aquila, a life member in Nashville, Tennessee, made his choice years ago after watching management waste the money of too many trusting blue-collar Americans. Mr. Dell’aquila plans to leave the NRA but only after “making it accountable to the members” through internal reform.

Most recently, that’s involved filing challenges to the NRA’s bankruptcy – seeking to stop improper debts from being annulled and to appoint an independent trustee to take control of its finances.

The organization’s recent missteps, experts say, come from a lack of internal guardrails. If the NRA wants to earn back the trust of its estranged members, accountability may be the place to start.

Scott Gray, a heating and air technician in Nashville, became a member at the height of his interest in firearms, back in his days visiting gun shows each year and never missing an NRA tent.

Ten years later, in the early 2000s, he cancelled that membership, after increasingly feeling like the NRA was an ineffective advocate. To him, the organization seemed like it was distracted, and he felt ignored. If Congress could pass an assault rifle ban, he says, then the NRA wasn’t spending his money wisely.

But even though Mr. Gray isn’t as involved in the gun community as he once was, he has an open mind – as do the other gun owners he knows.

“Some people feel like the bankruptcy would be the best thing for them,” says Mr. Gray. “That way they would restructure and go back to their roots and not their lush lifestyles and asking for donations.”

To him, that means refocusing on members’ rights, and being the attentive “guard dog” the NRA was always meant to be.