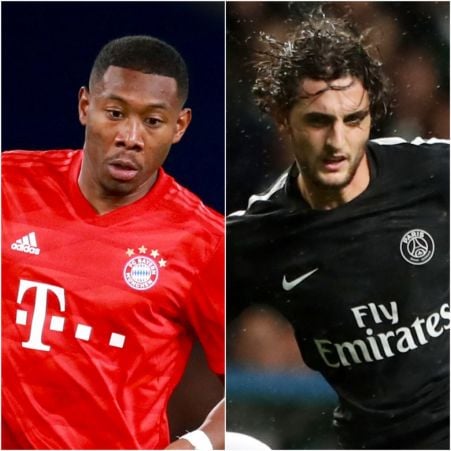 Everton are lining up another move for Adrien Rabiot over the summer, reports the Daily Mail. The Toffees were linked with a deal last summer and Carlo Ancelotti is keen on the 25-year-old midfielder who is currently on the books of Juventus, and will make an offer worth £26million.

David Alaba will be leaving Bayern Munich at the end of the season, but there is still a question mark over his next destination. The Daily Mirror says the 28-year-old is keen on signing for Real Madrid, but doubts about whether Sergio Ramos will stick with the LaLiga side have put the move in doubt.

Sticking with Real Madrid, and Manchester United are said to be keen on their 22-year-old midfielder Federico Valverde, says the Sun.

Moving towards the managerial merry-go-round, and potential replacements for Jose Mourinho at Tottenham are already being lined up according to the Daily Mail. The paper says Leicester’s Brendan Rodgers is among the candidates as well as RB Leipzig boss Julian Nagelsmann.

Joey Barton could be returning to management soon, with Bristol Rovers keen on the former Newcastle and Manchester City footballer, writes the Daily Mail. Barton left Fleetwood last month while Rovers are looking for a replacement for Paul Tisdale who was sacked last week.

Erling Braut Haaland: Manchester United are said to be making a move for the 20-year-old a priority in the summer, writes the Daily Express.

David Luiz: The 33-year-old will only be offered a contract extension if he accepts reduced playing time at the Emirates and a coaching role, according to Football.London.

David Carmo: The Braga centre-back, who was subject of interest from Liverpool, is wanted by Real Madrid, says AS.