was left in a muddle after the Chancellor waylaid her face covering following a speech to the German Parliament. Captured on film, the momentary loss of concentration saw the German leader forced into an awkward dash back to the podium to retrieve the mask. The howler seemed to throw Ms Merkel but after a couple of seconds of unease, the Chancellor seemed able to laugh off her error.

The blunder is not the first to befall the CDU leader.

Last year Ms Merkel made an awkward gaffe as she discussed with Queen Máxima of the Netherlands meetings they had shared while attending the annual United Nations (UN) General Assembly in New York.

As the Dutch sovereign discussed her talks with France, the German Chancellor interrupted to ask “which Franz” Her Majesty was referring to.

After a couple of seconds of unease, Queen Máxima brushed over the misunderstanding as she explained she had recently met with French Finance Minister Bruno Le Maire and Emmanuel Macron 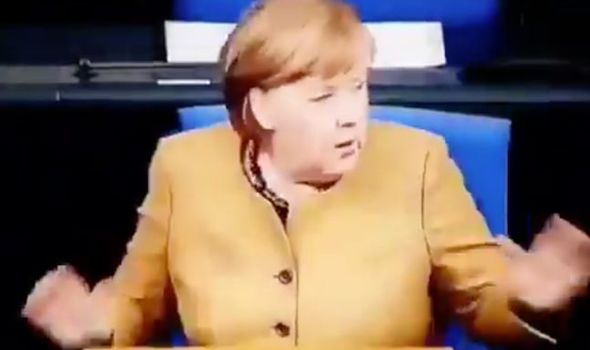 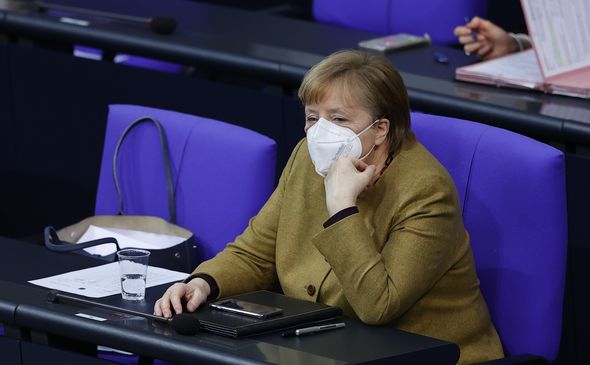 This recent slip comes as the German Chancellor faces renewed pressure over her decision to extend the country’s coronavirus lockdown measures.

Ms Merkel’s Government and German states have currently implemented a coronavirus lockdown until at least March 7, with all shops and non-essential businesses closed.

The Chancellor agreed on Friday restrictions may not be lifted until cases are less than 35 per 100,000 people, which is well below the German Government’s previous target of 50 per 100,000.

Peter Altmaier, economy minister, also suggested businesses may need to wait even longer to open should restrictions be lifted, warning “business can’t flourish if we get a third wave”.

It follows a small protest outside the German economy ministry in Berlin over businesses struggles in lockdown on Tuesday.

He said: “It’s the lack of a prospect of an opening that’s for sure, especially in the light of the frustratingly low vaccination progress.”

Citing frustration at “very slow” financial aid, he added: “For instance, much of the November help hasn’t been paid until early January so of course for businesses that are running low on cash, have no liquidity coming in because their business is closed, that is a big deal.”

Ms Merkel announced €10 billion would be offered to businesses affected by lockdown restrictions in November, but firms reported issues accessing the funds throughout the winter.

Germany recorded 9,598 cases and 538 deaths within 28 days of a positive coronavirus test yesterday.