Greetings, Samodelkins!
This time we will take a closer look at the process of assembling a module – a controller for turning on daytime running lights or, in short, a DRL controller. 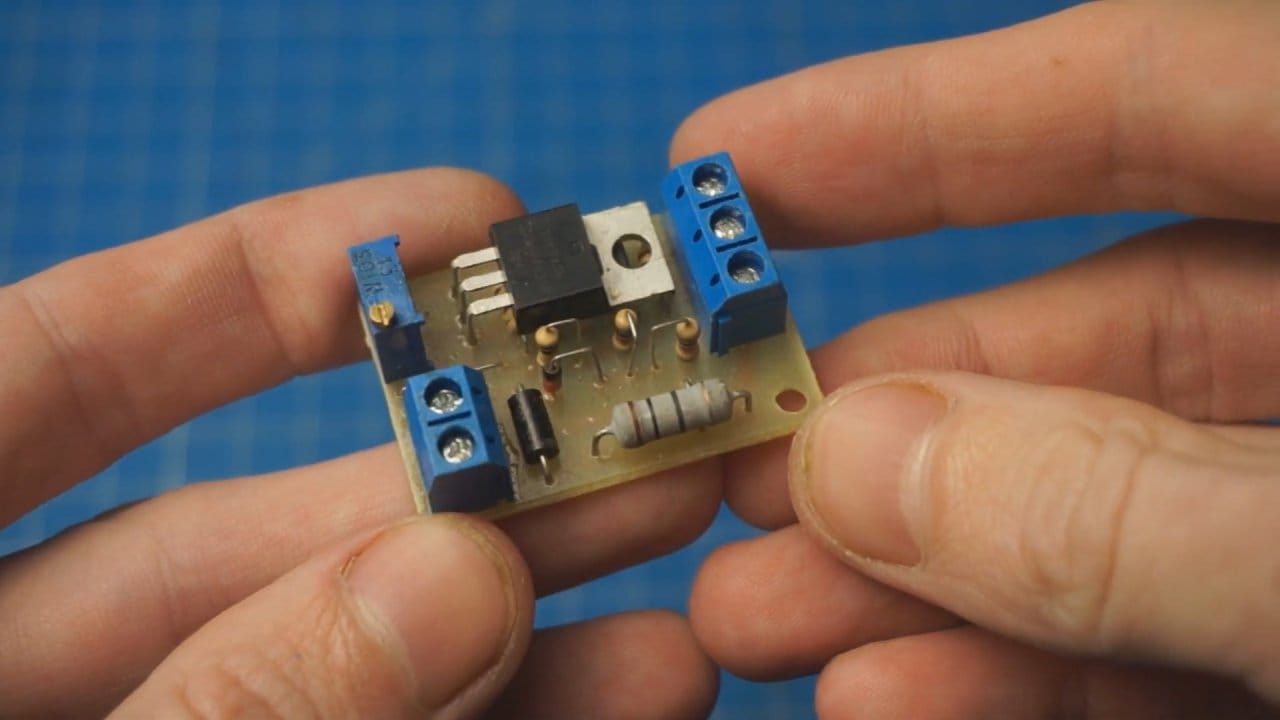 Further instructions are taken from the YouTube channel” Radio-Lab “.
Co diagram of the future controller DRL can be found below:
This scheme was found by the author on the Internet, and, as you can see, it is quite simple.
The author has drawn a printed circuit board especially for this project. It turned out to be quite compact. You can download the necessary files by THIS link.
The author decided not to poison the boards himself, but simply ordered them in China. After some time, the package with the boards was delivered to the addressee.
As you can see, the board is of excellent quality with a mask and silkscreen. The quality is very good, as it was done in the drawing. But to save money, the author drew several boards on one plate. Thus, we received three times more boards for the same price.
Of course, you will have to cut the boards yourself, but if you, like the author of this project, have a mini circular saw with a diamond disc, then this will not be done special problems.
As a result, with the help of such a device, it was possible to quickly cope with the task. This is how a small board of the future DRL controller looks like:
There is a printed circuit board, now you can install radio components on it. The necessary radio parts (there are few of them) can be purchased at the radio market or on the Internet.
Then everything is in accordance with the diagram, you need to solder the parts to the printed circuit board. The ratings of the parts are on the diagram, and what and where to solder is drawn on the board itself.
First of all, it is easier to install constant 0.25W resistors.
By measurement, this resistor has a resistance of 1kOhm, install it in its place.
The first resistor is installed, the rest of the resistors are installed in the same way.
Next, you need to set the zener diode to 5.1V. There is a cathode mark on the Zener diode case and on the board.
There are two jumpers on the board, you can make them yourself from scraps of radio components legs.
Next, set a 10 Ohm 1W resistor.
Next came the turn of the microcircuit.
The LM258Nm microcircuit is an operational amplifier that can work normally in a wide temperature range and at sub-zero temperatures too. The microcircuit must be installed strictly according to the key on the microcircuit case and on the board.
Next, we take a protective unidirectional diode. This component provides overvoltage protection. It must be installed according to the cathode mark on the body and on the board. 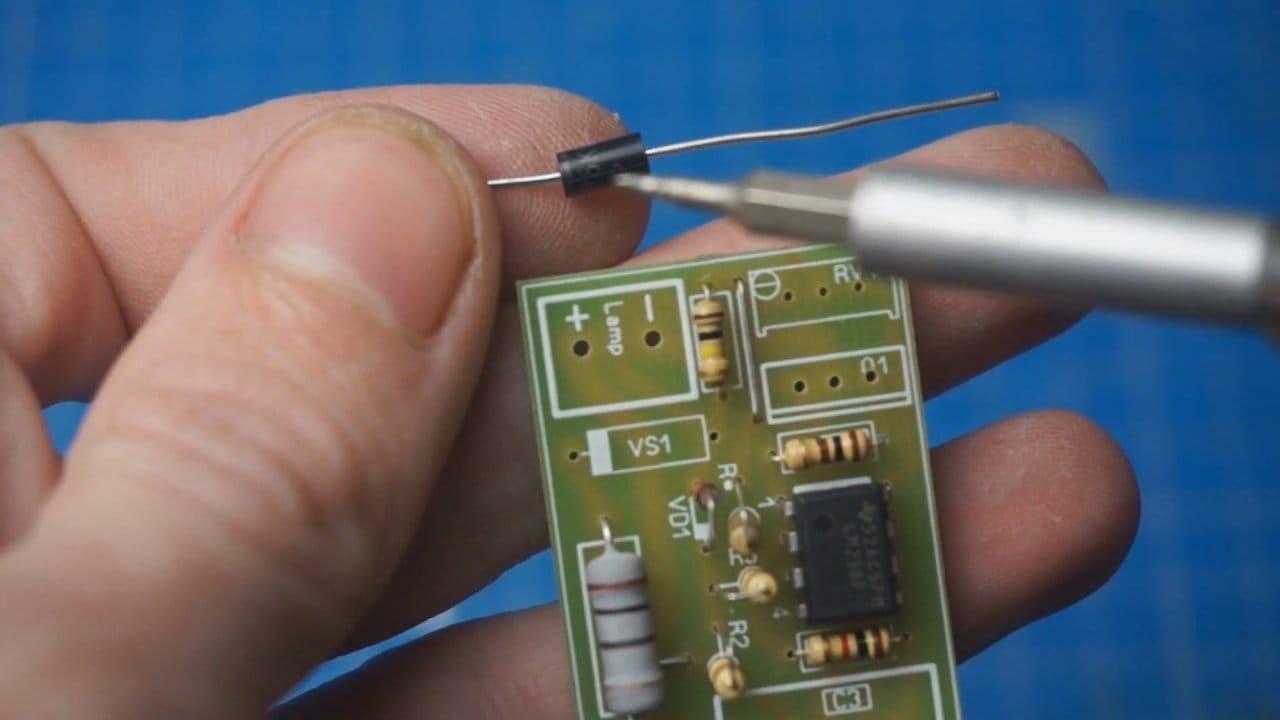 N-channel field-effect transistor IRF540N is responsible for load control.
The transistor should be installed with the back wall closer to the microcircuit. For compactness, the author bent the legs of the transistor and installed it in its place.
In the process of operation, the transistor does not heat up and in this case there is no need for a radiator.
Now we install the multi-turn trimmer resistor in place.
Next, we solder the screw terminal blocks to the board.
The DRL controller is almost ready, it remains to install 3 non-polar SMD capacitors at 0.1 μF on the board. But if there are none, then you can solder the usual multilayer ones, this will not affect the operation of the circuit, it will just be less compact.
The capacitors are installed, the power tracks are additionally reinforced with solder, after which we wash the board from the rosin.
Now the DRL module is assembled. Externally, the assembled module looks like a factory one.
Now let's connect the assembled module and test it for performance. As daytime running lights for the test, there will be such a 12V LED strip.
This DRL module can work with a battery with a voltage of 12V and a load current of up to 10A. The connection diagram looks like this:
For convenience, and so as not to confuse anything, the author has marked the terminal blocks on the DRL module.
Preliminarily, it is advisable to configure the response threshold of the DRL module. To quickly configure the DRL module, you will need a power supply with output voltage regulation. A laboratory power supply is perfect for this purpose. In principle, this DRL module can be configured without a laboratory power supply, but you have to run around with a screwdriver and start or stop the engine.
We set the voltage at the output of the converter to 13.5V and slightly raise the current so that there is no current limitation. Further, observing the polarity, we connect the LED strip, and then we connect the assembled DRL module to the output of the configured converter, also remembering to observe the polarity.
As you can see, the LED strip lit up, now you need to configure the DRL module. By rotating the trimmer, we make the LED strip go out. Then you need to rotate the trimmer in the other direction so that the LED strip lights up, and as soon as the LED strip lights up, you need to additionally scroll the trimmer resistor a little more so that the tape lights up clearly, but you don't need to twist a lot, just a quarter of a turn is enough.
That's all, the configuration of the DRL module is completed, the device is ready for use. The principle of operation of this DRL module is very simple: the DRL controller is connected to the car battery terminals and monitors the battery voltage. And if the engine is running and the generator is running, then the battery voltage will be higher and the daytime running lights will be on. If the engine is off, the battery voltage will be lower and the daytime running lights will be off.
When the voltage rises above 13.5V, the operation of the generator is simulated and the LED strip lights up – the daytime running lights are on, and when the voltage drops below 13.5V, it is simulated that the engine is turned off and the LED strip is off – the daytime running lights are off.
When the dimensions are turned on, the daytime running lights will turn off.
As you can see, if you close the plus (+) of the power supply to the contact for the plus (+) of the dimensions, then the LED strip turns off immediately.
If you look at the assembled device through a thermal imager, you can see the following picture:
As you can see, there are no overheating on the assembled DRL module. This DRL module is simple and the principle of operation here is not the best, but simple – it is based on measuring the voltage of the car battery. The LED strip is controlled by a minus, the minus of the power supply is broken using a transistor. 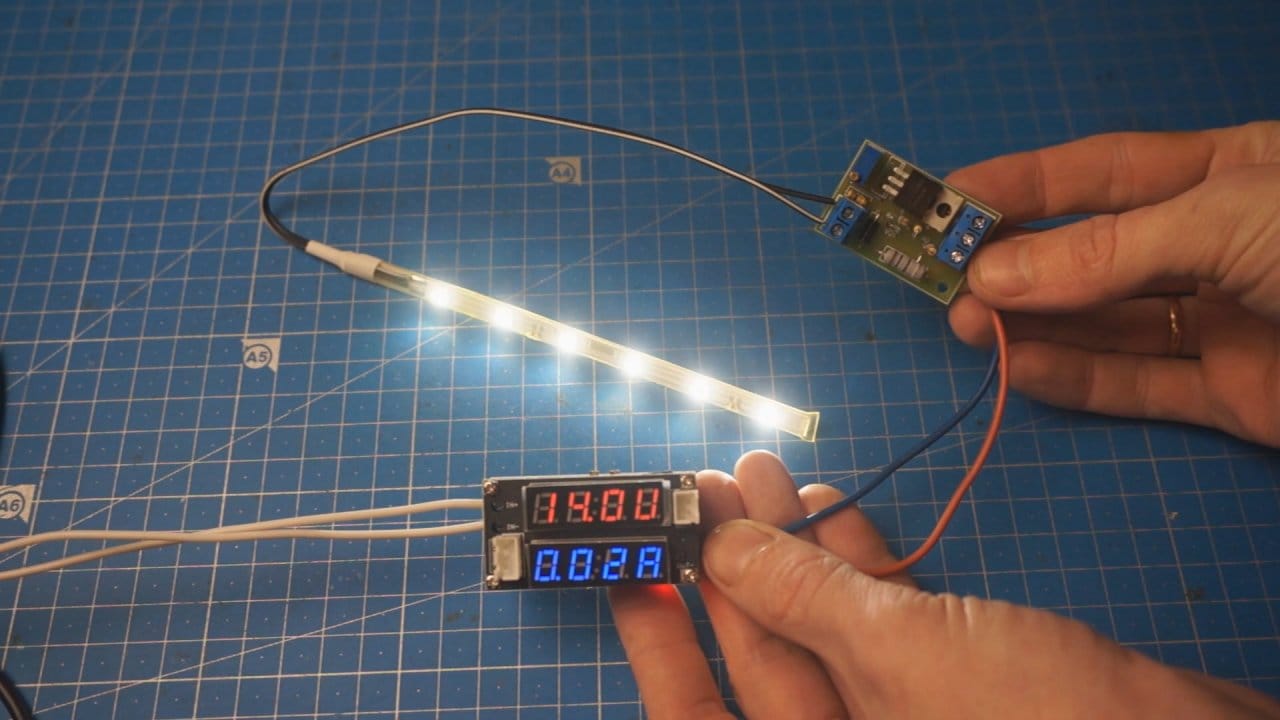 Also, when installing the module in a car, it is necessary to ensure the tightness of the device, to make sure that no water gets on it. The connection is very simple. On the DRL board, you need to connect plus (+) and minus (-) from the battery, plus (+) from the dimensions, and already from the output of the DRL board to daytime running lights.
This is such a simple and fully working DRL module. Of course, there are better and more complex DRL modules, with work from an oil pressure sensor, etc., but that's another story. And that's all, thank you for your attention, see you soon!
Author's video: