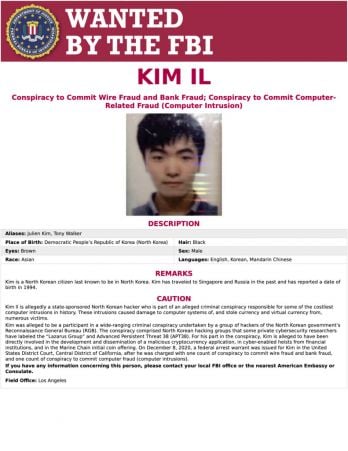 A wanted poster released by the US Department of Justice, © AP/Press Association Images

The US Justice Department has charged three North Korean computer programmers in a broad range of global hacks.

Federal prosecutors said the hacks include an attack targeting an American movie studio and an extortion scheme aimed at attempting to steal more than 1.3 billion US dollars from banks and other financial institutions.

Prosecutors identified all three as members of a North Korean military intelligence agency and said they carried out hacks at the behest of the government with a goal of using stolen funds for the benefit of the regime. Alarmingly to US officials, the defendants worked at times from locations in Russia and China.

Law enforcement officials say the prosecution underscores the profit-driven motive behind the North Korean criminal hacking model, a contrast from other adversarial nations like Russia, China and Iran who are generally more interested in espionage, intellectual property theft or even disrupting democracy.

As the US announced its case against the North Koreans, the government was still grappling with an intrusion by Russia of federal agencies and private corporations that officials say was aimed at information-gathering.

“What we see emerging uniquely out of North Korea is trying to raise funds through illegal cyber activities,” including the theft of traditional and cryptocurrency, as well as cyber extortion schemes, said assistant attorney general John Demers, the Justice Department’s top national security official.

Because of their economic system and sanctions imposed on the country, he added: “They use their cyber capabilities to try to get currency wherever they can do that, and that’s not something that we really see from actors in China or Russia or in Iran.”

None of the three defendants is in American custody, and though officials do not expect them to travel to the US for prosecution, Justice Department officials have, in recent years, found value in indicting foreign government hackers even in absentia as a message that they are not anonymous and can be identified and implicated in crimes.