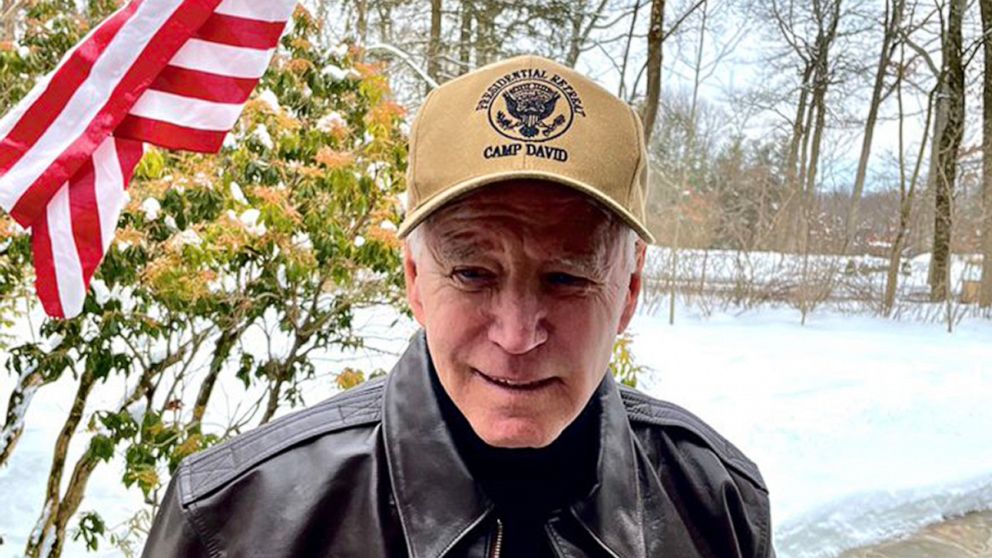 Before leaving Friday, the president told reporters that he and his family were going to “hang out” and “do what they always do.”

Biden’s granddaughter Naomi Biden posted photos on social media of her grandfather in what she called “swag” the family got for him since he’s now “literally” president on Presidents Day weekend, including a khaki baseball cap with the Camp David insignia on the front.

The cap said “Pop” on the back, which she joked was to “make sure the job title doesn’t get to his head.”

She also posted pictures of Biden and his grandchildren playing Mario Kart in what looked like a small arcade, adding that he was “a little rusty but he still won (barely).”

She captioned it “Secret service made the exception and let him drive himself.”

This was Biden’s first trip to Camp David as president.

Complete with everything from an archery range to a bowling alley, it’s been used as a presidential retreat for decades, but it’s also where President Jimmy Carter negotiated the peace deal between Israel and Egypt in 1978.

Biden and his family returned to Washington on Monday afternoon. Naomi Biden, her boyfriend Peter Neal and Naomi’s dog, Charlie, were all aboard Air Force One. On the tarmac at Joint Base Andrews, Charlie Biden leapt up into the president’s seat in the motorcade.