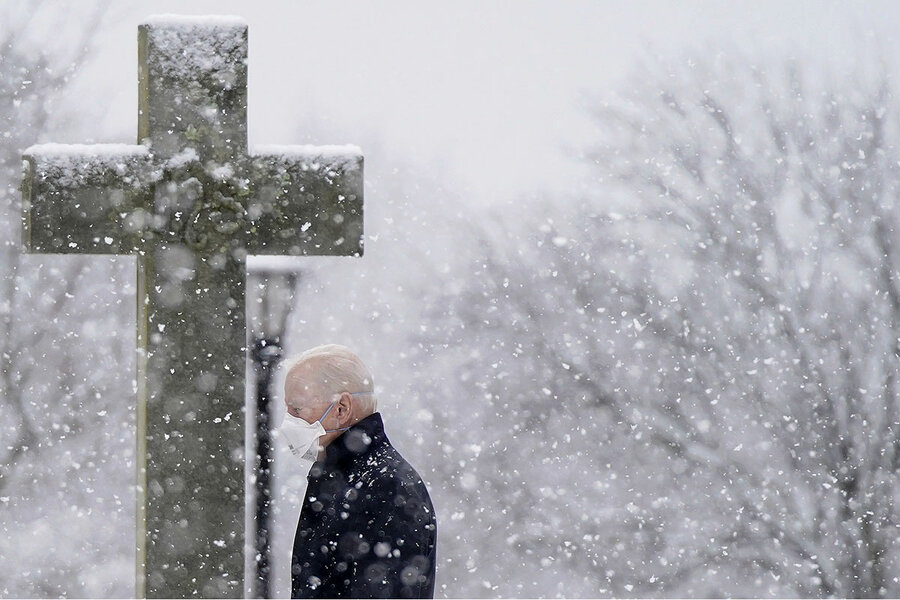 When Mat Schmalz was coming of age in western Massachusetts decades ago, he took a year to volunteer for a Roman Catholic order in rural Oklahoma, helping to minister to some of the region’s poorer and more isolated communities.

It was the first time he spent a significant amount of time away from the rhythms of his Catholic upbringing, and at first he felt a bit unmoored. But then it almost came as a surprise as he grew particularly close to a family of Jehovah’s Witnesses, or when he started forming deep friendships with evangelical Protestants, including those from charismatic and Pentecostal traditions.

“I mean, in one sense it was liberating,” says Mr. Schmalz, now a professor of religious studies at College of the Holy Cross in Worcester, Massachusetts, which he calls “the heart of the Catholic left.”

“Those experiences gave me a sense then, and then throughout my life, that people who I would consider ‘other’ could teach me something spiritually.”

Such openness to other traditions, and even other forms of faith, have long characterized some of the more liberal expressions of American Christianity. Along with an emphasis on the Social Gospel, which highlights the earthly ministries of Jesus and his commitment to the poor and oppressed, these traditions helped ground his Christian faith over the years, Mr. Schmalz says.

Even so, for nearly a half-century liberal Christianity has endured a steady decline. Often in tension with certain Christian teachings and their exclusive claims to truth, its openness may have in fact cut away the distinctiveness of traditional faith, some historians contend. As a cultural and political force, too, its influence has waned since the 1960s, even as conservative congregations around the country were growing and flourishing.

But the remnants of these once-powerful Christian traditions have in many ways sparked back to life over the past few years.

A progressive coalition of religious liberals, spearheaded especially by Black Protestant churches, has reemerged as a political force in Democratic politics, disrupting what had long been the party’s more secular ethos.

“It does seem to me that there has been this resurgence of people who interpret their Christian beliefs as a call to action on behalf of the most vulnerable,” says Margaret McGuinness, professor of religion and theology at La Salle University in Philadelphia. “And then, all of a sudden, here comes President Joe Biden, who wears his Catholic faith on his sleeve – and I mean that in a good way, in a way that a lot of people are noticing.”

Only the second Roman Catholic to hold the nation’s highest office, President Biden has been one of the most pious and faithfully observant Christians in decades, many observers say, peppering his speeches with more than the kind of general religious references politicians often make. He’s quoted theologians such as St. Augustine and St. Francis of Assisi, and Catholic hymns like “On Eagle’s Wings,” a favorite among many liberal Catholics.

Part of this resurgence can be seen as part of a broader reaction against the expressions of Christian nationalism that coalesced around former President Donald Trump, many observers say, who appointed an outsize number of Evangelicals and religious conservatives in his administration.

“I think it’s been an important corrective to how in America, at least, when we hear about religion and politics, it’s always about the right,” says Kraig Beyerlein, director of the Center for the Study of Religion and Society at the University of Notre Dame. “There’s usually very little discussion about the religious left.”

Over the past few years, however, a number of high-profile Democrats – including current New Jersey Sen. Cory Booker; Secretary of Transportation Pete Buttigieg; and Missouri Congresswoman Cori Bush, a pastor from St. Louis – have made their faith a centerpiece of their liberal policy positions as churches on the left become more politically active.

In a recent study, in fact, Dr. Beyerlein and his colleagues found that a “staggering” 41% of congregations who identified as politically liberal participated in demonstrations or lobbied elected officials during the presidency of Mr. Trump, compared with only 5% who said they were active during the administration of former President Barack Obama.

Still, according to survey data, there are more than three times the number of self-identifying conservative congregations in the U.S. than liberal churches. Conservatives make up nearly half of the nation’s churches, while only 15% identify as liberal, he says, with 39% reporting they stand in the middle of the political spectrum.

A liberal Protestant who has attended churches committed to the sanctuary movement, Dr. Beyerlein was also surprised to find that a third of Catholic parishes across the U.S. declared themselves as sanctuaries for unauthorized immigrants during the Trump administration.

But the historic election of the Rev. Raphael Warnock to the U.S. Senate in January only underscores how much Black Protestants have taken the lead in reviving the liberal traditions of Christianity. As the first African American senator from Georgia, Senator Warnock has maintained his role as pastor of Ebenezer Baptist Church in Atlanta, the former congregation of Martin Luther King Jr.

“The amazing thing about Raphael Warnock’s movement into the U.S. Senate is that it fits perfectly into the trajectory of African American Christianity post slavery,” says Willie Jennings, professor of systematic theology and Africana studies at Yale University in New Haven, Connecticut.

“It is a Christianity that aimed from the very beginning to call America to its better angels, its better light, and to try to draw the nation away from hypocrisy and toward living up to the Constitution and the nation’s founding documents.”

But the easy demarcations of “liberal” and “conservative” have never really captured the traditions of the Black church, he says. “The better word would be ‘biblicist’ than conservative, which has its strengths and weaknesses.”

“The central strength of our biblicist tradition is that certain very powerful stories about how life ought to be lived is what guides us,” Dr. Jennings continues. “So the life of Jesus, the story of healing the sick and feeding the poor and fighting for the orphan and widows and turning to the least of these, has always made us recognize that this is where God’s attention is turned. All of that is crucial to African American Christianity.”

“But on the other side, which is also problematic, there are certain ways in which the biblical narratives describe the role of women or describe the ideal household in ways that do align with a social conservative vision,” he says.

In December, a group of 25 Black pastors wrote an open letter to Senator Warnock urging him to oppose abortion. Many Catholic bishops have raised similar concerns about the abortion-rights stance of President Biden.

A modest yet significant movement

Make no mistake, though energized and resurgent, liberal Christianity remains on a relatively small space in the country’s religious landscape.

But its traditional de-emphasis on exclusive doctrines may fit well into the larger social movements in the country right now. Millennials and younger Americans increasingly care little about the exclusive particulars of traditional Christianity, even as Christians on both the left and right see faith as an integral part of political action.

Yet the value of a liberating openness to the “other” in liberal traditions can be challenging as well, says Mr. Schmalz. When he worked with Catholic converts among those on the bottom rung of India’s caste system, many resisted attempts to develop specifically Indian forms of Catholic worship.

“Many of the [lowest caste members] I knew considered that to be a concession to high caste Brahmins, and so they were more comfortable with the traditional aspects of Catholicism, like the old mass when it is sung in Latin and so forth,” he says.

“And it was really interesting to me how powerful charismatic Catholicism was,” continues Mr. Schmalz, talking about a faith that combines Catholic doctrine with evangelical traditions, including the laying on of hands. “It was in this context that these people could touch and be touched,” and for those whose caste meant that others avoided touching them “that’s obviously something incredibly meaningful.”

Deeply conservative, both charismatic Catholics and Evangelicals were well represented at the Capitol riot on Jan. 6, even as each make up some of the fastest growing movements of Christians on a global scale.

But the rejuvenation of liberal Christianity today “represents an opportunity for Christian political discourse to move from the culture wars to the social gospel,” Mr. Schmalz says, or offer a chance for the country “to gradually shift away from what they call ‘pelvic issues’ to broader social justice questions, such as the death penalty, immigration, and universal health care.”

Covid-19 cuts U.S. life expectancy by a year in first half of 2020, biggest drop since WWII