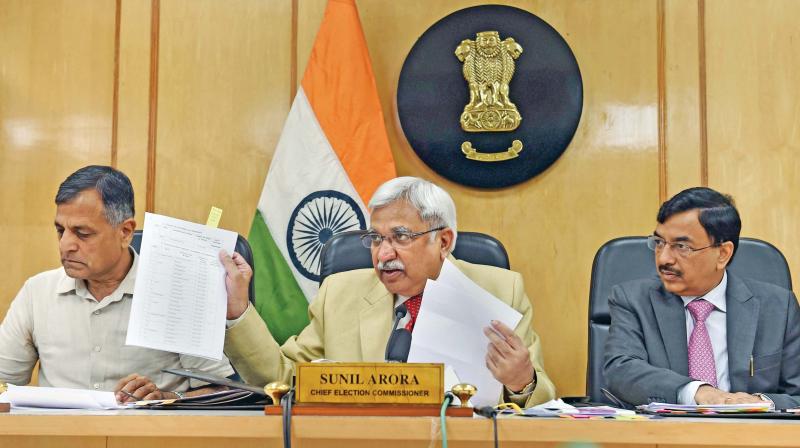 Puducherry: Chief Election Commissioner Sunil Arora said here on Friday the Assembly polls due in the next few months would be held simultaneously in Puducherry and Tamil Nadu.

He was addressing reporters here before ending his two-day visit, along with a team from the Election Commission, to the Union Territory to review its poll preparedness. Asked about voting rights of members nominated to the Territorial Assembly, he said the Supreme Court had in 2018 ordered such members had voting rights.

He read out the provisions for nomination of members in the Union Territory Act and from the extracts of the apex court judgement on voting rights for nominated legislators. Arora said he and his team have had discussions with the officials of various departments such as the enforcement departments and state-level bankers committee, among others.

"It was a fruitful meeting," he said. The Chief Election Commissioner further said the commission would ensure free, fair, inducement-free and COVID-19-safe elections. He said there would be zero tolerance to misuse of money power and illegal distribution of freebies and other inducements to voters. He said the number of polling booths would be increased from 952 to 1,564 in the Union Territory. The election official said it was also insisted at the meeting that no polling station should be above the ground-level as the aged and physically challenged voters should face no difficulty. He released a booklet on SVEEP (systematic voters education and electoral participation) and also flagged off a vehicle to highlight the chief features of SVEEP.