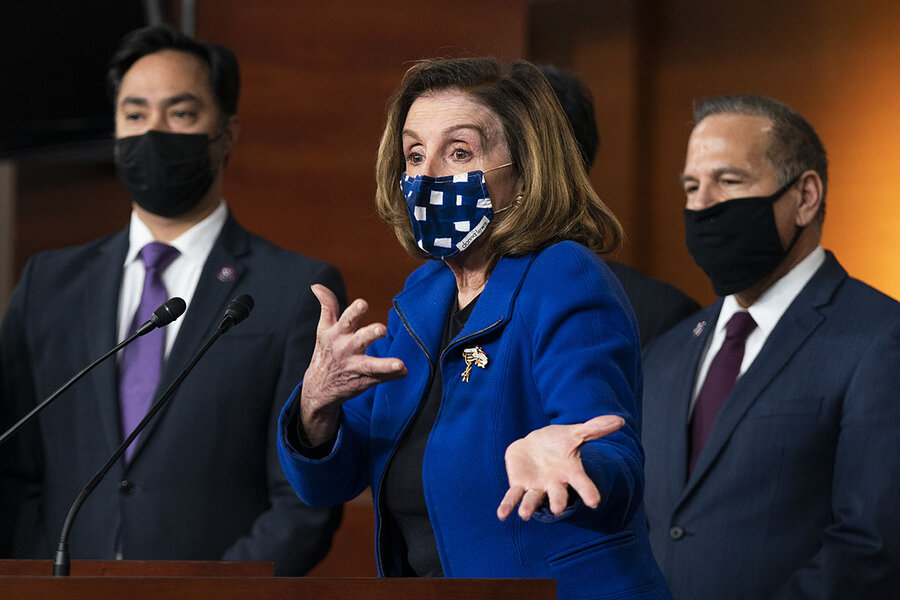 Three presidents, tried and not convicted

Impeachment is the problem most recently on public display. It was meant as a check on abuse of power by officials, via threat of removal. While federal judges and lower-level members of the executive branch have indeed lost their jobs through impeachment trials, no president has ever been impeached in the House, convicted by the Senate, and summarily removed from the Oval Office.

The sample size is small. Only three presidents have been impeached by the House: Andrew Johnson, Bill Clinton, and Donald Trump. (Richard Nixon resigned under threat of almost certain impeachment and removal.) But Senate votes to convict impeached presidents have been almost entirely partisan. The seven Republicans who voted “guilty” on Mr. Trump’s second impeachment represent a high-water mark for bipartisanship, by far. Prior to last week only one senator had ever voted to convict a president of their own party.

Sen. Ben Sasse of Nebraska was one of the seven. In a statement explaining his vote, he said that Congress has become a weaker institution than the framers thought it would be. If Congress can’t respond to an attack on itself instigated by the head of the executive branch, the constitutional balance of power will be further tilted away from the Capitol, according to Senator Sasse.

“That’s unacceptable. This institution needs to respect itself enough to tell the executive that some lines cannot be crossed,” he wrote.

Should Congress just give up on impeachment, recognizing that in today’s balanced and fraught political environment the removal of a president is highly unlikely? A vote to simply censure Mr. Trump might have had a better chance of success.

Professor Keck believes that impeachment remains an exceptional tool for exceptional circumstances, but that lawmakers and voters should realize its primary function is not removal, but documentation. It lays down a marker for historians. In decades to come Mr. Trump’s impeachments will be mentioned high in descriptions of his presidency, as will Mr. Clinton’s and Mr. Johnson’s singular impeachment rebukes.

“I do think the House managers did a really effective job of getting out the first draft of history,” says Professor Keck of last week’s Senate trial.

There is also the chance that impeachment, rather than being abandoned, will become more regular, a common tool of partisan struggle. In the wake of Mr. Trump’s acquittal some Republicans have threatened a tit-for-tat retaliation if the GOP retakes the House in 2022.

On Fox News on Sunday, Republican Sen. Lindsey Graham of South Carolina implied that Vice President Kamala Harris could be impeached for expressing support for a bail fund for Black Lives Matter protesters. During Mr. Trump’s trial his own lawyers warned that impeachments will become “commonplace,” and said that even out-of-office Democratic presidents might now be hauled back for trial.

It’s possible that the downward spiral of partisanship could take the country into a place where any and all means of harassing a president from the opposing party become conceivable. But that would likely mean taking flimsier charges more seriously, or trying to impeach a president for relatively small offenses.

Many in the Senate probably remember Bill Clinton’s impeachment on charges of lying about his affair with a young intern, says Frank Bowman, an expert on impeachment at the University of Missouri School of Law. Voters at the time had a negative view of the prosecution of Mr. Clinton. His approval ratings rose.

“If these guys have got any political memory or anybody around to remind them, they’ll remember that egregious misuses of impeachment have a tendency to backfire on the party,” says Professor Bowman.

He rejects the notion that impeachment is more broken than it has ever been. It simply reflects the reality of hyper-partisanship in the country and a Congress where real work has almost ground to a halt.

“The impeachment mechanism, like any other of the components of the Constitution … is no better than the people that move the levers,” he says.

The frequency of impeachments has accelerated in recent years, but given that the numbers are still very small, it’s hard to know if that’s a stable trend or just statistical noise. There have been periods of intense polarization and divided government – think the presidencies of George W. Bush and Barack Obama – that didn’t produce impeachments.

Political scientists don’t really have a unified theory on the conditions that lead to impeachment, but they may occur in periods when the rules of government become muddled, says Julia Azari, assistant chair of political science at Marquette University.

“It’s really about when gray areas emerge. And that’s just as much about the political context as it is about the president himself,” she says.

So, whatever occurs with the cycle of impeachments, other aspects of partisan realpolitik may accelerate. Sen. Mitch McConnell’s long blockade of Obama nominee Merrick Garland to save a Supreme Court seat for Republicans could lead to further tough actions on high court nominees. Mr. Trump ignored many congressional subpoenas for testimony and administration witnesses, with apparent impunity – perhaps setting a precedent. The Trump presidency also proved that it is possible to avoid the need for Senate confirmation for top officials by simply playing a shell game with “acting” appointments.

Today’s voters like it when their politicians play constitutional hardball, says Professor Azari. This is especially true of Republican voters increasingly insecure about their place in the U.S. as the nation becomes more diverse and their party’s strength wanes.

On the other hand, the lesson of 2020 and 2021 may be that competence and policy matter. Dealing with the coronavirus pandemic, organizing vaccine distribution, keeping electricity flowing in the face of climate-change-driven storms – all of this requires political action as opposed to shouting on cable news.

“We are … seeing a resurgence in the idea that there needs to be some governance,” says Professor Azari.

The big picture is that the country is struggling to deal with all these real problems even as its politics attempt to represent more constituencies than ever before. Discomfort is inevitable.

“Democracy has expanded,” says Professor Azari. “The kinds of people who have access to positions of power has expanded, and that is going to make things more complicated and that is not a bad thing.”