European Commission President Ursula von der Leyen couldn’t hide her happiness after Joe Biden singled out the EU for his  presidential plans going forward. During his address at the Munich Security Conference, Joe Biden praised the alliance between the EU and the US, as he failed to mention Boris Johnson or the UK.  Responding to his speech, Ms von der Leyen said: “It was exciting to see the pledging of the United States – indeed the United States are back!” 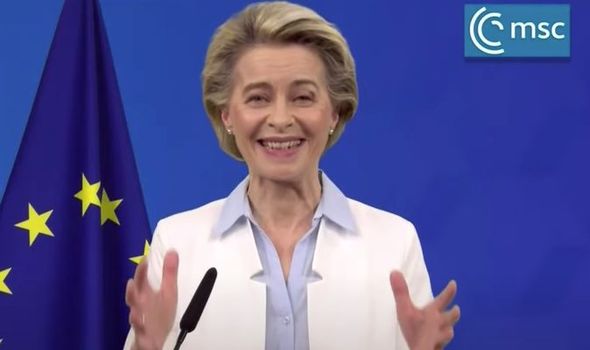 She added: “Let’s commit to invest in a strong economic recovery.

“A recovery that is digital and sustainable, fair and inclusive.

“This is why we in Europe just built our recovery package, next generation EU we call it, it is 1.8 trillion euro.”

Joe Biden says EU alliance must be a 'strong foundation'

This comes after Joe Biden used his speech at the MSC to hail the partnership between the United States and the EU as the “cornerstone” of his foreign policy plans.

The US President said: “The partnership between Europe and United States in my view is and must remain the cornerstone of all that we hope to accomplish in the 21st century, just as we did in the 20th century.

“Let me erase any doubt, the United States will work closely with our European Union partners and capitals across the continent from Rome to Riga to meet the range of shared challenges we face.”

He repeatedly said that the “America is back” on the world stage.