Hello. In this article, I will show you how to make a simple 12V powered spot welder. Most of the parts necessary for assembling the device can be obtained from faulty switching power supplies or boards of old televisions and monitors. 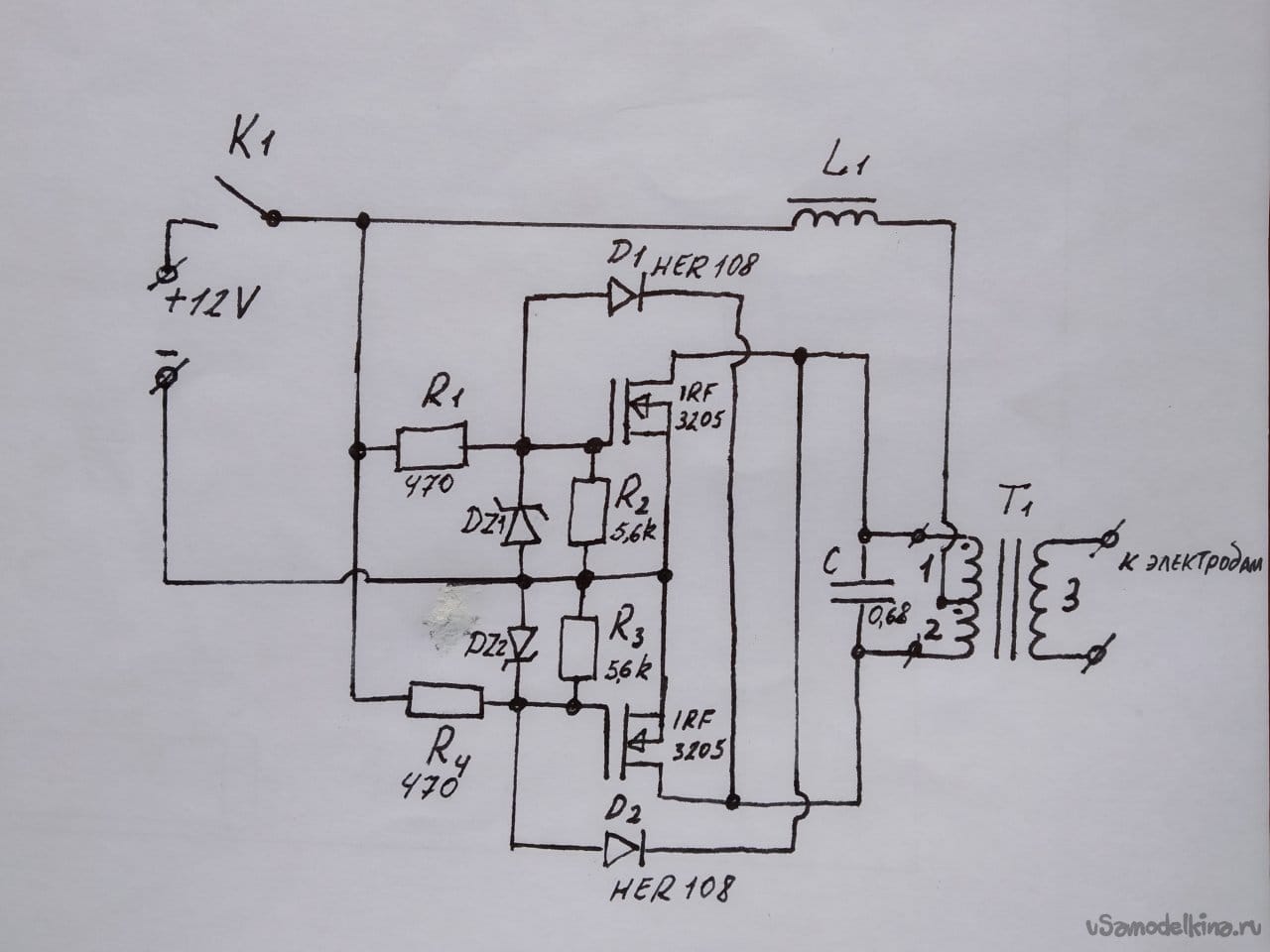 Scheme can be roughly divided into two main parts. The first is a generator, the second is a transformer, in the diagram it is designated as T1.
The generator is built according to the scheme of a simple two-stroke autogenerator. Alternately opening, the transistors provide the formation of short pulses in windings 1 and 2. I used IRF 3205 field-effect transistors, but other N-channel field-effect transistors designed for a current of more than 8A (but preferably for a current of more than 40A) and a voltage of more than 50V are suitable. Such transistors can be found on the boards of old CRT monitors (for example, IRF630 transistors). In the diagram, you can see zener diodes (or otherwise Zener diodes) designated DZ1 and DZ2. They are necessary to protect the gates of transistors from overvoltage, since most field-effect transistors have a maximum allowable gate voltage equal to 20V. In the circuit, due to the presence of inductances (choke and transformer), there is a risk of the formation of a voltage at the gate of the transistor that significantly exceeds the specified value. When powered from 12V, you can use zener diodes with a stabilization voltage within 12-15V. But in my circuit, in the absence of others, zener diodes are installed at 6.2V, while the circuit remains operational. You should also pay attention to the resistors designated as R1 and R4, I used components with a nominal resistance of 470 ohms, but this value can be changed over a wide range (120 – 510 ohms). But it is important that the resistors used are rated for more than 1 Watt. Since during the operation of the circuit, these resistors can heat up and will fail when using low-power elements. If used resistors from faulty devices are used, it is important to be able to determine the rated power of the component. Everything is quite simple, as a rule, the larger the resistor, the higher the value of its rated power. You can find information about this on the Internet, but for convenience, I brought a photo showing resistors of various powers next to a regular match.
Also in the circuit you can see the capacitor C. The current in windings 1 and 2 depends on its rating, as well as, to a certain extent, the operating frequency of the circuit. I used a 0.68 uF 250V capacitor.
In the diagram, you can see two diodes D1 and D2 are ultra-fast diodes, as the name suggests, their difference lies in a much higher response speed than conventional rectifier diodes. I used HER108 diodes, but they can be replaced with analogs UF1004, UF1007, HER308 or others. When choosing diodes, you should pay attention to such a parameter as the recovery time, this figure should be less than 100 ns.
The assembly of the device can be started by winding the transformer. Two ferrite rings М2000НМ1-Б with dimensions 31×18.5×7 were used as a core.
Having folded two rings together, you should wrap them with electrical tape or tape, this will prevent the rings from shifting relative to each other in the process of winding windings and further operation.
Next, you should make the primary winding. It consists of 7 full turns and is made with a wire with a diameter of 0.5 mm with two cores of four wires each (the number of turns can be less, but not less than 3). In fact, these are two windings of four wires each wound simultaneously. 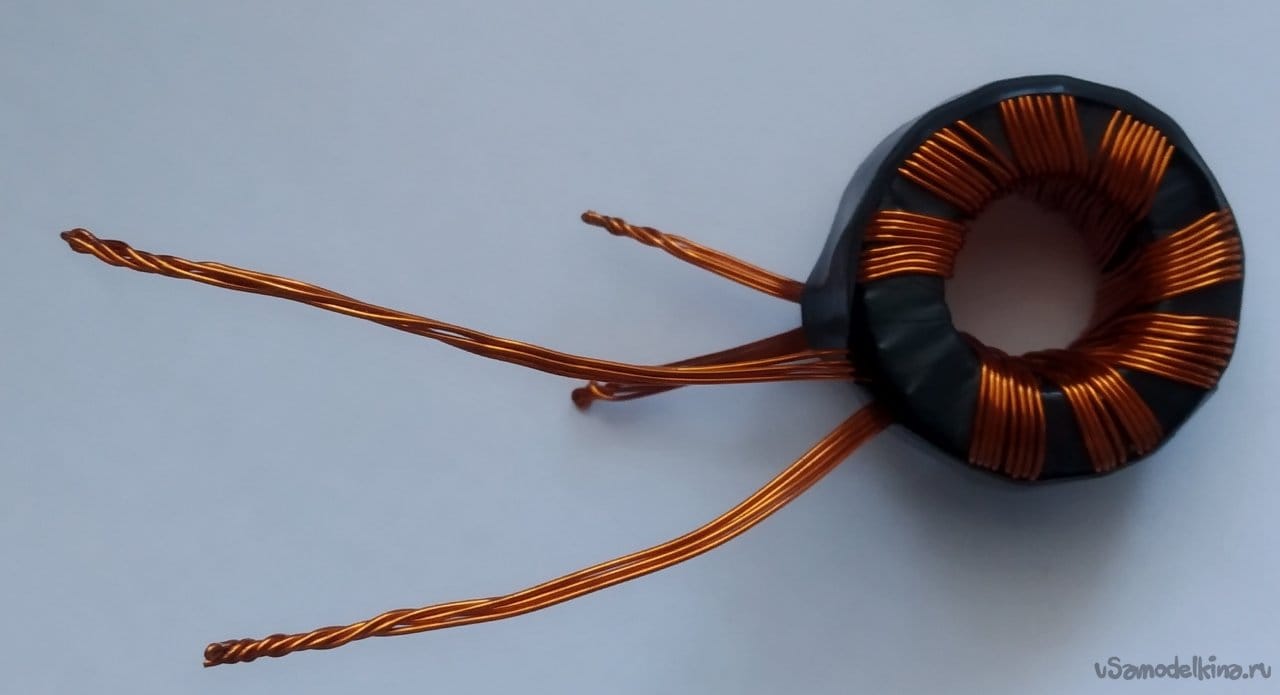 After that the end of one winding must be connected to the beginning of another, thereby forming a branch from the middle.
Then the choke should be made. It is based on a metal-powder ring from a computer power supply. The winding consists of 12 turns with two wires 0.5 mm in diameter. 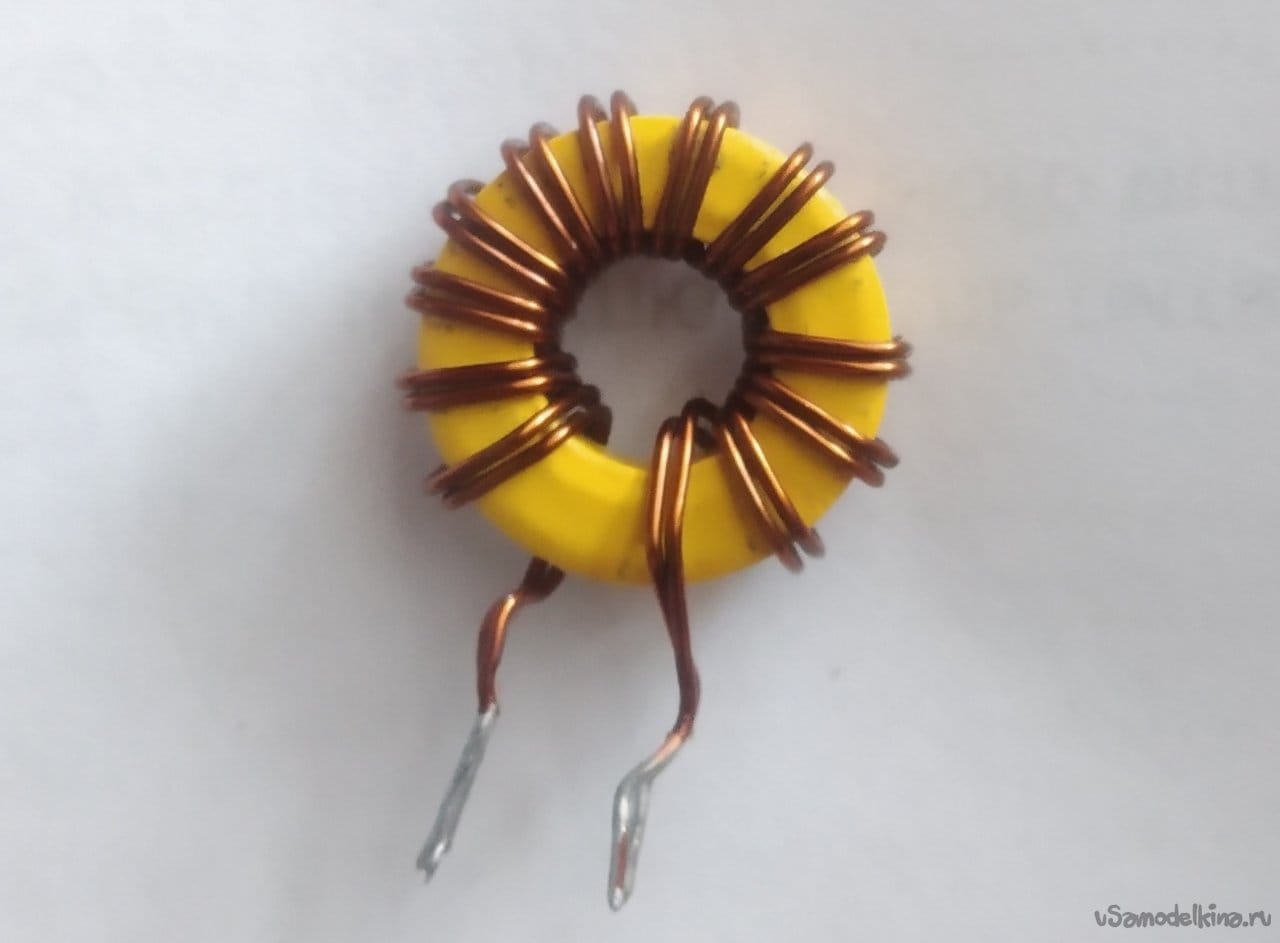 The number of turns can be less (but preferably at least seven), and the wire cross-section is larger, it depends on the rest of the circuit elements. If the choke in the finished device heats up strongly during operation, you should increase the wire cross-section and/or reduce the number of turns.
Next, proceed to the assembly of the circuit on the board. It is better to assemble the circuit from the center of the board to the edges. So that the already installed details do not interfere with the installation of subsequent ones. 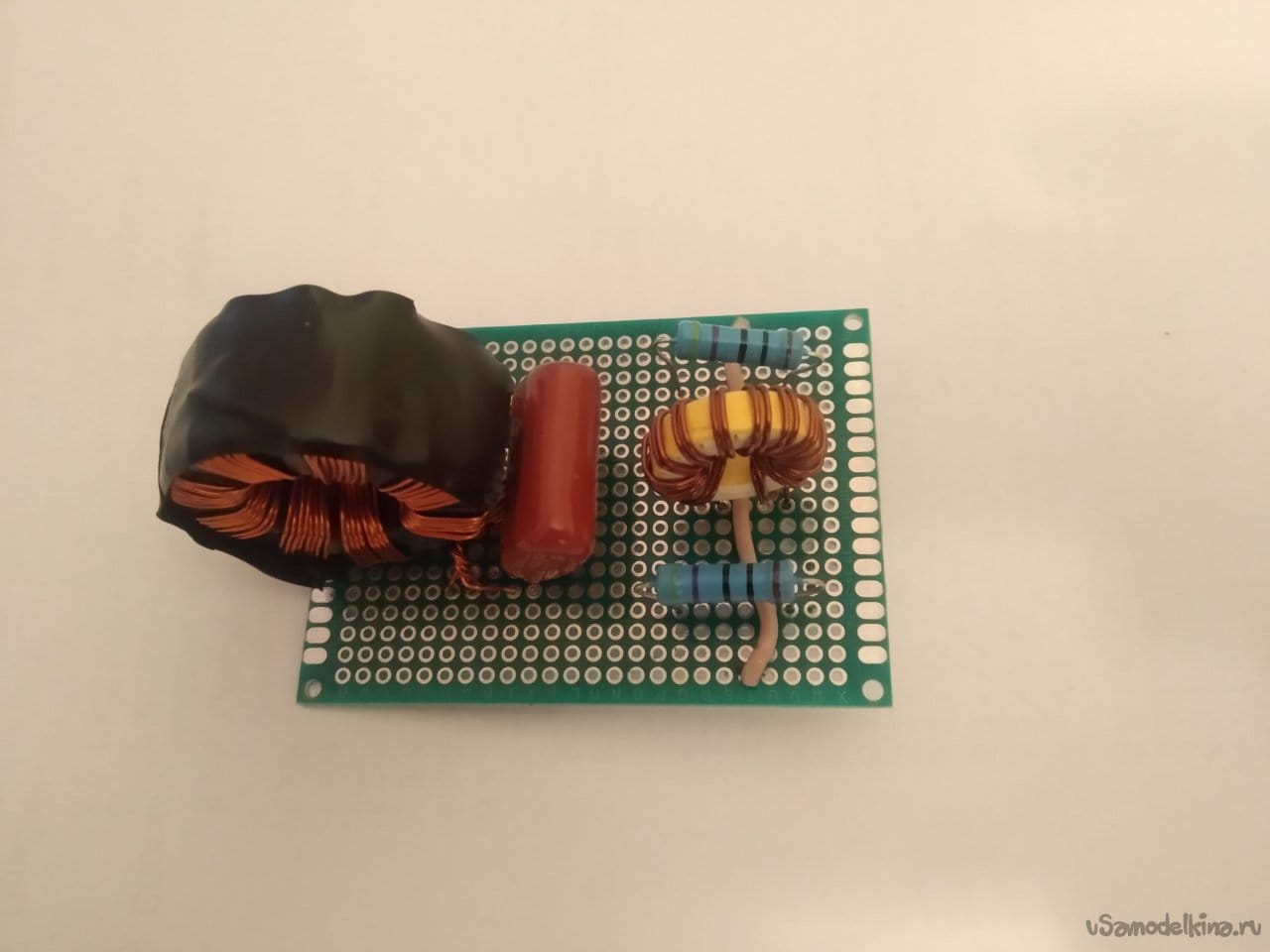 Since diodes are installed between the gate of one transistor, and the drain of the other, in order to avoid a short circuit, a heat-shrinkable tube or pieces of insulation of the mounting wire should be put on the leads. 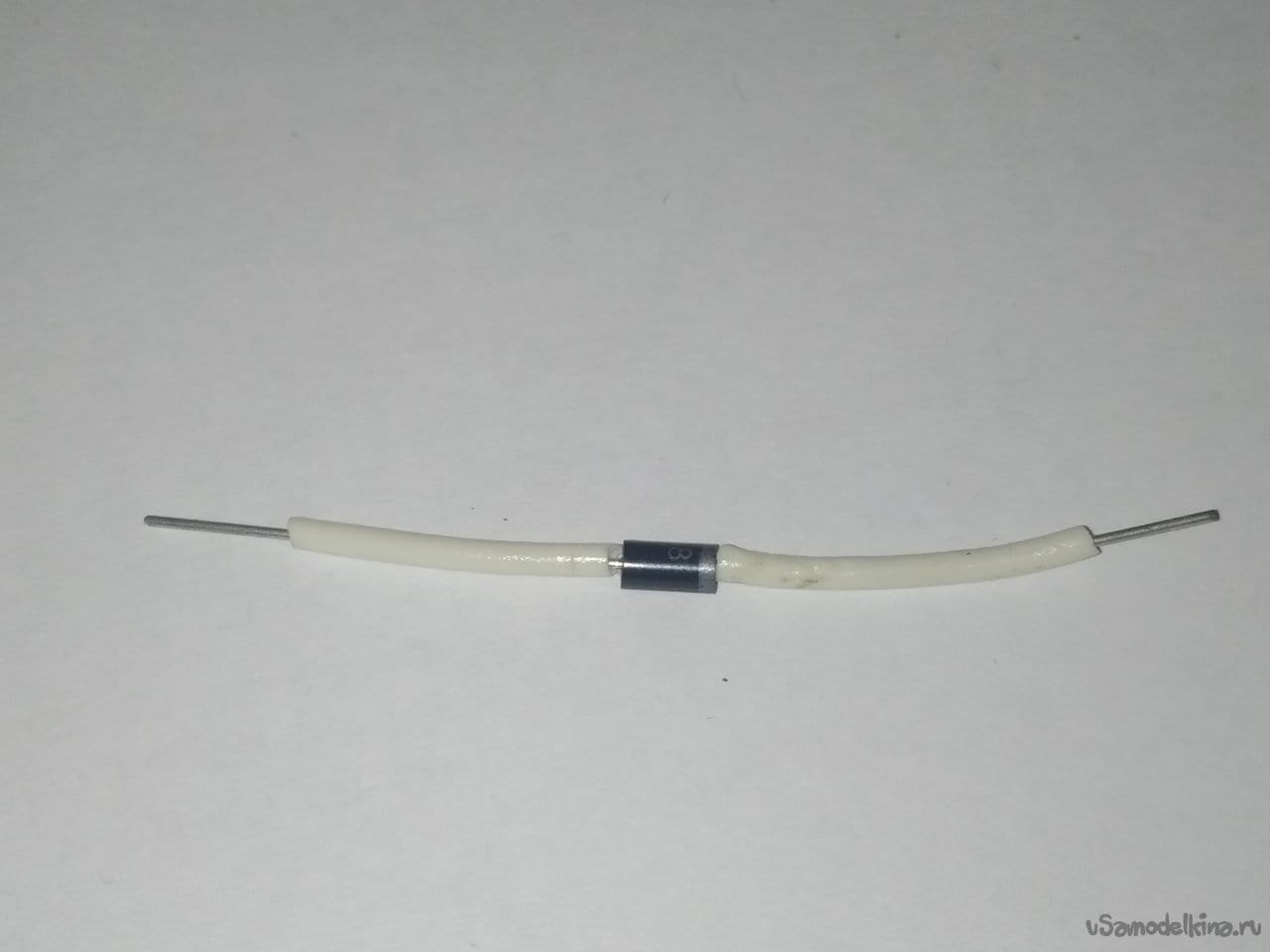 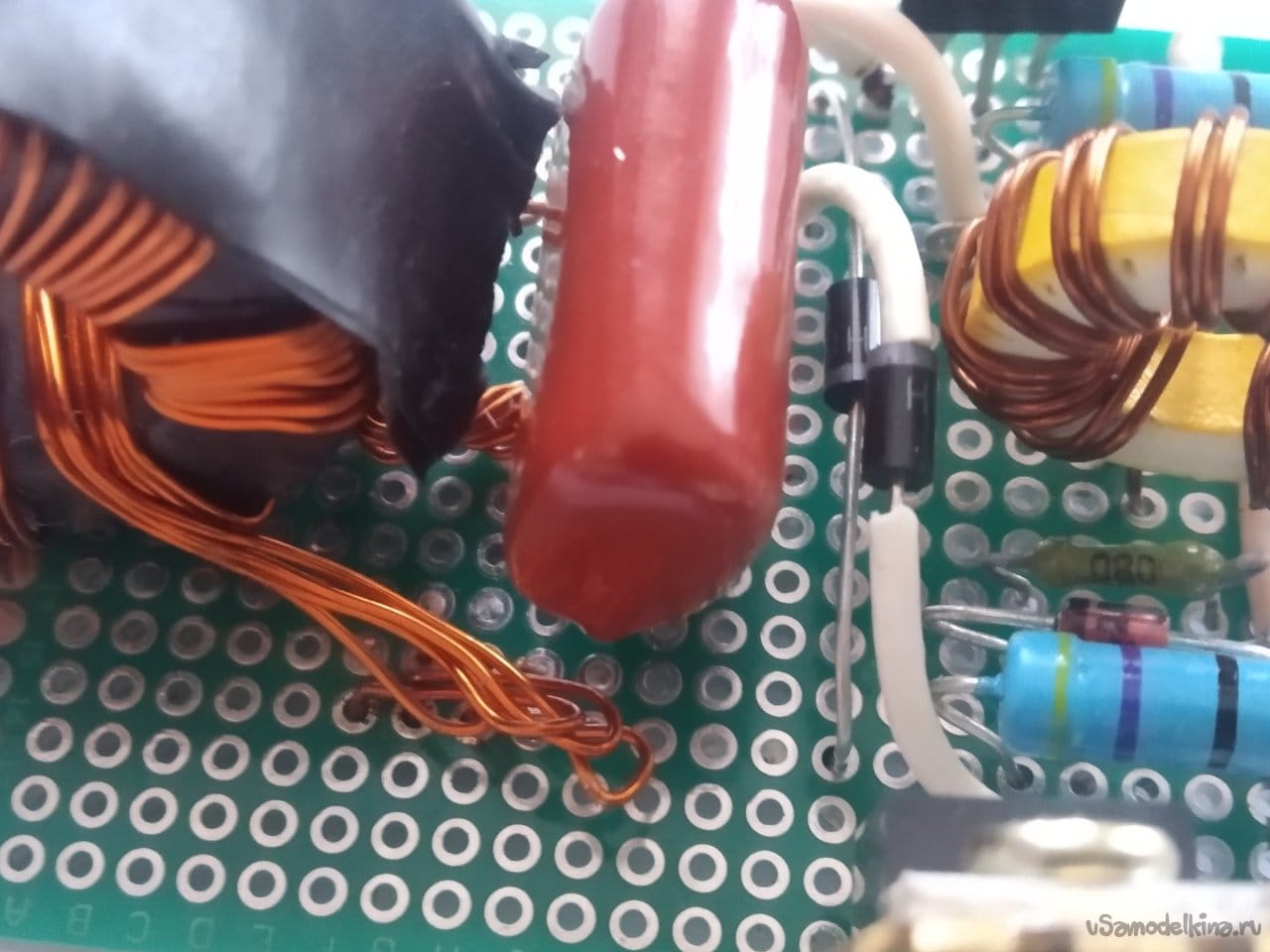 It is advisable to solder the transistors last. It is necessary to install heat sinks on the transistors themselves to remove heat.
It is important to remember that the metal substrate of the transistor, to which the heat sink is attached, is integral with the drain of the transistor. Therefore, when using a common heat sink for both transistors, it is necessary to install an insulating substrate between the body of the semiconductor device and the heat sink, otherwise a short circuit will occur. Also, even using separate heatsinks, you should make sure that the heatsink does not come into contact with the tracks on the board or pins of other elements.
Then you can proceed to the manufacture of the secondary winding of the transformer. It consists of one turn with three cores of 1 mm diameter winding wire. The output current and voltage depend on the number of turns and the cross-section of the wire in the secondary winding. Therefore, I deliberately did not fix the secondary winding with epoxy glue or electrical tape, so that, if necessary, I could easily change the number of turns or wire cross-section, changing the output characteristics of the device. Screw terminals are installed on the winding terminals.
After that, the welding cable should be made. In my case, this is more a design for testing the device's performance than a full-fledged cable. For the manufacture, four pieces of mounting wire were used, 1.5 squares each. Having connected them, in pairs, you should attach the test electrodes made of pieces of thick copper wire as shown in the photo below. 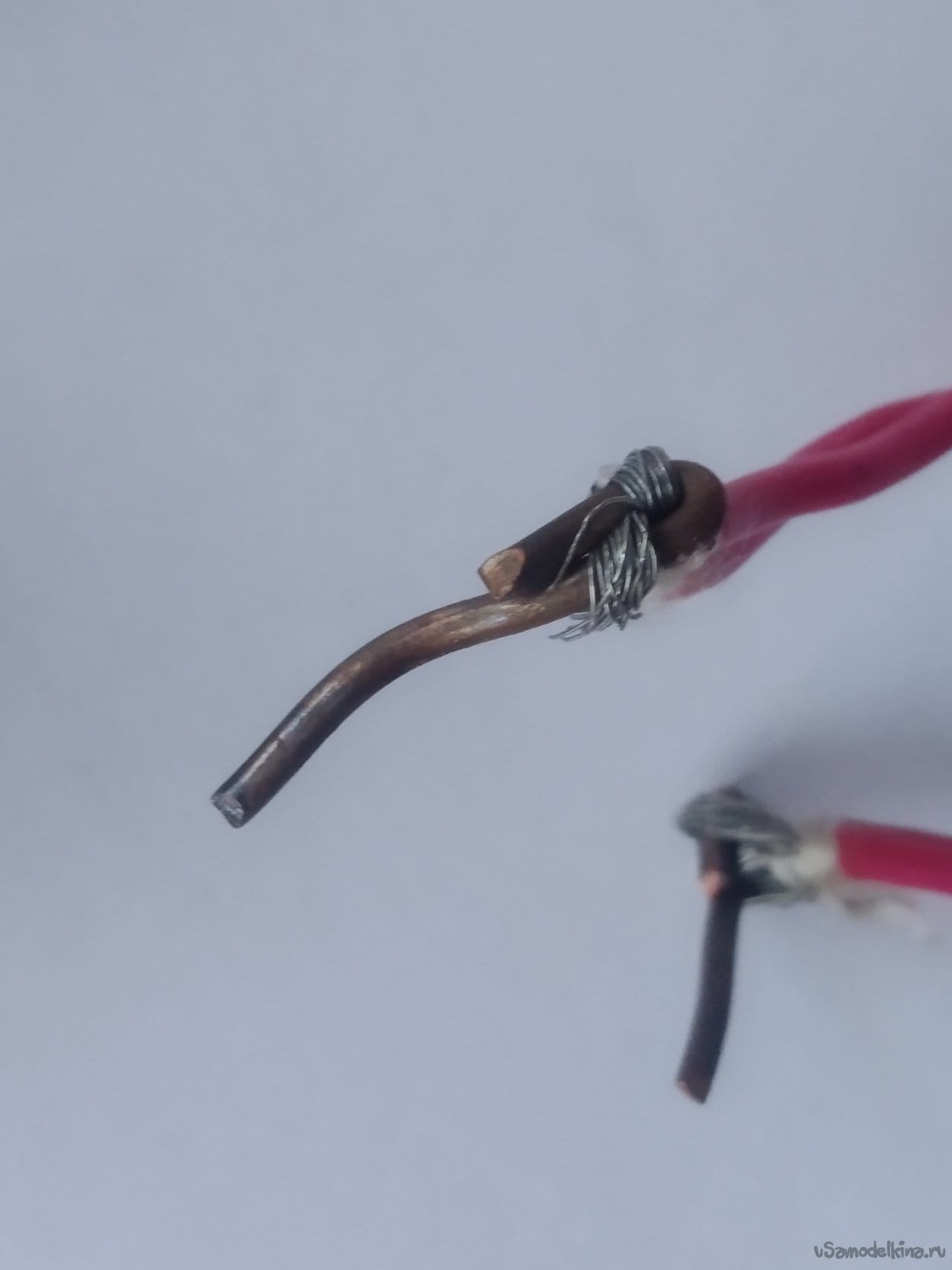 The welding cable is ready.
Now it should be attached to the secondary winding of the transformer using screw clamps.
The assembled device is shown in the photo below. 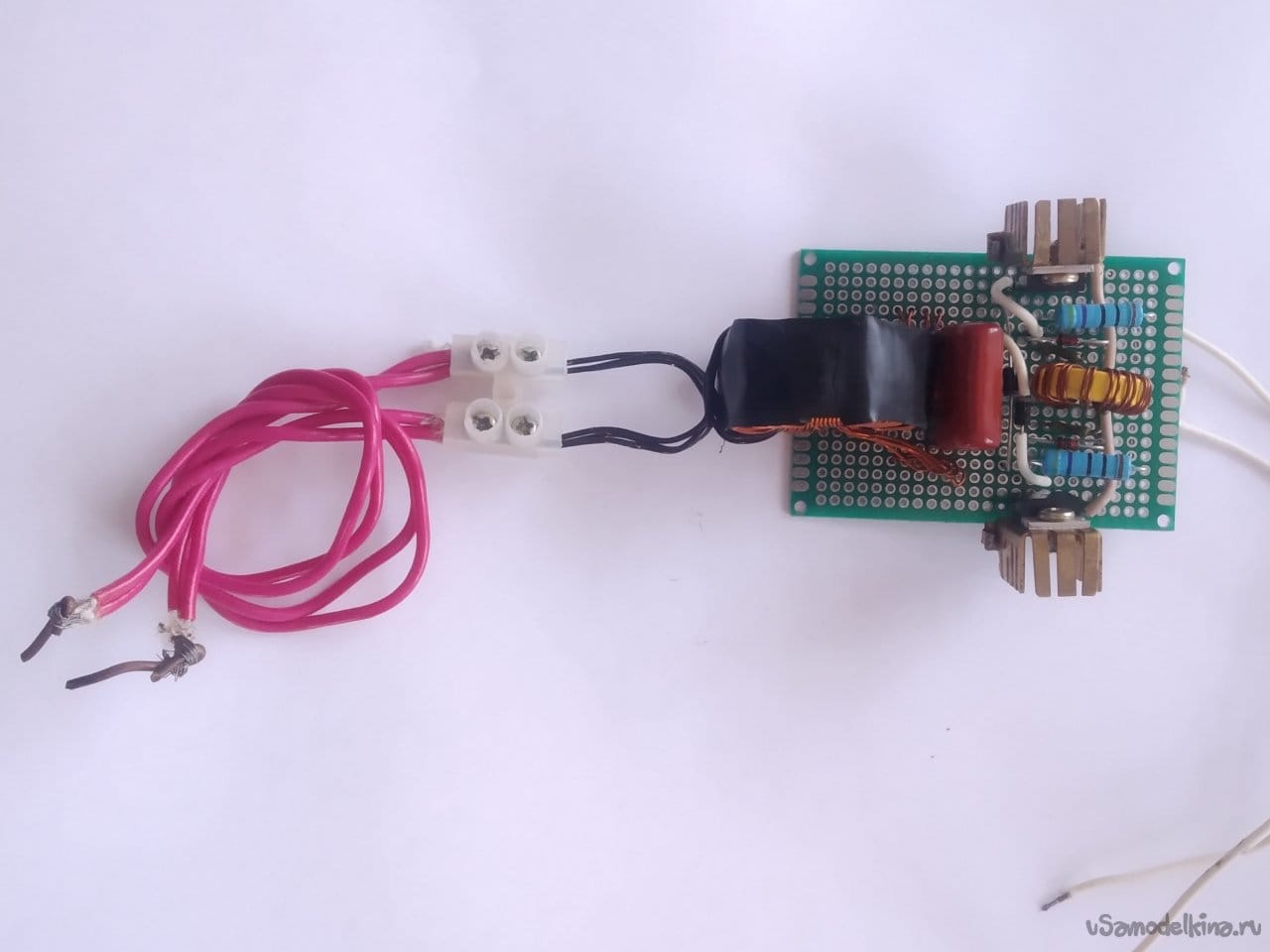 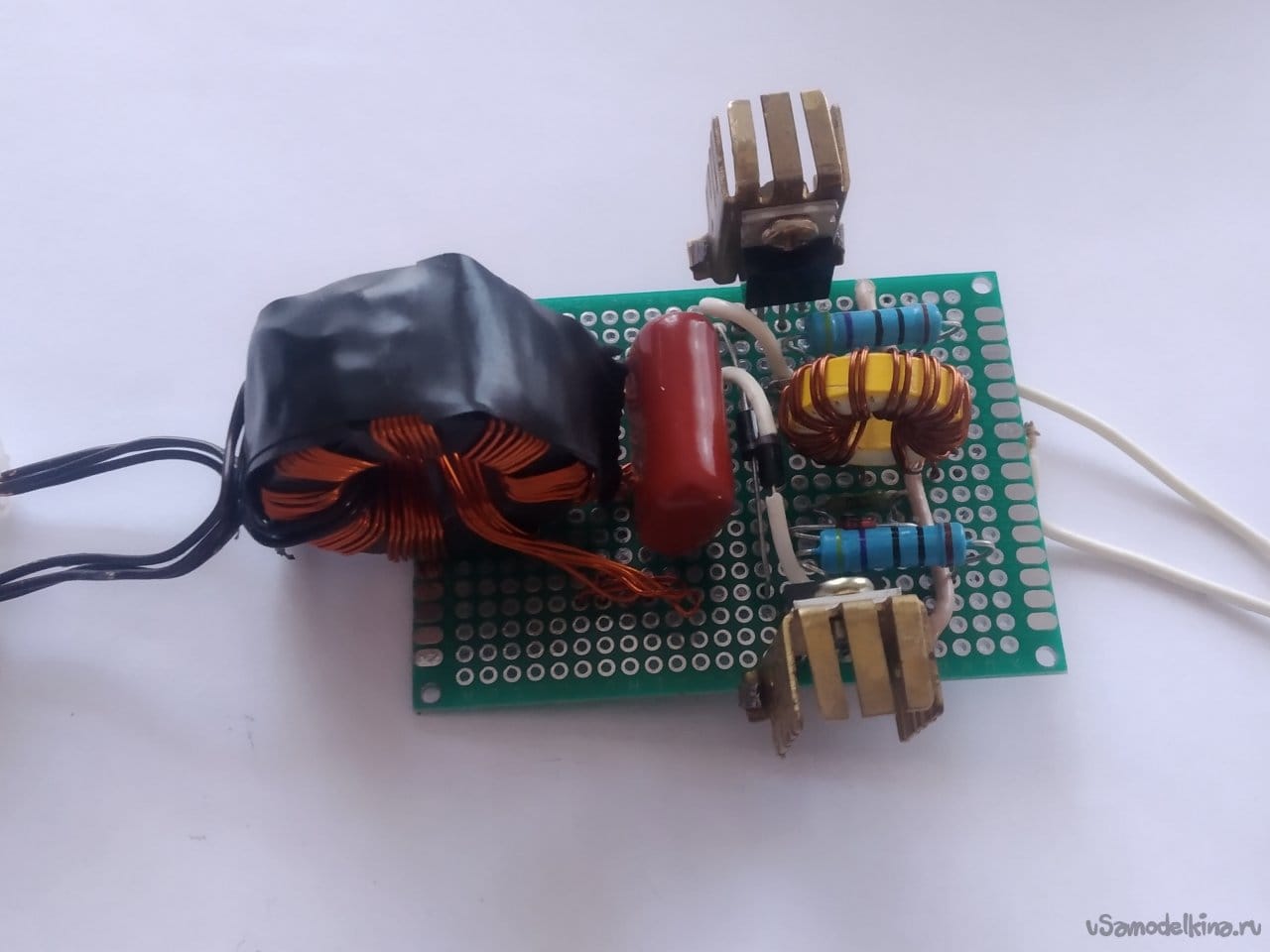 The finished device is connected to a power supply unit with a voltage of 12V and a power of 100W or more.
To check the functionality touched the electrodes with the blade of a clerical knife. Metal, melts at the point of contact.
This welding machine can be used for spot welding of lithium ion batteries. Or as a source of current for various types of heating elements. An important advantage of the device is its low-voltage power supply, which allows it to be connected to a battery and used as a portable device.

Double bed made of a profile pipe and chipboard