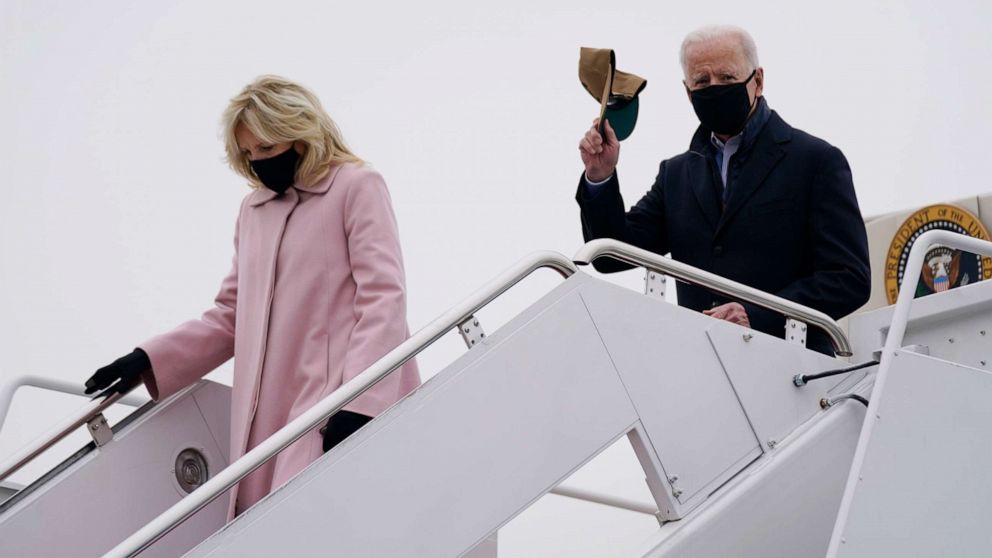 President Joe Biden wants no more out of this week of Presidents Day than to get back to the work of his presidency.

He’ll be on the road for the first official trip of his time in office on Tuesday, for a CNN town hall in Wisconsin, followed by a visit to a COVID-19 vaccine facility in Michigan on Thursday.

There’s both urgency and opportunity for the Biden White House in this post-impeachment window. There’s also the shadow of former President Donald Trump, who continues to dominate Republican politics and so much else even without a public word about what he does next.

Fallout from impeachment is being felt most intensely among Republicans who lined up in support. State-party censures and primary challenges serve as warnings that could discourage policy cooperation, with a growing sense that the GOP will be alternatively stuck with or thrilled to embrace Trump and his movement well into 2022.

On the left, the failure to convict Trump is being cast as a told-ya-so moment revealing Republicans to be captive to a disgraced former president. Calls are growing to abolish the Senate filibuster and for Biden to give up on finding GOP votes for COVID relief and the rest of his agenda.

Internal GOP chaos may be better than the alternative for Democrats, from a crass political perspective. But it’s a tough hand for Biden to play into a new era of optimism and cooperation.

New York Gov. Andrew Cuomo marked Presidents Day with a lengthy presser during which he repeatedly defended his administration’s handling of nursing home coronavirus cases. Still, the governor — who released a book last fall about lessons learned in leadership during the pandemic — admitted his office failed to report the death toll as requested to the state legislature last summer.

“The void we created by not providing information was filled with skepticism and cynicism and conspiracy theories, which furthered the confusion,” Cuomo said, while confirming his office prioritized requests for information from the Department of Justice over those of the state legislature.

The governor’s concession comes as state legislators on both sides of the aisle are calling to repeal at least some of his emergency powers, which are set to expire on April 30. On Monday, Cuomo insisted those powers are unrelated to the issue at hand.

“Emergency powers have nothing to do with nursing homes, I have taken hundreds of actions, the legislature can reverse any action that I take,” he said.

Although it’s not likely that Cuomo would be stripped of those powers in the immediate future, lawmakers are likely weighing the possible consequences of following through with such a move without putting public health at risk.

According to a Siena College Research Institute poll released this morning, 61 percent of New York voters approve of his overall handling of the pandemic. Still, the governor’s approval falls to 39 percent on the issue of informing the public about the coronavirus nursing home deaths.

The seven Republicans who broke ranks by voting to convict Trump are already incurring the wrath of his allies back home. Between rebukes from state party leaders and censures, the impeachment vote is pitting Republicans against Republicans, with fealty to the former president drawing the dividing lines within the GOP.

But in next year’s Senate races, the political fallout might not matter all that much. Two of the Republicans — Sen. Richard Burr of North Carolina and Pat Toomey of Pennsylvania — are retiring next year, Sen. Mitt Romney of Utah isn’t up for re-election until 2024, and three — Sens. Susan Collins of Maine, Ben Sasse of Nebraska and Bill Cassidy of Louisiana — just won re-election last November.

The possibility of primary challenges is only a risk for one: Sen. Lisa Murkowski of Alaska, the lone Republican senator who voted for impeachment is set to face voters in 2022. Murkowski, though, is familiar with a tough fight and has proven her durability, earning her seat in 2010 with a write-in campaign after losing the Republican primary amid the tea party movement. And next year, she will benefit from Alaska voters changing their primary rules last fall, allowing for nonpartisan “jungle” primaries, in which all candidates appear on one ballot regardless of party affiliation.

Still, across the 2022 Senate map, Trump is certain to be at the center. Some of his closest allies are even floating potential matchups that would pit Trumps against Trump supporters, with South Carolina Sen. Lindsey Graham calling Lara Trump “the future of the Republican Party” and “almost a certain nominee” for Burr’s soon-to-be open seat on Fox News Sunday, even though Rep. Mark Walker, a Trump backer, is already vying for the seat.

Driven by sharp divisions that reflect the persistent partisan fissures within the country, the second impeachment trial of former President Donald Trump solidified public support for convicting him of inciting insurrection, a new ABC News/Ipsos poll finds. Over half of Americans (58%) say that Trump should have been convicted, which tracks with the 56% who said the same last week before the 57-43 Senate vote to acquit left Trump free to possibly run for office again.