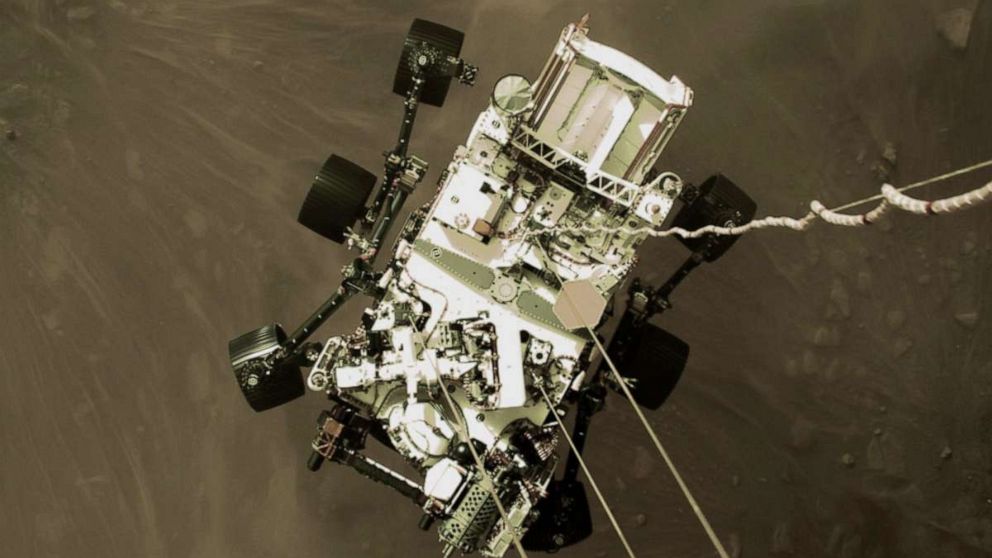 NASA released new images from Mars on Friday, including one of the Perseverance rover’s daring descent onto the surface of the red planet.

One image was taken as Perseverance was approximately seven feet (2 meters) above the surface of Mars. Friday’s images are the first colored photographs released by NASA from Perseverance.

“This is an image of the rover Perseverance, slung beneath the descent stage … as it is being lowered to the surface of Mars,” Adam Steltzner, the chief engineer of the Mars 2020 mission at NASA’s Jet Propulsion Laboratory, said in a news conference Friday. “You can see the dust kicked up by the rover’s engines.”

Steltzner said the team is “overwhelmed with excitement and joy to have successfully landed another rover on the surface of Mars.”

He expressed hope that the images from Perseverance will inspire others the way iconic shots from the cosmos in the past have inspired him.

“When I think back on our human space exploration, I am brought to remember the images that bring us as humans into that process,” Steltzner said.

A second image released by NASA depicts the horizon as seen from Perseverance after it landed.

A third image shows the right-front wheel of the rover and a more detailed look at some of the rocks on Mars.

The rover, NASA’s most-advanced yet, is equipped with 23 cameras. More photos and video from Mars are expected to be released in the coming days.

Perseverance, dubbed “Percy,” successfully touched down on Mars on Thursday afternoon, capturing the attention of the world.

On Thursday evening, the rover sent back its first image of its new home, a black-and-white shot that confirmed its safe arrival.

Perseverance will search for signs of ancient life on Earth’s neighboring planet, paving the way for eventual human exploration of Mars.